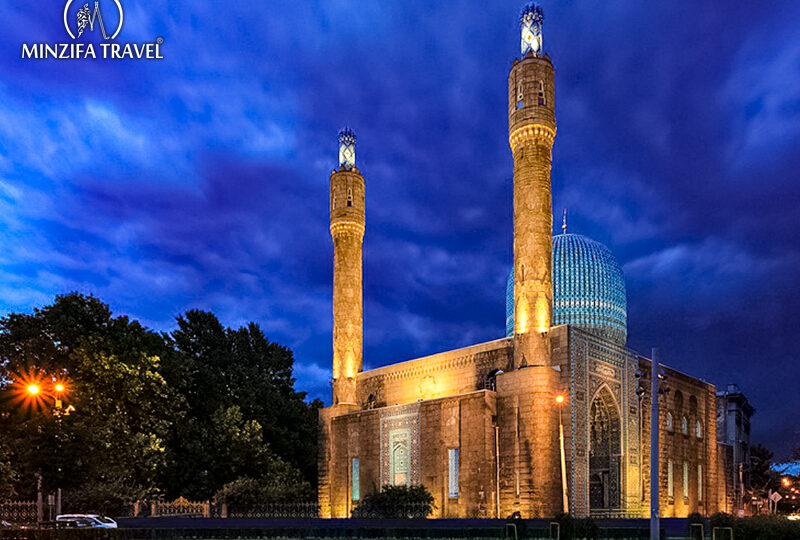 In 1881, the son of Bukhara emir visited Moscow and St. Petersburg and attended the coronation of Emperor Alexander III (1881-1894). In May of the same year the Muslim community appealed to the government for permission to build a mosque in St. Petersburg, but this issue was not resolved then.

The question of constructing a mosque was raised again in 1904 during the Russian Emperor Nikolai II’s meeting with the high envoy from Bukhara who arrived in St. Petersburg as Emir.

The question was then resolved in principle: Muslims were allowed to buy a plot of land to build a mosque. At the same time Bukhara emir donated 312 thousand rubles for the purchase of land on the St. Petersburg side.

Under the patronage of Emir, an architectural competition was held, and subsequently all the design and construction work was carried out.

At the competition the first and second prizes were awarded to the projects of the architect N.V. Vasiliev. Co-authors of Vasilyev were civil engineer S.S. Krichinsky, who dealt with structural problems, and architect A.I. von Gogen.

The ceremony of official ground-breaking of Cathedral Mosque was timed to coincide with the 25th anniversary of Seyid Abdul-Akhad-khan Emir of Bukhara rule and his visit to St. Petersburg and took place on February 10, 1910. On February 21, 1913 in the mosque, which was still under construction, the first solemn divine service was held in the presence of honorary guests (including Seyyid Mir-Alim Emir of Bukhara) in celebration of the 300th anniversary of the Romanov royal dynasty.

The outbreak of the First World War significantly slowed down the progress of work. In September 1915 the Cathedral Mosque was opened for paid inspection, thus money was collected for the completion of the temple.

In 1920, regular religious services started in the Mosque on one of the most important Muslim holidays of the month of Ramadan. During 1920-1921 a large hand-made consecrated Tauriz carpet was brought from Bukhara to Petrograd for the central hall – the last present from Emir of Bukhara. The 400 sq. m. carpet was an important element of ritual décor of the Mosque’s interior and was spread on the prayer hall floor (the floor of the central hall was never finished with parquet).

In the architectural solution

Moslem motives were used in the architectural design of the building.

The basic volume of a construction is focused by the altar on Mecca (the South), in conformity with Muslim traditions. The temple is topped with a raised ribbed dome on a cylindrical drum at the height of 39 meters, similar in form to the crowning Gur-Emir mausoleum in Samarkand. Along with the dome the characteristic image of the mosque is formed by two minarets 48 meters high. The main entrance from Kamennoostrovsky Prospekt is designed as a deep niche with a lancet arch. The niche of the entrance portal reproduces the shapes of the portals of the Shah-i-Zinda mausoleums.

The dome, the entrance portal, as well as the completions of the minarets during the construction were faced with colored tiles with complex geometric patterns, creating a colorful carpet of Central Asia.

The tile decoration, including sayings from the Koran, was created under the guidance of artist P.K.Vaulin. The walls of the mosque are faced with granite, which gives the building an austere look, typical of the works of the Northern Art Nouveau. Not only the picturesquely decorated portal, but also the oriental ornament on the windows contrasts spectacularly with the stone massif of the walls. The interior decoration was also made in the traditions of Muslim architecture.

In 1924 a part of the property of the Mosque was confiscated. A big carpet, four bronze lanterns, three chandeliers and furniture were confiscated and given to the Antiques. In June 1940 the divine services were stopped, the building was handed over to Leningrad Health Department as a storehouse for medical equipment. The numerous appeals of the believers of the Leningrad Muslim community in the post-war years, which numbered 15,000 people at the beginning of the 1950s, requests of the Indonesian President Dr. Sukarno, the Indian Prime-Minister Jawaharlal Nehru were effective and in 1955 the Mosque building was given to the Religious Society of Muslims.

On January 18, 1956, services in the Mosque were resumed. In 1968, the mosque was placed under the protection of the state as an architectural monument by a decision of the Executive Committee of the Leningrad City Council.

The Mosque has been used by the St. Petersburg Muslim community as an educational religious center since 1956. The internal layout of the mosque today is the same: the first floor has a large hall, where men pray, the second floor is reserved for women, and on the third floor there are classes of the Sunday school (madrasah), where lessons of Arabic and Tatar languages, as well as the basics of Islam are taught.

However, the building itself has survived a series of losses and alterations. In the 1950s, fragments of the majolica ornamentation in the lower parts of the northern and eastern portals were lost.

At the end of the 20th century, it became necessary to completely replace the old tile decorations. The complex restoration work, begun in the late 1980s, dragged on for a decade and a half. Today it is accepted to consider 1910-1913 (1914) as the date of construction of the Cathedral Mosque in St. Petersburg, but as a result of the latest researches this dating is considerably changed to 1909-1921. The new date covers the events from the ceremonial laying of the building in 1910 to the beginning of services in 1920. The same dates are marked on the portal of the building.

The Sobornaya Mosque in St. Petersburg was the largest mosque in Russia before the Makhachkala Dzhuma Mosque was opened, and according to various sources it accommodates from three to five thousand people.