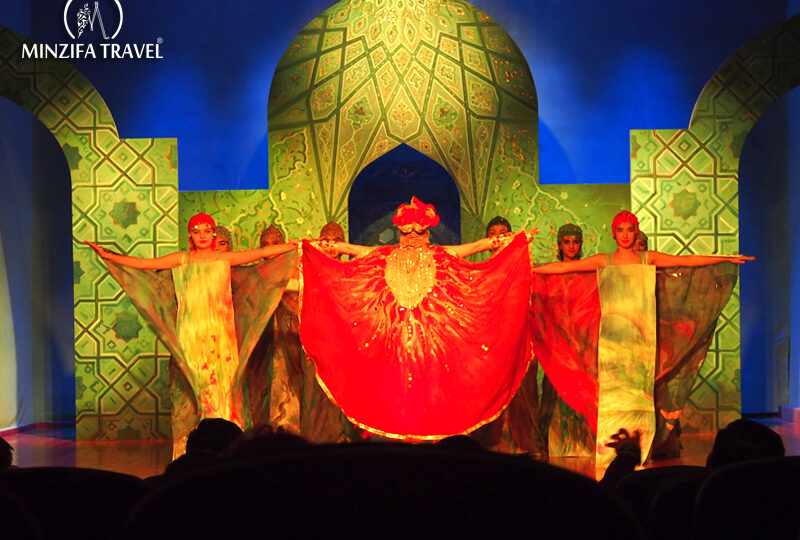 I would like to start with the words of Confucius, “Only he who, turning to the old, is able to discover the new, is worthy of being human. Representing national culture in France, Germany, Italy, Belgium (twice), Turkey (three times), Turkmenistan, Russia (twice), Korea, Japan and other countries, “El Merosi” Theater has taken a high place in the cultural life of the Republic. Numerous performances for foreign tourists, labor collectives, educational institutions and VIP guests also testify to it. The actors of the theater are the youth of Samarkand, students of universities, lyceums and colleges, the average age is 18 – 25 years old.

The law is simple and clear: everything new builds on the old, grows from it and is transformed into something new.

How can we learn about those who came before us. Who lived their century on the same earth that you and I walk, who left their mark on history, which we are now so interested to find?

All history sources can be divided into two large groups: physical and written. Labor tools, the remains of ancient buildings, burials, mines and sanctuaries, caves, ancient irrigation systems, jewelry, utensils – all that man has created, is for historians the most valuable sources. The rock drawings are of great interest for the researchers of the past. The drawings, carved on the rocks, painted with vegetable paints on the walls of caves and grottos, can to some extent provide an idea of the world around ancient man, his views on the world and on his own kind.

Authoritative evidence is written sources, which are vast and varied.

The unique heritage of our ancestors, traditional costumes of people of different epochs, different beliefs, different states represent the eternal dream of beauty, embodied in the articles of everyday life, jewelry, and especially in the creation of human appearance.

Clothes not only isolate a person from the external environment, but also, according to the beliefs of our distant ancestors, preserve and strengthen it with magical actions, often encoded in drawings and ornaments. The magic power of folk costume is so great that when you look into this treasury and realize its connection with customs, rites, with the origins of ancient culture, you feel esthetic delight. Folk costume becomes the chronicle of our ancestors’ life, which in the language of color, shape and ornament reveals to us many of the innermost secrets and laws of beauty.

The theatrical performance “A Moment of Eternity” begins with a dancing-musical number, where severe hunters of the Bronze Age (the end of the III-beginning of the II millennium B.C.) perform hunting scenes. Their costumes, made of coarse hand-woven fabrics, trimmed with leather and fur. were reconstructed from the materials of archaeological expeditions. This number has fragments of traditional ritual dances of peoples who worshiped nature and the spirits of birds, beasts and plants, for which there was more mysticism than knowledge.

They are replaced by nomads, whose costumes have more fur and leather, and spears in their hands were replaced by short swords – akinaks. The costumes of the middle of the 1st millennium BC were reconstructed based on the images on silver vessels and bas-reliefs of Behistun (Iran). The warlike “Scythians” depict a battle scene involving both men and women who occupied a high position in nomadic society.

The rhythmic, one might say aggressive, music leaves with those with whom it is so well associated, and the “golden” Achaemenids appear on stage. The smooth movements of the demonstrators match the dignity of aristocrats and royalty. Their costumes of the eighth and sixth centuries B.C. are based on the images on stone and majolica bas-reliefs of the palaces in Pars, Persepolis and Babylon. They are more complex and refined, with high headdresses, indicating the high status of the wearer. Various cults coexisted peacefully in the vast Achaemenid Empire, including the cult of the divine essence of Anahit.

The mythical birds with wings made of the finest fabric in different colors – these are the priestesses of Anahit. These costumes were reconstructed from the clay sculptural figures of Anahita found at the site of Afrosiab. The costumes are decorated with gold and silver cords, beads, and round plates. There are large turbans on the heads.

The Sogdian period is represented by King Chaganian’s embassy to Samarkand – introducing the princess and offering gifts. Royal person with an entourage of rich clothes decorated with gold and silver embroidery, paintings. The costumes of IV-VII centuries A.D. are based on the wall paintings of Afrosiab (Samarkand), Pendjikent (Tajikistan), Varakhshi (Bukhara).

The Sogdians were replaced by the Timurids (14th – 15th century AD). There is much more information about this historical period, as writing is widely used, generously “enriched” with illustrations (Babur-name, Zafar-name). The clothes of courtiers and noble ladies are made of velvet, brocade, lace, trimmed with golden laces and ribbons and richly ornamented. This time is considered the flowering of science, culture and poetry, which became an indispensable attribute of the palace receptions and festivities. It was this side of life of the inhabitants of the Temurid state that was shown by the actors.

The theatrical performance finished with a rite that has been preserved almost unchanged in the various regions of Uzbekistan up to now – weddings. The 19th century costumes are made of silk, brocade, bekasam and satin. Gold and silver embroidery is widely used both in women’s and men’s attire.

The performance program is harmoniously supplemented by classical national Uzbek dances performed by the theater soloists. For rather short term of its existence Theatre of historical costume “EL MEROSI” has received the deserved recognition not only in Uzbekistan, but also adequately presented national culture on tours in Belgium, Germany, Italy, France, Russia, Turkmenistan, Turkey, Republic Korea and Japan.