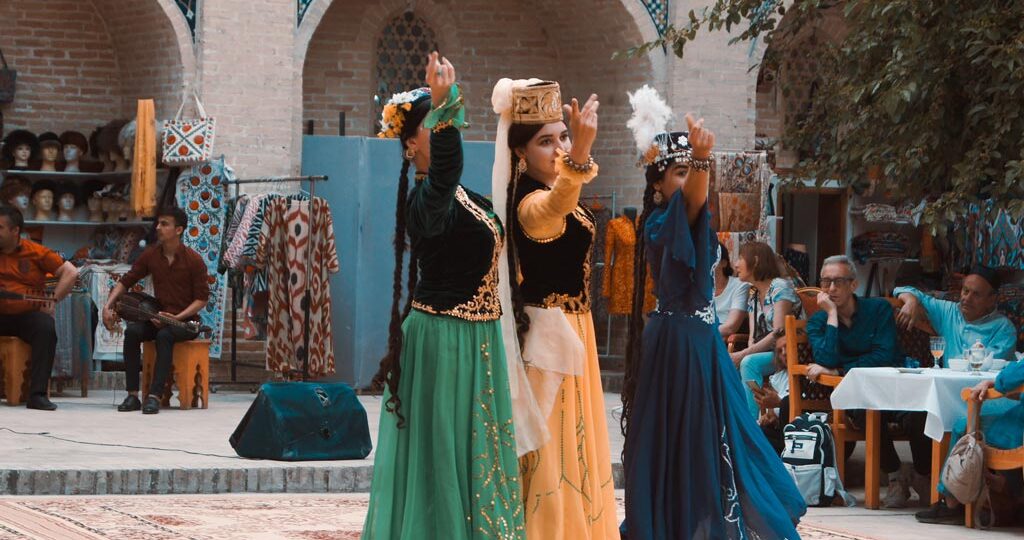 One of the main examples of the national culture of Uzbekistan can safely be called choreography. Local dances are as varied as possible: there are slow and rhythmic movements. You can learn more about the dance culture of the Central Asian country by visiting the folklore show on the territory of Nadir Divan Begi Madrasah during the spring tour in Uzbekistan, which was prepared by our tour operator.

What are the surprises at the show

The show takes place in the courtyard of an educational institution built by Nadir Diwan Begi, which is located in one of Bukhara’s central squares called Lyabi Hauz.

The event is held at sunset, when tourists have had enough excursions and can quietly enjoy the atmospheric show with a national flavor.

For travelers, the people of Uzbekistan prepare a graceful performance on a stage for dancing, which is staged in the large courtyard of the madrasah. Musicians are seated behind it. One can watch the show while sitting at tables that seat about two hundred guests. There are souvenir shops on the outskirts of the courtyard where you can buy accessories, clothes and other gifts for friends and family.

So, the sun goes down over the horizon, Uzbek music begins to sound around, the soloist of the ensemble introduces the guests to the national instruments (soz, gijak, doira, etc.) – an amazing folklore show begins.

The program lasts about one hour, during which the audience is presented:

During the magnificent concert guests are offered to taste dishes of national cuisine: famous Uzbek pilaf, kavurma-lagman, manty, sweets and others. Folklore show will help you to fully immerse yourself in the local color, learn the culture and get a closer look at the Uzbek traditions.

The ancient madrasah is located, as we said, in Bukhara. It is famous not only for its architecture, but also, of course, for its folklore show. This place is one of the favorites for locals of the pearl of Uzbekistan and tourists. Inimitable atmosphere helps to learn the peculiarities of Uzbek people and their traditions to the full extent. In 1993 the Muslim place of worship was included in the list of UNESCO.

Complex Nadir Divan Begi includes an artificial lake, a Muslim school and Sufi cloister. The building was built by an Uzbek dignitary who was in the service of Imamkuli-khan, the Khan of the Uzbek Janid dynasty.

Nadir Divan Begi began to construct the building in the 17th century. Initially he built a courtyard for caravans, but at the very opening he announced that it was a madrasah. As a result, the building was completed with a loggia, a portal, towers, rooms for students, etc.

We offer you to book a tour to Uzbekistan in the spring, which will last a full 11 days. This time is enough to get acquainted with the ancient cities of the eastern country, to know the real Oriental hospitality, to try the national cuisine and of course to visit the folklore show.

We’ll set off with you to Bukhara to see with our own eyes amazing national dances, listen to the music and admire the fashion delights of local fashion designers. We will provide you with a rich program that will leave only vivid memories in your memory.