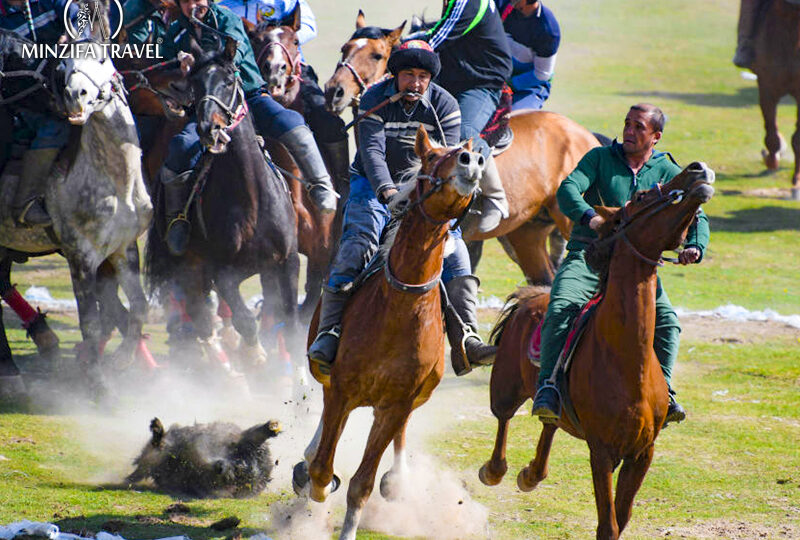 The equestrian competition among the peoples of Central Asia – kupkari – (In translation from Turkic “kup” means “many” and Persian “kari” – “deed, work”, i.e. “deed of many”). In Uzbekistan the kupkari competition is also called ulak, buzkashi.

In this game, skillful riders compete for the carcass of a goat or a young sheep: the winner shall reach the finish line, not allowing other riders to discard the prey.

Usually kupkari is carried out in spring or autumn when Central Asians traditionally celebrate their weddings and holidays of spring, Navruz and Nauryz.

They prepare for kupkari beforehand and very carefully. Often dashing riders from neighboring regions take part in the kupkari. They choose a strong and sturdy horse of low stature. Low one was chosen to make it easier to pick up the carcass of animal from the ground because it often falls down on the ground in the heat of struggle.

For kupkari the riders wear protective helmets, quilted cotton robes and pants. Since during competitions jigits, getting into excitement, hit each other with a whip, which is not forbidden by the competition rules, such outfit helps a rider a lot.

Photos of the horsemen’s scrum!

Kupkari participants line up in one line and wait until the village elder or other respected man in the neighborhood leaves the animal carcass in the center of the circle and gives the signal to start the contest.

Then dzhigits strive to be the first to grab a lamb or a goat from the ground and reach the finish line without losing their trophy and at the same time fighting off rivals who try to take their prey.

The grand prize is a car!

The first rider to reach the finish with the trophy receives a valuable prize. In the olden days it could be a colorful carpet, bulls, rams and goats, or cut-offs of expensive fabrics. Nowadays the prize for the winner of a kupkari may be, for example, expensive household appliances or even a car.

There were generous prizes waiting for the winners – dozens of camels, carpets, household appliances, and the main prize was a car.