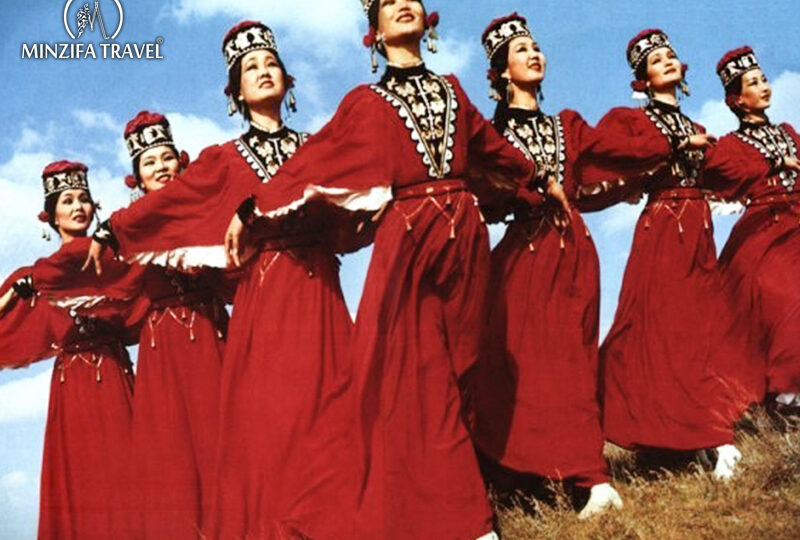 Self-name is khalyig. The people, the main population of Kalmykia. The language is Kalmyk of the western subgroup of the Mongolian group of the Altai family. Believers – Buddhists, there are Orthodox.

The time of the first appearance of Kalmyks (Oirat, or Western Mongols) in Uzbekistan is difficult to determine. It is known that already at the beginning of the 17th century they penetrated into Turkestan with conquering aims.

In 1620-1630s Kalmyks-Torgauts conquered considerable areas of Western Kazakhstan. In 1635 Batur Khuntaiji made a campaign to Semirechye.

But there were other motives for migrating as well. After Kashgar was conquered by the Chinese and the Kalmyk state of Dzungaria (1658-1760) was defeated and ruined, some of the Kalmyk nomads moved west and were forced to invade the Fergana Valley in order to survive.

There were also cases of free resettlement of small groups of Kalmyks to Turkestan to unoccupied lands. There is reason to believe that they reached Andijan at the end of the 17th century. There is quite a lot of written and oral evidence of the presence of Kalmyks in what is now Uzbekistan. In the 18th century they repeatedly attacked Tashkent. It is known that in 1743 the Kalmyk troops, numbering four thousand soldiers and commanded by Agatsak, laid siege to the city for 40 days. Captive Kalmyks were part of the army of the Tashkent state in the 18th – first half of the 19th centuries.

Among the surviving groups of the Kalmyk population of Uzbekistan of particular interest is a group of Kalmyks (Sart-Kalmaks, Kara-Kalmaks). In Uzbekistan, as well as in South Siberia, there were also Turkic-speaking Teleuts, called Ak-Kalmaks, or White Kalmyks. The time of their appearance in this region is attributed to 1864, but they probably appeared here even earlier.

Analyzing the ethnonym “Sart-Kalmak”, scientists paid attention to its composite character, and consider the presence in it of the component “sart” as an indisputable evidence of the process of ethnic mixing of Mongolian- and Turkic-speaking Kalmyks with Turkic-speaking Sarts, which started already in Dzungaria.

Having settled in Turkestan, the Sart-Kalmaks consolidated as an independent ethnic unit – a national minority. They preserved their self-consciousness, their language (in the 1920s, the Kalmyk language was even taught in schools), traditional folk culture, etc. At the same time, the Sart-Kalmaks borrowed a lot from other ethnic populations in the process of contacts with them. Under the influence of Uzbeks and Dungans, farming became one of their main occupations. The type of settlements, dwellings and household constructions changed fundamentally. Their belonging to the same economic and cultural type and religious community determined the tendency of their greatest rapprochement with the Kyrgyz in the Fergana Valley, including through mixed marriages. This fact contributed to the development of Kalmyk-Kyrgyz bilingualism among the Sart-Kalmaks and even to the loss of their native language. However, at present, it seems more correct to speak about the ongoing process of intensive rapprochement between the two peoples, rather than about its completion.

Probably, the Kalmaks also distinguished themselves from the Oirat by their religious affiliation. Coming into contact with the Sartes, the sedentary agricultural and urban population, they mixed not only ethnically, but also converted to their faith – Islam. This is how the ethno-confessional group of Sart-Kalmaks was formed in the Oirat (Oletsk) ethnic community.

During the Second World War, the Kalmyks were deported to Uzbekistan among other peoples. In March 1956 restrictions on their movement were lifted. But local authorities were obliged to fix the Kalmyks in the Central Asian region, excluding the possibility of their mass departure.

There are few famous people of Kalmyk origin in Uzbekistan. General Oka Ivanovich Gorodovikov (1879-1960), a Kalmyk by nationality, was elected to the government of Uzbekistan. In the pre-war period, he was commander-in-chief of the Central Asian Military District.

In 1962, a Kalmyk Georgy Dorjin graduated from the architectural department of the Tashkent Polytechnic Institute.

A Kalmyk woman, Beta Dodonovna, worked at the Republican Institute for Advanced Medical Training for a long time. Many Kalmyks worked as chauffeurs, technicians, handymen at the Tashkent Underground Construction, etc. It is noteworthy that many of them, according to the stories of their coworkers, were proud to emphasize their Kalmyk origin whenever possible. In the middle of the last century, poetess M. Zemskaya visited a leprosarium in Karakalpakstan, where she met Pavel Batmaev, who worked in that institution as an accountant. And she published her notes about this meeting: “Pavel Batmaev is a Kalmyk, he speaks Russian* slowly.

His facial expression outstrips his speech…” His fate was unusual: “I was a journalist. I wanted to write an article about the disease. I went to the place – to get acquainted with the material, and stayed there.