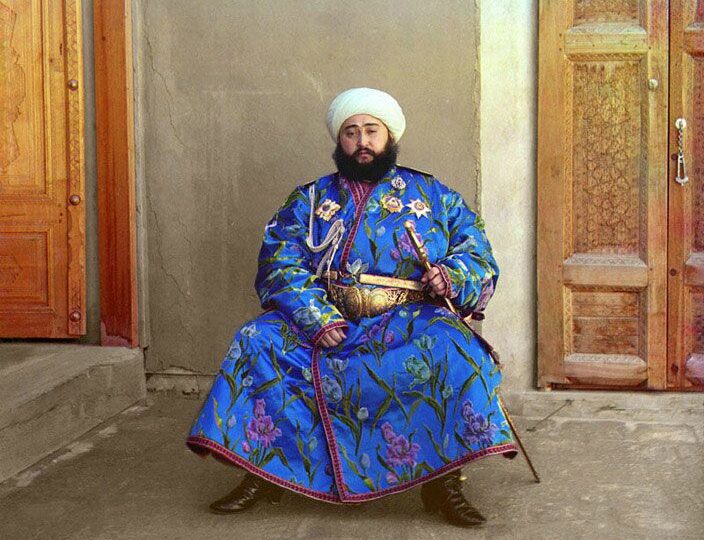 The last emir of the Bukhara Khanate, who fled his homeland

Did you know that the last Emir of Bukhara, Seyyid Mir Mohammed Alim-khan, was the tenth and last representative of the Turkic Mangyt family, which ended the dynasty of Uzbek Emirs who ruled the Bukhara Emirate from 1746 to 1920, until Bukhara Khanate was captured by the Red Army, which established its government in the Khanate?

The last Emir of Bukhara was born on January 3, 1880 in the holy city of Bukhara. When he was thirteen years old his father, Abdulakhad-khan, who ruled the khanate, went with his son to St. Petersburg and sent him to the cadet corps of the Nikolayev Regiment. Abdulakhad-khan personally negotiated with the instructors of the school about the curriculum for his son. The Emperor Alexander, considering the emir’s insistent request to comply with Islamic norms, promised to fulfill it. But in spite of the set time of the educational program in the corps Abdulakhad-khan wished his son to finish his studies in an accelerated mode, as he did not want the young heir to get acquainted with the achievements and life of European culture that could shake his Islamic foundations. Thus, in the summer of 1896, after three years of study in Russia, Seyyid Mir Muhammad Alim-khan returned to his native Bukhara with a diploma and confirmation of the status of the heir to the power of Bukhara Khanate.

It should be noted that the last emir of Bukhara during his studies did not differ with special zeal neither for sciences, nor for military activity. He liked to spend his time idly. He bred pigeons, played musical instruments, and liked fast riding on phaetons (light carriages with a hinged top). But upon arriving in his homeland, he had to take up government work. In 1898, he was appointed governor of the city of Nasef (modern Karshi) by his father. He held this post for 12 consecutive years. Then for the next two years he governed the district of Kermine.

The last emir of Bukhara, Seyyid Mir Mohammed Alim-khan, was titled “Highness” by Emperor Nicholas II in 1910. After the death of Abdulakhad-khan, his father, the heir to the throne took the place of the emir of the Khanate of Bukhara. A year later, in 1911, already in the position of ruler of the Emirate of Bukhara, Seyyid Mir Mohammed Alim-khan was promoted to the rank of major general and was included by the emperor to the list of retinue of His Imperial Majesty Nicholas II.
The last Emir of Bukhara began his reign by declaring that he strictly forbade any gifts to him, and also forbade the subjects of his khanate to take bribes and use the state treasury for personal purposes. But after some time this situation in Bukhara khanate changed. The officials who supported the emir’s side were subsequently expelled from the khanate. He remained to rule the Bukhara Khanate in the traditions of his dynasty.

The last emir of Bukhara, Seyid Mir Mohammed Alim-khan, ruled the Bukhara Khanate until September 1, 1920. At that time Bukhara was seized by the Red Army, after which the emir and his most loyal subjects fled first to the mountains of Kashkadarya, and from there to Afghanistan, where he tried to gather resistance against the power that had come to Bukhara.

By the way, one of the treasures that the last Emir of Bukhara took with him to Afghanistan was a herd of karakul sheep, which became the progenitors of today’s Afghan karakul sheep. The emir spent the last years of his life in ill health. Almost completely blind, he became an old man caraculist. All his bank accounts were blocked, and he was only able to take with him a tiny portion of the treasury, which, according to scholars, he did not manage to bring to Afghanistan.

The last Emir of Bukhara died on May 5, 1944. He was buried in Kabul in the Shuadoi Solehin Cemetery. Before his death, he willed that an inscription be carved on his tombstone which reads: “The Emir without a homeland is pathetic and insignificant. A beggar who died in his homeland is truly an emir.

It is known that the descendants of Bukhara Khan are settled all over the globe. Three of his sons renounced their father in 1920 and went to Moscow. The children, from the last marriage contracted in Kabul, lived in Afghanistan with their mother until the Red Army seized power there in 1979. They then had to flee to Pakistan and from there to Germany and the United States.

The last emir of Bukhara, Seyyid Mir Mohammed Alim Khan, who considered himself a descendant of Genghis Khan and the last of the Mangit dynasty, died without ever having visited his homeland of Bukhara.

Want to see and learn more? Come to Uzbekistan