We are open 24/7 in case you'd like to speak to a travel specialist.>
Give us a call at +998936591107 or send a request by mail Enquire by email
Home➜Destinations blog➜Central Asia Blog➜Tajikistan Blog➜Travel to Iskanderkul – tours and attractions 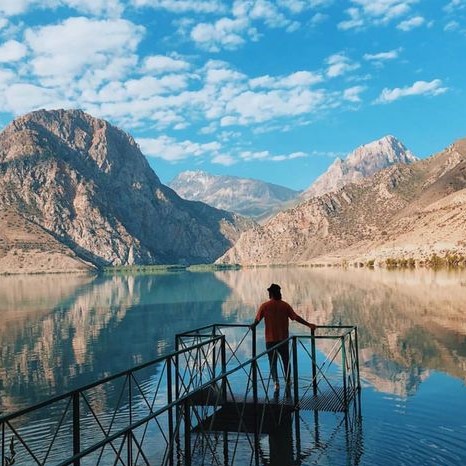 Iskanderkul is Tajikistan’s calling card and the most photographed place in the country. To visit an Asian country and not visit Iskanderkul is like coming to Paris and not seeing the Eiffel Tower, visiting London and not riding the red bus, going to Rome and not admiring the Colosseum. The list could go on and on, or you can just go on an unforgettable trip to Tajikistan with Minzifa Travel!

What to see in Iskanderkul?

According to one legend, serious resistance awaited the commander during his march: the villagers did not want to surrender. Alexander became angry, changed the course of his arm, and flooded the village. This is how the reservoir was created.

According to the second legend, the commander made a halt, and the faithful horse, after drinking cold water, fell ill. After recovery, the horse threw himself from the rock: now every full moon, a white horse runs out of the water and grazes on the green shore.

Nearby is the Snake Lake. Locals say that there are snakes in its waters, hence the name. The old-timers say that the snakes in the lake are not dangerous in two cases: when drinking water and when sitting in the water. The skeptics are sure that there are no snakes in the pond and the name was invented just to attract tourists. However, it is well-known that the water in the Snake Lake is much warmer than in Iskanderkul, and one can swim there in summer.

Near the lake there is an old juniper tree, and instead of pine needles there are leaves growing on it. Everyone who comes to look at Iskanderkul, leave ribbons on the tree to come back again.

Special attention of tourists is attracted by the waterfall “Fanskaya Niagara”. It is located on the river flowing out of the lake. It is a gloomy and narrow canyon, which can be admired from the observation deck: you can see the rainbow perfectly from here.

The lake area has a moderate continental climate: many sunny days and almost no precipitation. The weather is warm and dry in summer, frosty and cold in winter. In the off-season, the Iskanderkul area is windless – a classic golden autumn and green spring.

When is the best time to go to Lake Iskanderkul?

Iskanderkul is beautiful at any time of year:

Only tourists who have seen it with their own eyes can argue that Iskanderkul is the pearl of Tajikistan: they confidently call it a diamond. For tour bookings and prices please contact Minzifa Travel on WhatsApp, email travel@minzifatravel.com. The memories of the lake will stay with you for a lifetime!