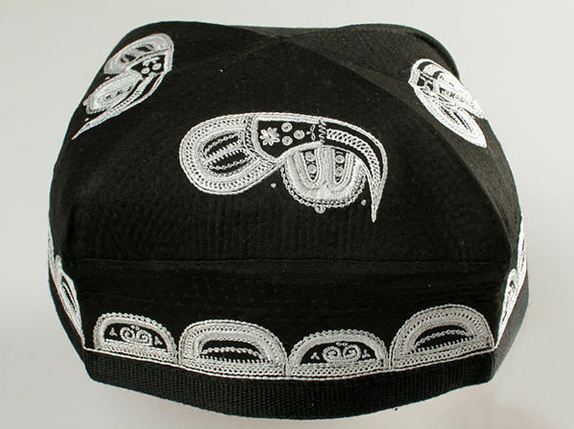 “With you we are tied forever, like a skullcap and an Uzbek!!!”

Traditional Uzbek headdress – an Uzbek skullcap – is one of the symbols of Uzbekistan because it is hard to imagine an Uzbek without it. It is not without reason they say: “We are connected with you forever, as the tyubeteika and the uzbek!” Despite of the fact that this headdress is worn all over Central Asia, in Turkey, in Tatarstan, in Mongolia, in Azerbaijan and in other countries where Islam is the prevalent religion, in Uzbekistan the tyubeteika became an integral part of the closet on all occasions. And today everybody wears the tyubeteika – from small to large, men and women. Though originally it was not so.

For a long time Uzbek tyubeteika was considered to be exclusively men’s headwear. According to one of versions, history of tyubeteika has roots in far past to the Turkic nomads. In those ancient times, one of the elements of the tribal nomads’ outfit was a felt helmet, which was worn under the combat helmet. As time passed, the nomads began to settle in the territories and their uniforms became unnecessary. Probably for this reason, some elements of their military clothing underwent changes. Over time, the helmet became just a headdress, of course, male (a cap that covered the top of the head). But its shape, which repeated the shape of the cone-shaped Turkic helmet, remained unchanged for a long time. Today the shape of the tyubeteika is very diverse (peaked, cone-shaped, flat, square and round, high and low). The word “tyubeteika” in the basis has a word tobe/tope/tube – from the Turkic language it is translated as “top of the mountain”, and in figurative meaning – “top of the head”.

The most widespread Uzbek tyubeteika is “duppi”. It represents a tetrahedral tyubeteika made of black silk or satin on which white silk threads are embroidered with patterns. It is necessary to note that from the times of Turkic nomads, the tyubeteika acquired a deep meaning. Masters who made the tyubeteikas embroidered patterns on them not without reason.

For example, the Uzbek tyubeteika “duppi” is usually decorated with traditional pattern “bod” – an almond, which is embroidered on each of four edges of the attire and is a symbol of fertility and protection against evil forces, no matter from what side of the world they were directed. The lower part of the tyubeteika is decorated with embroidered elements in the form of arches with the base on the whole circumference. The number of arches is 16. The arches alternate between two kinds – a small arch with the embroidered symbol of the cradle in it with some dots above it means the birth of a new life. A large arch with an inner line of dots signifies the end of life. The dots inside this arch signify the light from the person leaving. The difference in size between the arches means that from birth to death a person goes a long way in life.

The Uzbek skullcap, the black and white “duppi”, is an integral part of some customs and rituals. In medieval times a faithful Muslim was not allowed to appear in public without a tyubeteika. Today, Muslims do not often wear it in everyday life – on special occasions and on Muslim religious holidays. But even today a Muslim entering the mosque is obliged to cover his head with the tyubeteika, and he wears it at home during the prayers. Funerals and funerals also call upon Muslims to wear the tyubeteika. The wedding ceremony is also an occasion for the groom and his father to put the tyubeteika on their heads. A mullah puts the tyubeteika even on the newborn baby, thereby blessing him and asking Allah for the child’s good health.

But with time women began to appreciate all the charm of this headdress. The female Uzbek tyubeteika is notable for its colourfulness and variety of embroidery pattern on it. What female Bukhara tyubeteika embroidered with golden threads is worth of. It is not a shame to appear in such tyubeteika at the wedding ceremony! No matter what you say, but though the tyubeteika is a man’s hat, nevertheless, women and girls look even more beautiful in women’s tyubeteikas.

Anyway, you cannot do without the tyubeteika in Uzbekistan!