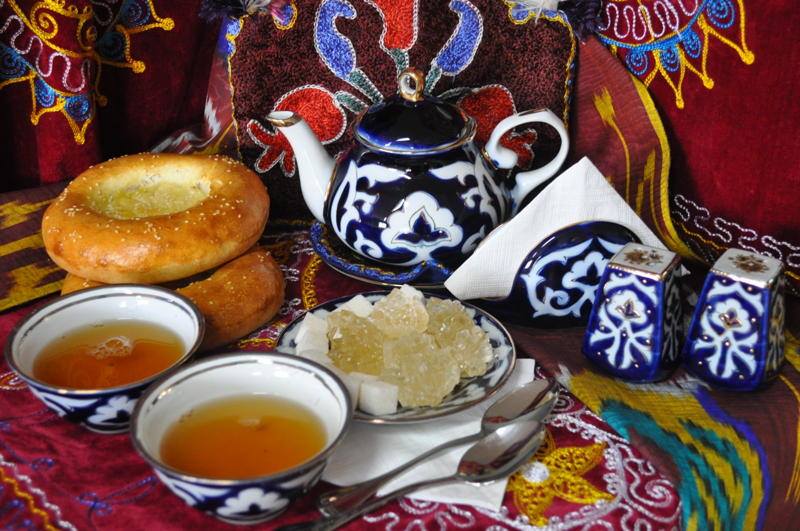 Uzbek tea drinking cannot be called a tradition. It is rather an integral part of life of every Uzbek or even every person born or living in the East, regardless of their nationality, gender and age. It is an inexplicable ubiquitous love for the tea-drinking ceremony in Uzbekistan in particular. As sung in the old song sung by Farukh Zakirov and the Uzbek ensemble “Yalla”: “In the East, in the East, what is life without teahouse!”.

The Uzbek tea party, whether it is at a teahouse or at home with the family, has the same motifs. In Orient they say: “If you are tired – drink tea, if you want to cheer up – drink tea, if you want to communicate with your friends on all possible topics – drink tea…”. The list could go on and on. For in Uzbekistan any event or action is accompanied by tea drinking. By the way, in Uzbekistan people prefer green tea, because it can keep you warm during cold weather and quench your thirst during hot season.

Uzbek tea-drinking in teahouse is quite a separate branch of life. Since ancient times people have come to tea-houses not only to quench their thirst with divine drink, i.e. tea, but also to socialize. And communication in a teahouse took place exclusively in a pleasant and quiet atmosphere. Here the latest news and hot topics were discussed. Here it was possible to meet new acquaintances. Under the shady crowns of trees, near the murmuring spring or the river people spent their time serenely. Nobody was in a hurry. And there was no hurry when all the most interesting things could be found out here, in a teahouse. According to the established rules the tea-house manager made sure that all his visitors were served. By the way, it should be noted that the skill of a tea-house attendant was quite popular and even prestigious, because the whole district came to the tea-house and the tea-house attendant knew everyone. And everyone knew him. He determined what kind of tea one or another guest would be served.

Uzbek tea drinking at home did not differ in any way from the previously mentioned. In Uzbekistan, tea is the beginning of a meal and the end. Every guest, whether he has just dropped in for a minute or arrived from far away for a long time, is welcomed and treated to tea. Tea is served before the meal in order to tune in to the meal. Tea is also drunk after the meal so that the food can be better absorbed. But in every home every housewife is sure to find a delicious tea and sweets to go with it. By the way, in Uzbekistan, if you go to a teahouse or visit someone in the morning, you will be treated to such a breakfast: freshly baked flatbread, grapes or other fruits and, of course, freshly brewed green tea. It is not without reason that people say: “If you don’t drink tea, where do you get your strength from?

Uzbek tea drinking has a peculiar ritual of brewing tea. Freshly brewed water should boil well. Then the kettle is poured with boiling water to warm it. After pouring out the boiling water, a “good” pinch of brewed tea is put in the teapot and poured over one third of the volume of the teapot with hot water. Then leave it for 2-3 minutes. After pouring another third of the teapot and again let stand for 2-3 minutes. The last third is poured by lifting the vessel with hot water to different heights, to “lift” the teapots from the bottom of the kettle.

Uzbek tea drinking begins with the fact that the youngest of those present at the table makes “kaitar”, i.e. pours tea from teapot into a bowl (it is from them that people drink tea in Uzbekistan) and back. This action is performed three times. In Uzbekistan, they believe that the first bowl poured during “kaitar” is clay, the second one is oil, and the third one is tea itself. After having done all these actions, the tea-pourer lets the tea bowls settle to the bottom and only then pours the tea into the bowls and distributes them to the guests with one hand to his heart. It is very important that the tea is poured into the tea bowl by a third! If you pour a full tea bowl, it is a sign of disrespect to the guest and implies a desire that he would finish it as soon as possible and leave.

We can talk about Uzbek tea drinking endlessly. But what to say, when you can come and become a witness of this integral part of life and culture. Come and visit us in Uzbekistan!