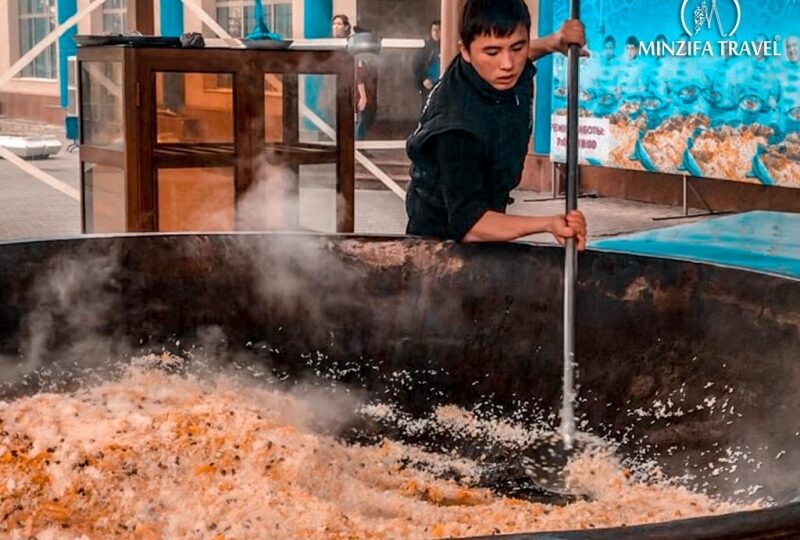 Pilaw is one of the oldest dishes, which supposedly appeared in India or the Middle East more than 2 thousand years ago. Nowadays, plov is considered one of the most popular dishes in Central Asia, Asia Minor, Transcaucasia, Turkey and the Middle East. Even Alexander the Great himself, when he was in Samarkand, wrote in his biography that he had tasted this wonderful dish.

And as the old saying goes, like the recipe for pilaf, “If I have to die – let it be from pilaf.”

In this article we will tell you where in the capital of Uzbekistan you can taste one of the most delicious types of plov. You will learn how it is cooked and get acquainted with the traditions of eating it.

There are more than a thousand recipes of pilaf in the world, but the technology of cooking pilaf, always remains the same. Incredible and unique taste of pilaf is created by a precise combination of two integral parts – zirvak and rice respectively. What is zirvak, you may ask? The answer: Zirvak is a garnish to a pilaf of meat, onions, carrots, and other vegetables. Spices added to zirvak are barberry, cilantro, garlic, quince pieces, and salt.

In Uzbekistan, it is common to cook pilaf according to the “Central Asian type” when zirvak and rice are combined together for further cooking.

When visiting the capital of Tashkent during your trip to Uzbekistan we strongly recommend you to visit “Central Asian Plov Centre”. If you have not tasted pilaw in the Center of Plov, then consider that you have not been to Tashkent!

Central Asian Plov Center is situated near the TV tower which you can also visit, right after having a delicious lunch. We recommend you to go for a walk after a heavy lunch, it will be just right!

Central Asian Plov Center has at its disposal five big cauldrons with the capacity of up to three tons each! Five first-class oshpaz (pilaf masters) as well as several assistants, and the assistants cook pilaf almost better than anyone else in Uzbekistan, so one can say with confidence that the best of the best have been gathered at the Central Asian Pilaf Center.

Usually plov is cooked by 11 am, as in Uzbekistan it is customary to eat it during lunch time. If you decide to go after 2 o’clock in the afternoon, most likely there may be no more pilaf, as it disperses in a matter of minutes after cooking. The price of one portion of pilaf is 16,000 to 18,000 soum (≈$2-3) on average.

Pilov can be tasted in the building itself, there are also salads and drinks inside, there is no alcohol. And you can also take the pilaf in containers. Many locals come with their own containers and take 20-30 servings per office or family at once. If you choose to eat on the spot, you don’t have to wait in a queue but you can just sit down and let the waiter bring everything and then you will get 10% more of your order. You can also choose to decorate your pilaf with boiled quail eggs and kazy (horse meat sausage).

What is the secret of making real Uzbek pilaf that people from all over the capital come to see? We tell you. First of all, it is a classic recipe by which the best masters of the Central Asian East for centuries and cooked the best pilaf in all of Central Asia. Then you have a choice of selected rice from Khorezm, yellow carrots of “Mushak” variety from Syr Darya, chickpeas from the ecologically clean mountains of Fergana valley, the only suitable for pilaf variety of Samarkand raisins from Chelak area, a strict ratio of spices, fresh lamb and beef (if you prefer) straight from the slaughterhouse. And, of course, the hand of the master is important! The products here are all the freshest; they are delivered not in the evening but in the early morning.

And after you have eaten a portion of tasty Uzbek pilaf, you should definitely drink a bowl of freshly brewed green tea, which no dinner can go without.