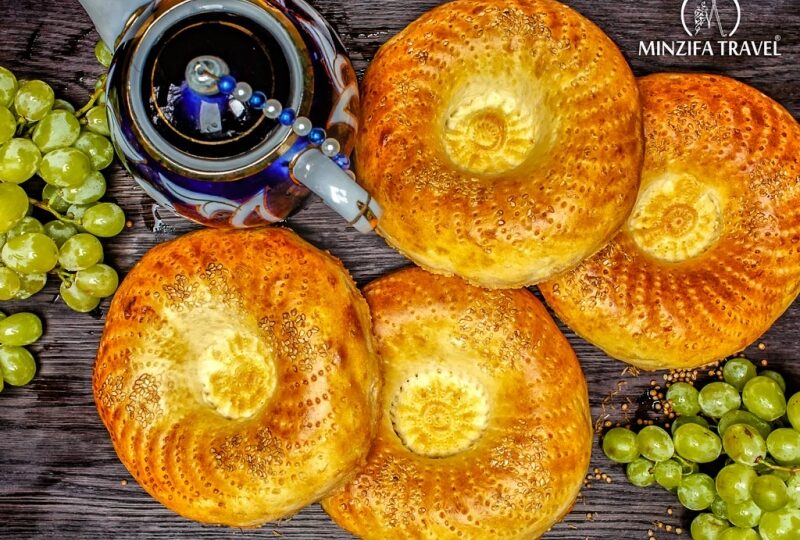 Uzbek cuisine is very rich and abundant in many delicious and flavorful dishes. Every sophisticated gourmet will find a dish to his liking, whether he is a meat-eater or a vegetarian. Today we want to tell you about five dishes that are great for vegetarians and for meat lovers as well. Let’s go!

The first dish we want to tell you about is the famous Uzbek Samsa or as it is also called in Uzbekistan “Kadu Somsa”. But this samsa is prepared with pumpkin. After the meat samsa, this is the most popular flaky pie in all of Uzbekistan. Delicate dough, sweet and spicy filling, the warmth of the clay oven – all this is about the Uzbek samsa. There is, however, one “but” in this seemingly vegetarian dish. The dough in Central Asia is often greased with sheep fat, not with our customary butter. So before indulging in pumpkin samsa, make sure you have not used any homicidal products in its preparation.

Traditionally, puffed samsa with pumpkin or other suitable filling is baked in a special oven – tandoor, but the dish comes out great in electric or gas ovens.

Everyone who has ever tried an Uzbek hot lepyoshka. And now we suggest you turn on your imagination a little bit. Imagine the following picture: a hot lepyoshka with white or black sesame seeds, fresh from the tandyr, fragrant, ruddy, with a crispy golden crust, the freshest kaimak (something like thick cream) and green tea. This is what an average breakfast in Uzbekistan is like. Uzbek flatbread can be eaten with any dish or drink.

Respectful attitude to bread is in Uzbeks’ blood. After all, any meal or feast begins with the ritual of handing out bread. The eldest in the family always breaks the loaf, and then hands it out to those gathered. Scones should never be cut with a knife or placed “face down” – it is disrespectful to the bread. There is nothing more terrible than breaking an oath that was pronounced on the bread.

Traditionally, Uzbek flatbread is baked in a tandyr oven: the clay walls are moistened with salty water to prevent the dough from sticking, and taken out with a special scoop after eight to ten minutes. Sometimes onions and herbs are added to the dough, and then the flatbread becomes even tastier. It is not for nothing that bread is sacred in Uzbekistan – such flatbread is really worth worshipping. In every region of Uzbekistan you can try different types of lepyoshkas. The most popular type of lepyoshka is Samarkand lepyoshka.

Sumalak is a healthy and delicious dish for the spring holiday of Nowruz (New Day). It has the property to restore strength lost during the winter and gives a sense of vivacity. Sumalak is an ancient dish and takes pride of place on the rich dastarkhan of Nowruz. The dish has several versions of origin of the name “sumalyak” (sumalek, sumanak, sumalak) “Suma” – in the ancient Turkic dictionary is translated as “wheat/barley steamed for malt”, and “laks” – “wheat flour”. According to another version, “sumalak” means “30 angels” and was invented by a poor woman who was helped to make it by the angels themselves (according to legend). Sumalak is a folk dish, as nowadays nobody knows when and by whom this healthy wheat delicacy was made. However, every year on the 20th of March, one can see the following picture: huge cauldrons, cauldrons around which all day and all night long the sounds of fun, songs and dances do not cease – it is “Sumalak Sayli Holiday”, which calls people to friendship, brotherhood and unity.

Culinary traditions of any nation are related to the natural conditions of the region, historical development and religious views of the people. This is their originality and unique flavor.

The seasonal use of food is of no small importance in a healthy diet. Nature itself dictates our menu. Climatic conditions in Uzbekistan allow us in early spring to have fresh herbs and vegetables, as they say “from the patch”. And the last hot days give an occasion to cook chalop – a kind of okroshka, but lighter and healthier.

It is made of greens and vegetables, and dressed with diluted chakka (fermented milk product). The obligatory presence of rajon (basil) and half a clove of garlic make the chalope fragrant and tasty.

The real Uzbek pilaf, of course, is with meat, but this lean version is also cooked in the country. Vegetarians – if they used to be meat-eaters – sometimes miss that very same pilaf, with lamb, on sheep fat, with a wonderful “smell of pilaf,” so strong and clear that it cannot be confused with anything else. This kind of pilaf without a single piece of meat will let you enjoy the familiar smell. And the flavor won’t disappoint either.