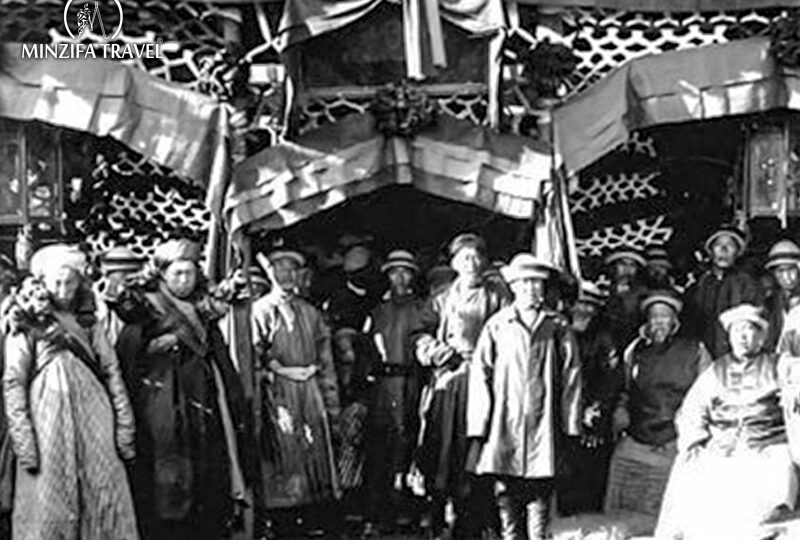 My parents grew up and lived in the village of Karakunuz (now the village of Masanchin) in the Kurdai district of the Jambul region in Kazakhstan. My mother was widowed early: her young husband died of a serious illness. Chinese tradition did not approve of widows remarrying. There is a saying on this occasion: “A good horse does not wear two saddles, a good woman does not marry a second time. Following it, many women, left without a husband, refused to marry again. And at that time (late 19th century and up to the 1930s) the custom of widow’s abduction was very common among the Dungans, which was due to the shortage of women. In addition, the marriage of widows through abduction gave them an opportunity to transcend tradition and save face: I didn’t want to, I was forced to.

The danger of actual theft forced the household to watch over my mother day and night. According to the old custom of the levirate, the yuyso, a widow was supposed to marry her husband’s unmarried younger brother-in-law. But the brother-in-law (my future father) was very young: he was then about 11 years old. However, the threat of the theft of my daughter-in-law forced me to hurry. Thus, a 19-year-old woman married: to a boy. His mother did not take him seriously for a long time and often beat her young husband. Then the family council decided to send the hapless husband to study in a madrassa. After five years, Dad came back, and the parents began to live a normal married life.

In those days bigamy and polygamy were widespread among the wealthy Dungan. In addition, in my male relatives this custom developed into a tradition. After some time, my father also took a second Dungan wife.

Here it is appropriate to cite family legends describing relations, in particular between men, in our family. My father did not have a native brother, but he was replaced by an older male cousin. And in those days no distinction was made between siblings and paternal cousins. My father was a rather complicated man, so he always found a reason to quarrel at home, and sometimes he even let his hands loose. When the scenes became too violent, my mother would threaten to complain to his older (cousin) brother.

As a rule, my father calmed down after that, but if not, my mother would call my brother for help. He, without thinking twice, got on his horse and with a whip in his hand, raising the noise, rode up to the house of his younger brother, but, approaching, was not in a particular hurry, allowing the latter to slip away. And indeed, when he heard the clatter of hooves, Dad ran out of the house through the backyard.

My father’s older brother, pretending not to notice anything, drove menacingly into the yard. The women complained, he agreed, and threatened the safely escaped brother with a raised fist. Thus, with general satisfaction, the family scandal ended. The women were reassured by the fact that their abuser had been dealt with. Daddy was reassured by bending to the will of his older brother. And he did not hesitate to tell his friends about it, in fact, even proud. The older brother was glad he had settled the family quarrel without damaging the authority of the younger one.

At the beginning of the 1930s our family, including my father’s second wife – we called her our aunt as mother’s sister – moved to Tashkent. Here soon he married (naturally, without registration) two more women: an Uzbek and a Russian.

Regretting his marriages until the end of his life (he lived 51 years, with a one-year-old grandson), my father never wore a khun (wedding bandage when marrying a girl) at his wedding: all his wives were either widows or divorced.

The severe famine of 1933 forced our family to pack up in search of a better life. We decided to go to China, following our great-uncle. Our belongings were packed and we arrived in Tashkent to arrange the necessary documents. But soon it became known that by the decision of the authorities, the border was closed. So we stayed in Tashkent. We thought it was temporary, but it turned out to be permanent.

In the mid-30s, when I was about 11-12 years old, we lived in the mahalla “Chagatay-Darvoza” in the old city part of Tashkent. Our family consisted of six people: father, mother, father’s second wife and us three children. I was the eldest. Dad was engaged in trade. He brought goods from Frunze (now Bishkek), mostly red pepper and other spices. He sold them at the bazaar in the old part of the city, where he had two outlets.

He also engaged in illegal activities – melted Soviet silver coins and sold ingots. He often went out of the house to do his trading business and to visit his two other wives. Sometimes the excursions were very long. The leftover supply of edibles was exhausted. My mother and father’s second wife did not work and did not know either Russian or Uzbek. Occasionally we were visited by a few Dungan acquaintances and distant relatives, bringing life into the monotonous days of my father’s waiting. But most of all I was struck by the simple human attitude of our Uzbek neighbors. As a rule, five or seven days after my father’s departure (somehow it became known) one of the neighbors would drop in on us and ask whether everything was all right, whether we needed anything.

I was the interpreter. Thus, one by one, all the neighbors came to us. After my father’s absence for 10 to 15 days they would bring scones with them, even though it was harder for them than for us. Since then, the taste of Uzbek flatbread has stuck in my memory. Salty, unlike Dungan bread, it quickly satiated our stomachs without any snacks, and we liked it very much.

Although my mother was a person of strong character, the long absence (sometimes up to two months or more) of a man, relatives, and tribesmen, the lack of knowledge of languages, and the unfamiliar ethnic surroundings, broke her down and made her despondent. In such a situation, almost daily participatory visits from neighbors, sometimes with children, defused the atmosphere of abandonment, hopelessness, and brought a mood and a sense of closeness and comfort to the relationship with non-Dungan neighbors, comparable to that of relatives. At that time, we played Uzbek games, learned counting rhymes, poems and songs, the love for which I carried all my life. I feel the same feelings toward Uzbek culture and the Uzbek land which has become our second homeland.

Learning the language from childhood, knowledge of ethnic stereotypes of Uzbeks, including their tolerance in inter-ethnic communication, in many ways contributes to the formation of an adequate response from representatives of other ethnic groups.

In some cases, this accelerates the assimilation processes of a certain part of small peoples among the Uzbeks, in other cases, it has a positive impact on the general atmosphere of inter-ethnic relations. But in both cases, the tolerance of the Uzbek people accelerated and accelerates the process of acculturation to the Uzbek culture, the acquisition of a new homeland for millions of people on Uzbek soil.

I am sure that these very motives were an important factor in prompting my father to persuade his two brothers-in-law to leave their settled homes and move their families from the Jambul region of Kazakhstan to the present-day Dungan makhalla of the collective farm “Karasu” in the Urtachirchik district of Tashkent province. Now the descendants of my mother and her two sisters make up more than 280 people, or about 15% of the entire Dungan population of Uzbekistan.