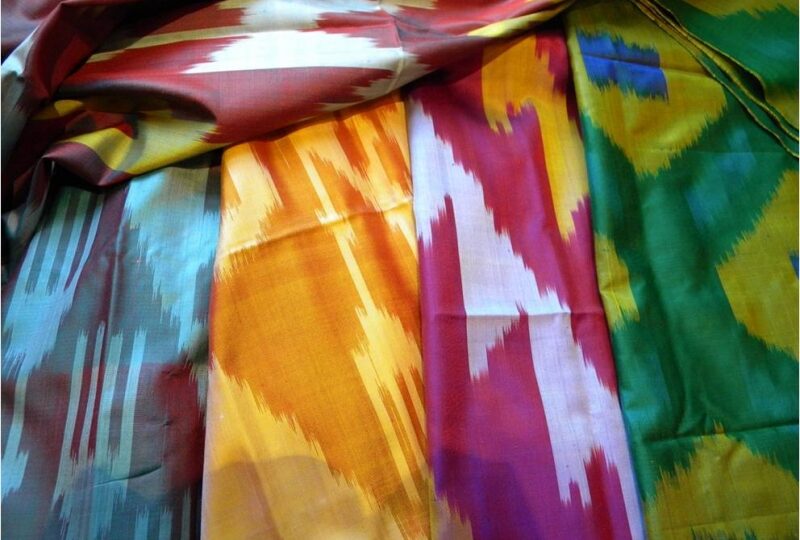 Ikat – The Miracle of the Eastern Masters (Textile 520 Samples)

Ikat is a miracle of Eastern masters, a technique of creating patterns on textiles, as a result of which the fabric “Ikat” turns out bright and individual. Ikat cannot be confused with any other type of fabric. The technique of its creation is that the thread before weaving, dyed and dried from one to several times, and then begins the process of weaving. And before the weaver uses the loom to create the final result, he does an incredible job of transferring the threads and creating a preliminary pattern on the warp threads by hand. Ikat has a characteristic only for him shift in the contours of the pattern or “blur”. This is because the craftsman weaves warp and weft yarns together and ties knots on the warp yarns, thereby creating a preliminary pattern.

The Ikat technique, a miracle of Eastern craftsmen, came to us from Indonesia. The Indonesian word “ikat” means to weave or tie. From Indonesia, Ikat spread to Japan, China, Malaysia, India, Central Asia, Tajikistan, Turkmenistan, Turkey, Guatemala and Mexico. Need to say, to Central Asia the technique of creating patterns on textile Ikat has got with the masters, who in the Middle Ages came here along the Silk Road and remained here. Such centers as Bukhara, and later Samarkand, Khiva and Kokand became world famous for the art of genuine Ikat weaving from both cotton and silk threads. The masters from Uzbekistan attained such perfection in this type of art that for some time Ikat was on a par with gold: it was presented as a gift to distinguished guests, used for prisoner exchange, and used to make peace between belligerents. Once presented to the Romanov family by the Bukhara emir, a collection of 520 Ikat textiles constituted the basis of the world collection of textiles.

Undoubtedly, Ikat is a miracle of Eastern masters, which for many centuries was and still is a genuine handicraft. Ikat textile, which spread along the Silk Road with the caravans of merchants, has come a long way. Even today, we can observe this creation of human hands. It should be noted that Ikat was undeservedly forgotten during Soviet times, but since the 1990s the revival of the Ikat technique has been more noticeable, both in the former Soviet Union and abroad. More and more well-known designers use Ikat in their collections today. Ikat design is also used for interior design.

So, do not miss the opportunity, when you come to Uzbekistan, to buy a copy of an exclusive textile product, made in the Ikat technique, in Bukhara or Samarkand, which will not only remind you about your trip to this sunny country, but also bring a bright note of personality to your closet or interior!