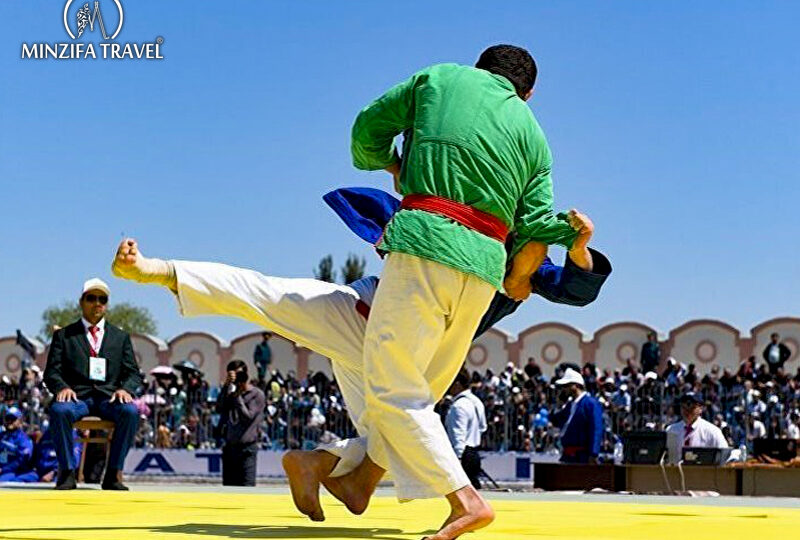 The kind of national belt wrestling, officially included in the world network of non-Olympic sports and supported by UNESCO, is Kurash. Kurash in translation means “to reach the goal by the fair way”. This type of martial art appeared on the territory of present Uzbekistan about three and a half thousand years ago.

Alpamysh, in his ancient legendary epos mentions Kurash as the most favorite and wide-spread type of martial art. Historian and philosopher Herodotus described kurash in details in his “History” among other customs and traditions of ancient Uzbekistan. Avicenna opined that kurash was useful for both body and mind; Tamerlane introduced kurash to the training and self-defense program for his invincible soldiers.

Kurash was not only martial art but also a public entertainment at feasts and celebrations. As years went by Kurash never lost its popularity and remained one of the most beloved and cherished traditions among the peoples of Uzbekistan.

The rules, techniques, traditions and philosophy of Kurash have been passed on from generation to generation for many centuries. But there were no attempts to systematize and generalize all information about kurash. Only in 1980 Komil Yusupov, master in judo, sambo and kurash began to make researches which in ten years came to creation of universal rules of kurash. By thoroughly studying thousands of years of tradition he determined the weight categories, terminology and gestures, the duration of the bout, the uniform for judges and wrestlers. Everything necessary was done to transform the ancient people’s entertainment into the modern sport.

The uniform for kurash wrestlers includes wide white pants and a spacious shirt. An obligatory part of the uniform is a cloth belt, used for the convenience of grasping an opponent.

The rules of Kurash:

You are allowed to fight only in a standing position, you can use only throws and hooks. The use of any kind of hitting, painful, choking techniques, as well as grappling below the belt is strictly prohibited. All actions are evaluated by judges. In case of equal assessments, the victory shall be awarded on the basis of the last action.
It is not allowed to go outside the mat, but if the hold started inside the zone and ended behind the line, it is evaluated.

grasping the pants of an opponent;
to use techniques that may injure the opponent;
to use painful and suffocating holds.
In ancient times, duels were held before major battles: fighters of opposing sides met in them. There were cases when, at the end of such fights, the commanders of the troops concluded a truce and cancelled the battle.

Kurash is the embodiment of centuries-old philosophy and values such as respect for the opponent and humanism, honesty and the ability to go all the way. This kind of martial arts is one of the youngest international sports and it is beginning to gain popularity all over the world. It regularly holds World, Russian and European Championships. In Tashkent, with the participation of representatives of 28 countries in Asia, Africa and Europe, in 1998 the International Kurash Wrestling Association was established which successfully functions to this day.