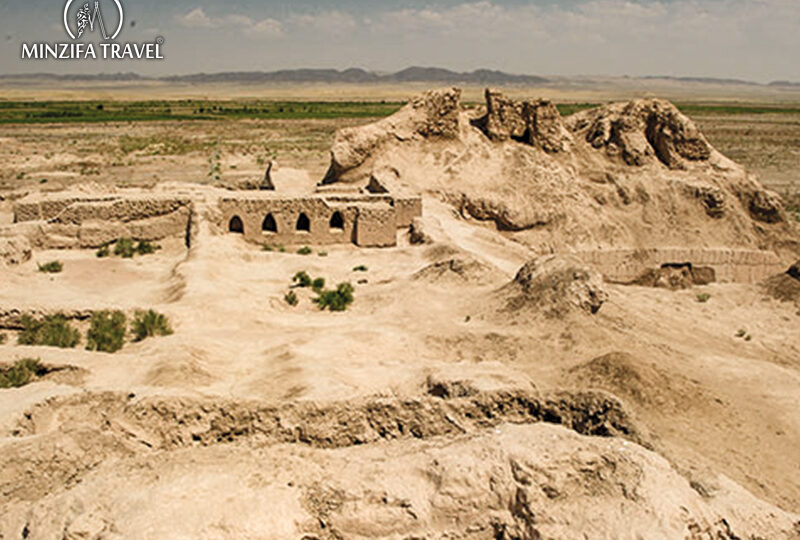 Many centuries ago, unknown architects erected impregnable fortresses on the territory of Khorezm. To this day, these grandiose structures never cease to amaze scientists and travelers alike. Now let’s speak about the mysteries of the grandiose structures of Kyzylkum Desert (Lost Khorezm).

The Kyzylkum desert surrounding the oasis of Khorezm is a strange desert. Traces of human activity are found everywhere among the dunes, on the tops of desert rocks in the spurs of Sultanuizdag. The remains of ancient channels dotted for tens of kilometers, the ruins of large settlements and cities. Today this world is dead. Crows, lizards and snakes took over the majestic constructions of ancient Khorezm. It seems that you are in an enchanted kingdom, a country of materialized mirages…

The territory of ancient Khorezm is often referred to as “Central Asian Egypt”. It should be said that it is a very appropriate comparison. There are not many places in the world where so many monuments of the ancient architecture are concentrated on a relatively small territory. Just one fortress numbers more than a dozen. And just like the Egyptian pyramids, they stun a man first appearing in their immediate vicinity. An onlooker or traveler immediately has a lot of questions: how could ancient builders, in the absence of any construction machinery, have erected all these grand structures? Why have many of the buildings survived to this day? And the age of most of them is two thousand years. Specialists from the Institute of History, Archaeology and Ethnography of the Karakalpak Branch of the Uzbek Academy of Sciences helped us answer these questions. Archeologists Gairatdin Khojaniyazov and Nariman Yusupov have spent many decades studying defensive constructions of ancient Khorezm and consider that there are many more mysteries in the history of this once mighty state. According to them, in the early 2000s, Khorezm experienced an unprecedented boom in construction, the Itogi newspaper reports.

The principle of construction of all Khorezm fortresses had been the same for centuries. Says candidate of historical sciences Gairatdin Khojaniyazov:

The ancient builders had really fast pace. Two or three months and the fortress was ready. Architects clearly knew their business and were well aware of the quality of the building material. Either nature provided masters with excellent raw materials or they had some now forgotten secrets of making high-strength raw blocks and bricks. However, the fortress walls built of these blocks and bricks stood the test of time, wind and rain attacks, the 50-degree heat, attacks of the Arab warlord Kuteiba who captured Khorezm in 712, and then the invasion of the Mongol hordes. Many ancient fortresses look as if they were abandoned by their inhabitants only yesterday. And what is surprising is that, despite their majesty and good state of preservation, today only a narrow circle of specialists know about the existence of these fortresses. Maybe because they are so well preserved, they are located off the beaten path, and to get to them without the help of local historians is very, very difficult.

The choice of location for building the fortresses is still one of the historical and geographical mysteries of ancient Central Asia. What theories have not been put forward about it! It is considered that people have always wanted to live close to water. But in the places where fortresses were located, water was hard to reach. At the same time, there are no major defensive structures near the Amu Darya. Perhaps, this can be explained by the fact that the ancient inhabitants of Khorezm sought to build fortresses on the natural hills, while they almost never occurred along the banks of the Amu Darya. The Khorezm people solved the problem of water supply with the help of many kilometers of irrigation canals. The exact length of these structures is unknown. However, the scale of the ancient construction can only be compared with the shock socialist construction works such as the Belomorkanal. Probably, thousands of people were involved in digging the canals in the desert to work day and night.

In addition, for the construction of fortresses, it was necessary to deliver the building material, river sand and clay, necessary for the production of raw bricks, to the places of construction. It is still unclear how the ancient foremen managed to establish the supply, but the fact remains that the river sand and clay uninterruptedly came dozens of kilometers away. One can imagine these caravans stretching across the desert!

The results of the Khorezm people’s work are stunning. Take, for example, the grandiose Toprak-Kala complex (Earth City), the walls of which stretch for more than a kilometer. It was a whole city in which historians have counted at least ten quarters. The construction of the city began in the 1st century AD. As it was built on the plain, it had to be surrounded by a high wall for protection against attacks. And it was built. Up to ten meters high! Imagine the scale of the construction: hundreds of people took part in the earth-moving works, while the castle was being built at the highest place.

Another no less majestic fortress Kyzyl-Kala (Red City) protected the borders of the state in the I-XII centuries. Despite its relatively small size (65 by 65 meters), it was a tough nut to crack. Its double walls were eight meters thick and rose to a height of 15 meters. The interior of the fortress had two stories, and the first floor had a 4-meter plinth so that ramming guns could not open the interior of the fortress to attackers.

The place for the construction of the fortress was chosen very carefully. As we have already noted, the preference was given to the hills, but there was also such a tradition. Somewhere near the proposed construction site they caught and killed a wild animal, and if the ancient physicians found signs of some disease, the construction did not begin, rightly believing that the same ailment can comprehend and people who have settled there.

Perhaps the most suitable place was chosen for the construction of the fortress Ayaz-Kala (the City in the Wind). It is difficult to overcome a steep ascent to a natural hill with a fortress on its top, even on a lighter person.

Once inside it, the attackers were trapped and fiercely repulsed.

Historians assume that Ayaz-Kala fortress was erected in the IV-III centuries B.C., but, strange as it may seem, it has never been used for its direct purpose. The fortress was built in the 4th and 3rd centuries BC, but strangely enough it was never used for its intended purpose. Archaeologists have not found here any evidence of human habitation, but found a lot of prefabricated, but unused building material. And yet this fortress, which had stood for centuries, seems to have been abandoned only recently. Its stark grayish-pink adobe walls with narrow slits of arrow-shaped loopholes, menacing towers, round and lancet arches of portals still look daunting.

The grandiose ruins are steeped in numerous legends and tales. Even today, popular belief has it that many castles hide underground passages guarded by evil forces, and that anyone who tries to seek immeasurable treasures here must perish. Fortunately, not a single tragic death has been recorded among archeologists in all the years of research. As for the “incalculable treasures,” scientists do not deny the possibility of future sensational discoveries. The fact is that of the numerous structures of ancient Khorezm at best half has been studied so far. For example, Kyzyl-Kala fortress is completely untouched.

It is strange, but historians still know very little about ancient Khorezm. The annals of the dead cities of this state are replete with undeciphered pages, which will certainly be read sooner or later. There is an example: it is difficult to believe that in the early XIX century, science knew little about the ancient history of Egypt, Babylon and Assyria, and now we know about the past of these powerful empires quite a lot. Perhaps, the history of ancient Khorezm will eventually reveal its secrets.