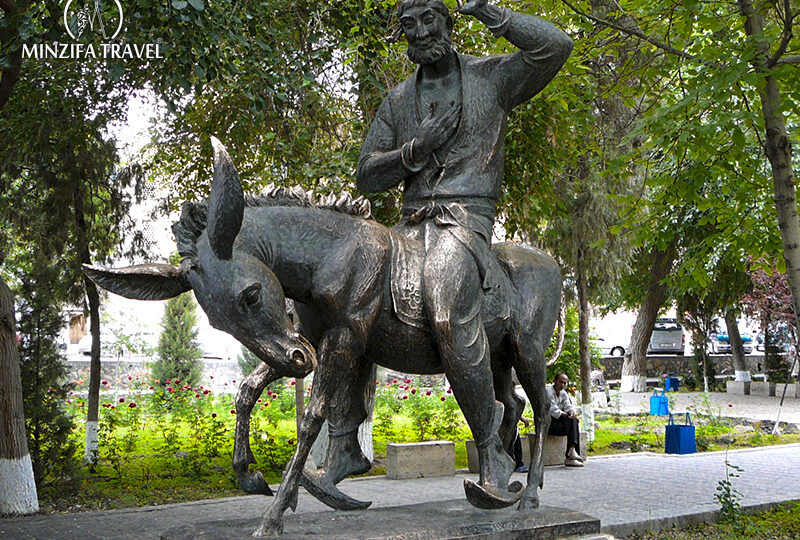 Khoja Nasreddin Afandi – Eastern joker and trickster – was he or wasn’t he?

Do you know who Nasreddin Afandi is – an oriental joker and trickster, an eternal vagabond, a subtle thinker, a rebel and a fool? This character of jokes, legends and myths is known throughout Central Asia and the Middle East, China, Transcaucasia and the Balkans. Unfortunately, there isn’t any factual evidence of the real existence of Nasreddin Afandi, but the rumors about him are still spreading around the world.

So, Nasreddin Afandi – oriental joker and cunning, in the literature of Muslim countries is known as a character, whose image combines both subtle sage and stupid simpleton. The main characteristic inherent in him alone is that he will find a way out of any situation in his favor by means of a sharp word.

In addition to his image can be attributed a constant donkey, on which he travels around the world and is his companion in all his adventures.

Nasreddin Afandi, the eastern joker and trickster, whose parables began to form in the XIII century, since his childhood, if we believe the stories about him, demonstrated his talent for witticism. Here is, for example, one parable about him: “Being in the elementary school, Nasreddin constantly pestered his teacher, Domullo, with all kinds of questions, many of which the teacher simply did not know how to answer. As a result, Domullo lost his temper and said to his student – Do not boast about your knowledge. Children who want to seem very smart in childhood, often grow up to be just fools. – Nasreddin responded – Probably, you, dear teacher, were very smart in your childhood!

Many nationalities believe that Nasreddin Afandi – the eastern joker and cunning, was a native of their country. Not without reason there are monuments to this legendary character in many eastern cities. In Turkey, Kazakhstan, Uzbekistan, Russia and Ukraine.

By the way, the monument to Nasreddin Afandi in Bukhara (Uzbekistan) is steeped in a certain tradition. They say that if you rub the ear, mane or knee of the donkey on which Nasreddin sits, good luck will happen to you. In general, Nasreddin Afandi in Bukhara is a hero of life, to whom nothing matters, from any situation he will extract if not a benefit, then a lesson for himself and certainly share it with others. Here is an example of his wisdom and wit: “One sunny, warm morning Nasreddin Afandi was walking home on a dusty country road, and very close there was a small grove of greenery. – I’ll go under the shade of trees and enjoy the greenery and cool breeze on such a beautiful morning – he thought and turned to the grove. No sooner had he walked a few steps among the trees than he fell into a hole. – Good thing I went through the grove! If in the middle of this beautiful shady road such an accident happened to me, who knows what could have happened on a dusty country road!”

Nasreddin Afandi, the Oriental joker and trickster, was not chosen for nothing as the hero of all kinds of stories and anecdotes. Despite all the silliness and awkwardness of his behavior and the inconceivability of his adventures, every story or anecdote about him is a “casket. It is filled with precious life wisdom, knowledge of who one is and what each person’s path and destination is, and the fact that one must find self-knowledge and the spiritual fullness of one’s being.

And finally, in order to keep our reader’s spirits high not only today, but always, a little anecdote: “It was a warm evening. Nasreddin was sitting at home and thought it would be nice to have dinner. But the problem was there was nothing to make dinner out of. But then he heard a knock at the gate. A distant relative of Nasreddin, who had come from a long way and brought a duck as a present for his master, stood on the doorstep. Afandi, delighted, cooked dinner with it and ate it together with his guest. In the morning, the relative left and then Nasreddin began to be visited by other relatives, their friends and friends of their friends, but to the disappointment of the host, none of them brought him any more gifts. In the end, Nasreddin was so tired of such guests that he did not want to receive anyone at all. But just at that moment there was another knock at the door, and another stranger appeared in Nasreddin Afandi’s yard and introduced himself – I am a friend of a friend of a friend of your relative, who came to you recently with a duck. – And he hurried into the room and sat down at the table, where he comfortably seated himself and waited for the appearance of dinner on the table. Nasreddin Afandi left and returned already with a plate, which he placed before his new guest. – What is it? – The stranger asked, looking into the plate and seeing there a simple boiling water. – It is a soup of that very duck soup, which was brought by my relative, a friend of your friend’s friend – Nasreddin answered meaningfully”.