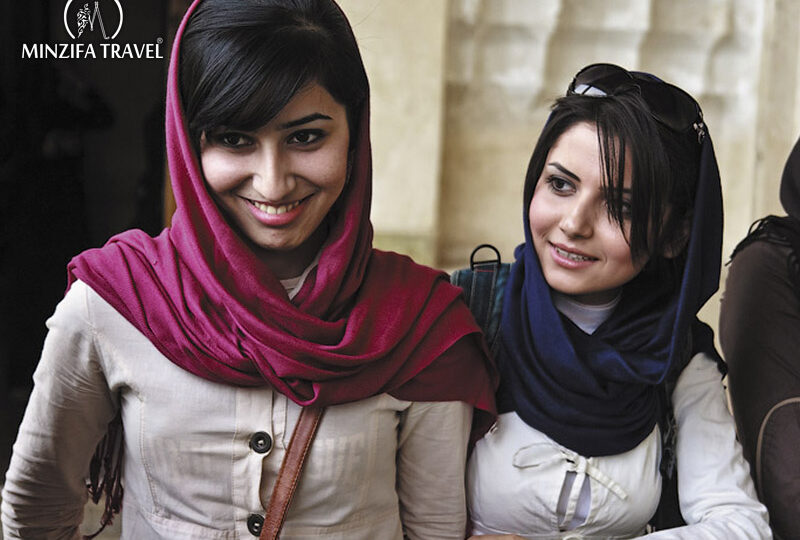 Farsi, self-appellation – Irani. A people in Iran. The language is Persian (Farsi) of the Western Iranian subgroup of the Iranian group of the Indo-European family. Believers are Shia Muslims, to a lesser extent Baha’i.

Iranians are one of the oldest groups of inhabitants of the Middle East, the nucleus of which was the Farsi region (hence their second name, Persians). The Iranian-Persian language developed on the Aramaic basis, which became the linguistic base of many peoples of the East.

According to the monuments of ancient culture, the relations of the peoples of Iran with Central Asia go back more than four millennia. However, the first concrete information about their penetration into the territory of modern Uzbekistan dates back to the time of the Achaemenid state, the invasion of Cyrus II in 553 B.C.

They also settled here after the campaigns of Alexander the Great, and during the Sassanid Empire, when wide trade connections developed along the Great Silk Road, dominated by Sogdian and Iranian merchants. Colonies of merchants and craftsmen grew up in Samarkand, Bukhara and other cities of the Central Asian Mesopotamia.

During the Arab conquest, the army of Kuteiba ibn Muslim included many Iranians, who remained in the cities of Central Asia after the collapse of the Sassanid Empire.

They came here in large numbers for trade, scientific and industrial purposes under the Samanids and Karakhanids. It is known from sources that the Chopardira and Ganilifar quarters in Samarqand were places of assembly and life of scientists of the East. The young philosopher and poet Omar Khayyam settled in Samarkand’s Gotfar quarter, the largest cultural center of the time, in the 70s of the 11th century. He soon moved to Bukhara at the invitation of the ruler. Later, at the request of Sultan Malik-Shah, he settled in Isfahan.

After the military campaigns Amir Temur brought craftsmen, scientists, poets and artists, singers, musicians, etc. to his possessions. In honor of each successful military campaign he erected monumental constructions, using the work of captured architects for this purpose. This is evidenced by the inscriptions on the monuments themselves: the architect Muhahmud from Isfahan created a complex of madrassah and khanaka of Prince Muhammad-Sultan in Samarkand, and carver Yusuf from Shiraz – a carved door at the entrance to Shah-i-Zinda. Two Iranian miniature painters, Shikhabuddin Abdulla and Zakhafetdin Ozhar, created in Samarqand in the mid-15th century.

Sources testify that Iranians settled on the territory of Maverannahr both under Sheibanids and Ashtarkhanids.

Iranians also came to Central Asia under Shah Abbas, Muzaffar Eddin. In 1740, Bukhara and Khiva khanates were included in the state of Nadir Shah. With his troops a large number of Ottoman Turks, Iranians and Afghans came to Bukhara and settled there. Some Iranians were brought as prisoners from the wars that took place between the rulers of Central Asia and Khorasan. But the bulk of them were forcibly relocated from Merv to Bukhara and Samarkand. Later they also settled in Jizzak, Kermin, Karshi, Shakhrisabz, Termez, and in small numbers in Khiva. As early as 1920, 809 Iranians – descendants of those brought here by Turkmens and converted into slaves – were registered in Khiva.

There was some rapprochement with the local population, but there was no complete merger due to differences in religious currents. Although the coexistence was peaceful on the whole, religious excesses occurred at times, in particular the Sunni-Shiite massacres in 1910. The socio-economic and professional factor also contributed to the preservation of separateness. Iranians, especially those who lived in the Bukhara Khanate, occupied leading positions in the emir’s court, in the Bukhara army, and in silk production. The combination of confessional and socio-economic factors contributed to the isolation of Iranians.

In 1874, when slavery was abolished, many Iranians returned to their homeland, but a large part of them remained to live here, in particular in the Amu Darya department.

Well acquainted with the specifics of agricultural labor under local conditions, Iranians were engaged in farming, grain growing, horticulture, viticulture, but a more important place in their life was given to trade and crafts. They specialized in making sweets and selling spices and medicines, carpet weaving and jewelry. Among the artisans were Zargari (goldsmiths), Misgar (coppersmiths), Kalinduzi (carpet weavers), etc. However, still prevailed silk weaving – expensive types of silk fabrics – shokhi, adras, which were used to make rumoli shoy (silk scarves) and zhoipush (bedspreads).

In the mid-1970s, Central Asia was conquered by Russia, which used to be the richest source of raw materials and a convenient market for its developing industry. Economic ties between these countries became permanent. The turnover of Iranian merchants helped to strengthen them. The most famous among them are: Hodji Hoshim Rakhimov, Hodji Faizi Sharipov, Hodji Mumin, Hodji Mullo Barot, Hodji Latif zargar, Hodji Gafur, Hodji Kholik, Hodji Abdurayim, Hodji Alikhon Mamadkhonov, Hodji Zarif, Mashadi Kozim, etc. They traveled to Russian cities, made successful trade deals and sold goods themselves. In 1880, Muhammad Kozim of Mingtut and Ogo Mir Hasan of Sayit-Mahalli demonstrated their fabrics at the St. Petersburg exhibition, which were awarded a gold medal.

There were sporadic resettlements to Bukhara of Persian merchants and artisans from various parts of Iran until 1917. Iranians crossed the border without documents and were able to live here without passports. Russian merchants and businessmen did not see them as dangerous competitors, and the regional administration even facilitated their arrival in Turkestan, seeing in them a cheap labor force. Such late settlers were called “mashadi” (Meshkhedtsy) or “Persiyon” (Persian) by the Bukhara people. The Iranians gradually assimilated with the local inhabitants.

The Iranian intellectuals who were in opposition to the Shah’s regime also settled here. Among them was the later prominent poet and novelist Abulkasym Lahuti and others. Children of the wealthiest Iranian natives were educated in local Muslim, Russian-Turkish and New-Methodist schools. As an exception, they attended Russian elementary schools and gymnasiums.

After 1917, the passport regime in Turkestan became stricter. Some Iranians, mostly low-skilled and illiterate workers, accepted the citizenship of Soviet Russia.

At this time, the government’s general policy toward ethnic minorities changed, which was also reflected in the situation of the small peoples of Central Asia. They were artificially involved in industrial production and the development of education. In the early 20s, the Council for Enlightenment of National Minorities created the Iranian-Azerbaijani Bureau which ran two pre-school institutions, three workers’ houses, two libraries, and pedagogical courses. An Iranian district was opened in Samarkand, and an Iranian theater (Samarkand) was functioning. The Iranian language schools were functioning.

In the early thirties the first professional Iranian workers appeared in the factories of Tashkent. However, later on they remained isolated. Only 5% of the Iranian population were employees. At this time in Tashkent there were 200 handicraft workers of Iranian origin. In addition, in 1929 two collective farms were established from local Iranians, whose crop yields were always consistently high.

Despite all the above successes, as evidenced by the resolution of the Uzbek government of 27 December, 1933, although the Iranians were equated with the main indigenous ethnic groups, they were not always able to exercise their rights, such as the right to be taught in their native language and to equal treatment in the courts, etc.

According to the all-Union census of 1970, there were 15,457 Iranians living in Uzbekistan, “of whom 12,202 considered their native language to be Uzbek”.

This data clearly shows the direction of development of the ethnographic group of Iranians. The term “irani” has become a common ethnonym for a group that has developed over the last three to four centuries from voluntary or forced migrants from territories subject to Iranian rule in various periods. In some cases the term “ironi” referred to those who came from Iran relatively recently (1924-1938). Old-timers in such cases, by way of contrast, are called “Farsi” or “Moori. People of middle and especially younger age, for whom religious affiliation does not have any significant importance, officially call themselves Tajiks or Uzbeks in Bukhara. The Turkic-speaking Iranians (Samarkand) refer to themselves as Uzbeks. The process of assimilation among the local population has been going on for many centuries. It is the result of a long life together, close contact in the socio-economic and cultural spheres.

The visible result of this was the Dargom canal in Samarkand, which remained in history under the name of “Eron Arigi” (“Iranian canal”). Iranian mahallas were formed along it: Panjob, Khuja-Sahat, Lolazor, Khamar, Mingtut, Sayit-mahalla, Bogishamol, Kullar Bogi, Naiman, Khuzhanazar, Bekmahalla, etc. The names of some of them are associated with the canal. In the mahalla of Panjob (Pers. – five waters), this canal is divided into several branches, hence the name of the mahalla. There are mahallas of Yungichka-aryk and Dam-aryk. Gardens appeared around these mahallas, and wind and water mills were built. A large group of artisans, peasants and merchants lived in the Tashkent oasis, which is reflected in the names of mahallas in Tashkent and the bazaar in Yangiyul. One may note the complex built in Samarqand in 19th century that included the mosque with minaret that has not survived till our days and the surviving madrasah building designed by architect Khoja Abduraim.

The madrasah was used for religious and secular studies. The building was used for its intended purpose till 1924, and then was transferred to various organizations. It was only in 1990 that the madrasah was returned to the believers. In the same complex there was a civil structure – the Khammomi Davuti Panjob oriental bathhouse. It was built by a local merchant Khoja Abduraim after his pilgrimage to Iranian cities; he brought the construction drawing and the plan from Mashhad. The complex was decorated with traditional teahouse and khauz.

Cult constructions of Iranians are also known in Bukhara.