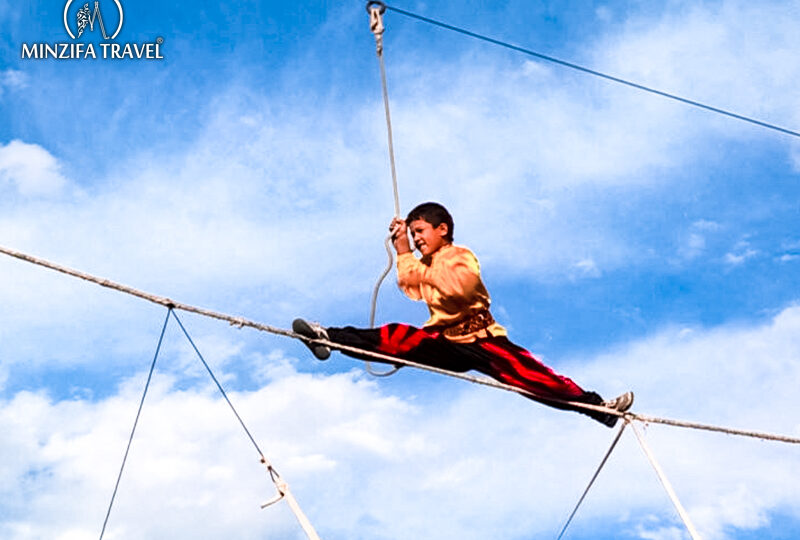 Among the various traditions of the peoples of Central Asia we can single out into a separate category the traditional entertainment during the festivities. These are, of course, dances, songs, but also include puppet shows, wrestling, races and performances of rope-walkers – darbozes, as they are called in the East.

On the territory of Uzbekistan, this type of circus performance was widespread in the early Middle Ages. The performances of rope-walkers have always attracted huge masses of people. Earlier they used to be held in the bazaars or large squares. Not a single holiday passed without a performance of darboz. The entire population, from small to large, gathered for them, often attended by the rulers of the city.

This national tradition has survived to this day due to the fact that it has been passed down from generation to generation. And today’s ropewalkers are great successors of the glorious traditions of their ancestors.

The rope-walkers’ craft is very hard, requiring great endurance, dexterity and strength. The rope-walkers are darbosa, mostly men. They are usually dressed in national traditional costumes, either brightly colored or in a white shirt and black trousers, which are tucked into soft leather boots. Darboz do not use insurance, and the height of the ropes ranges from 4-5 m to 50 m. This height requires enormous concentration and attention as well as dexterity.

During the performance, the darboz climbs the rope and starts his performance. During the rope walk, the darboz holds a pole for balance. The unsurpassed masters are those who can keep their balance on the rope while standing on one foot. When darboz reaches the other side of the rope, he repeats all his tricks anew, but backwards, which is also an indication of the skill of the ropewalker.

Today one can see rope-walkers’ performances during such holidays as Nowruz and Independence Day of Uzbekistan, during national festivals, and also their performances are held in Tashkent Circus.