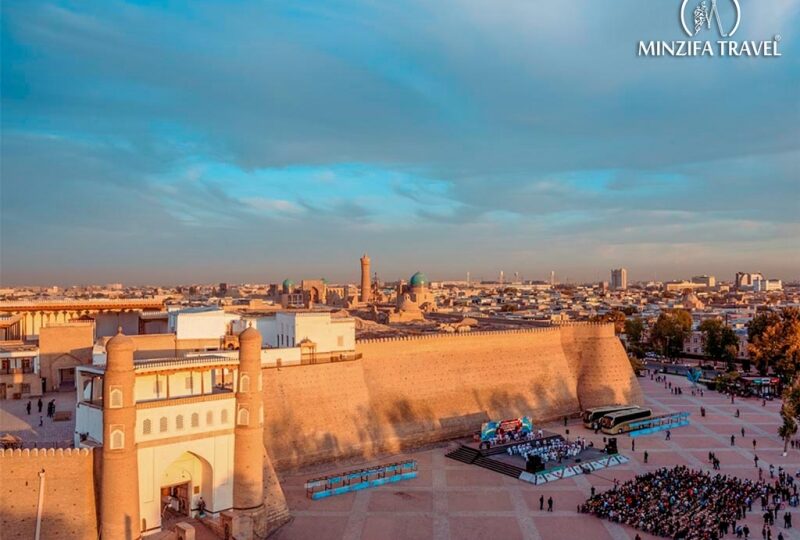 Going on a trip is always a good idea. And especially when a trip to Uzbekistan is planned. Our tour operator invites you on a spring tour through the sunny country, during which we will visit the ancient city of Bukhara. This amazing pearl of Central Asia is ready to tell us a lot and more, so get ready for bright emotions and unforgettable impressions. During a trip to Bukhara we will have time to visit local men’s and women’s baths, visit a folklore show in Madrasah Nodir Divan Begi, take part in master-classes on cooking pilaf, making dolls, etc. And, of course, we will see all the important sights.

An amazing structure, erected at the end of the 10th century. The mausoleum was built on the site of an ancient cemetery in Kirov Park. The building is famous for being the oldest monument of Central Asian Islamic architecture. The building combines almost all the traditions of Zoroastrian temples of fire. This is especially noticeable if you consider the elements of decoration, which laid the foundations of the Central Asian architectural style.

The ancient building of Poi-Kolon Square and a part of the complex of the same name, Kalon Mosque was once the largest in the Bukhara Khanate. It is equal in size to Bibi Khanim Mosque, which is located in another pearl of Uzbekistan – Samarkand.

A functioning Bukhara mosque, the name of which translates as “Children’s pond”. Until the 20th century Bolo House complex was one of the sources of water, but after it was drained. The mosque itself strikes not only with its beauty but also with its grandeur. The building has a luxurious appearance, it is decorated with 20 columns that hold the ceiling. The structure is more than 3 centuries old, and yet it continues to function – believers come here every day to pray.

The Ark Citadel fortress of Emir of Bukhara

An ancient symbol located in the center of Bukhara. The large fortress has always been a support for the rulers of the city. The history of the Arch is surrounded by mysteries. It is known that the fortress was built by thousands of slaves, who created the hill by hand. For many centuries, it was the residence of emirs. Scientists, philosophers and poets also lived here.

The main architectural symbol of the city is the minaret, erected in the 12th century. It is a majestic tower, which rises up to 47 meters. The building has twelve ornamental circles, each depicting a unique pattern. Three belts have been preserved on which are indicated: the date of construction – 1127, the name of the builder – usto Barno and the name of the donor – the ruler Arslankhan.

Miri-Arab is the second largest madrassah in Bukhara. In first position is Madrasah Kukeldash. The educational institution has more than 100 cells according to the number of surahs in the Koran. For many years it was the only madrasah recognized by the authorities as a training center for Muslim religious leaders.

The madrasahs are located on a single axis. The Madrasah of Abdulaziz Khan is considerably superior to its neighbor in wealth and scale. The structure played an important role in the formation of Central Asian architecture and has brought to this day the skill and power of the masters of the time. The walls preserve the poems of the great poets, while Ulugbek’s madrasah is covered with the Koran’s maxims. Don’t hurry to exhale as we are going to walk around the ancient trading domes which amaze not only with their architectural aspect but also with a variety of goods made by local craftsmen. The whole complex of Labi House with its famous madrassahs and other sights awaits us. Prepare your suitcases and your best outfits – this tour to Uzbekistan in spring is ready to completely turn your idea of Eastern culture and architecture in general.