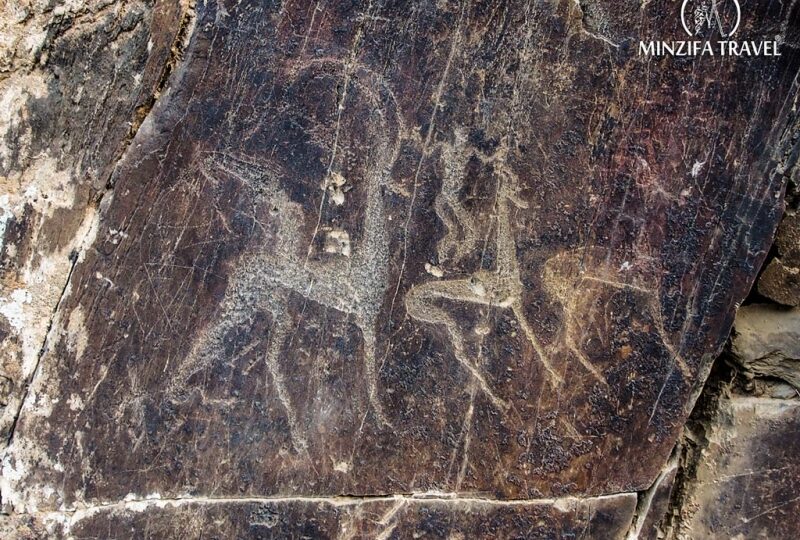 Rock art of our ancestors in the Sarmyshsai tract

The Sarmyshsai Gorge is an open-air exhibition of petroglyphs of Uzbekistan, because this is where the drawings carved on the rocks or on the surface of the rocks by our ancestors were found in Uzbekistan. The Sarmysh canyon (or as it is called in Uzbekistan – Sarmyshsai) is situated on the southern slopes of Karatau mountain range, which in its turn is the northernmost spur of Tien-Shan mountains. Situated on the border where Kyzyl Kum desert begins, in about 40 km from Navoi young industrial city of Navoi province, Sarmyshsay is the attractive place not only for citizens of Uzbekistan, but also for tourists, wishing to touch personally the traces of our ancestors.

And really Sarmyshsay is an open-air exhibition of petroglyphs of Uzbekistan. Here scientists counted about 5000 rock drawings, which are located on the rocks of the tract Sarmishsai in a length of 2 – 2.5 km. The drawings date from the end of the Stone Age to the Bronze Age. And this is no less than 5000 years BC. Presumably during these periods the territory of modern Uzbekistan was inhabited by Indo-Iranian nomadic tribes, which the Greeks and the Persians called the Scythians. The drawings are executed mainly on the mirror-like surface of reddish sandstone with limestone and slate interlayers.

Sarmyshsai is the exhibition of open-air petroglyphs of Uzbekistan, which fully reflects not only the flora and fauna of this region many millennia ago. It is also the first attempts of primitive people to depict man and his activities. In Sarmyshsai you can find drawings of hunting, domestic activities and leisure time, scenes of predators chasing their victims, etc. Surprisingly, drawings dating from later periods acquire more details and become more accurate in their technique. Here we can trace the development of craft production of our ancestors, as more tools and weapons appear in the drawings over time. And you can also see the animals that inhabited this region in those days. Many of them disappeared from these places with climate change and the advent of civilization.

It turns out that Sarmyshsai is an open-air exhibition of petroglyphs of Uzbekistan, the exhibits of which have been replenished for more than a millennium. Today scientists take all possible measures for the maximum preservation of this cultural heritage. Uzbekistan has about 150 sites where ancient petroglyphs were found, but the Sarmishsai tract remains the largest of them. It is really a place worth visiting.

Photo of the Sarmyshsai tract