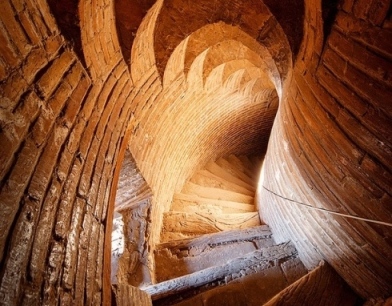 The symbol of the city of Bukhara – “Great” Minaret Kalon (or Kalyan, as they call it here in Bukhara), towers over the old city for decades. It is difficult to imagine what this well-known monument of the ancient architecture has “seen” in its lifetime. It served as a beacon for passing caravans, pedestrians, merchants and knaves, and a watchtower. It had seen shells and earthquakes, but held on despite everything.

Today it is known for certain that the minaret of Kalyan was built in 1127 at the same time as the cathedral mosque. The first mosque was destroyed and on this place was erected another building which has reached up to now – Mosque Kalon. The mosque and the minaret of Kalyan are “linked” by a single narrow bridge that allows access from the mosque to the minaret and back. The Kalyan Minaret was built using the then-new technique of sturdy burnt bricks. The tapered minaret is topped by a rotundra lantern with 16 arched windows.

When you come close to the minaret, you can see that it is decorated throughout its height with 12 belts, on the surface of which you can discern unique patterns made of the same brick. On one of the belts historians have discovered inscriptions, deciphering which gave information about the date of construction of the minaret – 1127, the master – usto Bako, and the donor (in present – the investor) – Arslan Khan – the Governor of Bukhara.

Minaret Kalyan (as all minarets) was intended to perform “azan”, i.e. to call the Muslims to prayer. By the inner spiral staircase in 105 steps to the top of the minaret at a height of 45, 6 meters daily muezzins climbed to convoke the faithful to prayer.

But few people know that the minaret of Kalyan served also as a place of public execution for the criminals sentenced to death during the Bukhara Khanate (from 1785 to 1920). Since that time the minaret was nicknamed among the people – the Tower of Death. The condemned were thrown from the top right to the square in front of the minaret. The last mention of such punishment was in 1884.

But it is said that the Minaret of Kalyan served as a public place of execution not only for criminals, but also for unfaithful wives. One legend says that it stopped when one of the condemned put on about 40 dresses and was left alive after being struck on the ground.

But whatever legends may circulate about Minaret Kalyan – it will forever remain in the hearts and minds of those who have seen it once. Unbreakable, graceful, the Minaret of Kalyan rises above the holy city of Bukhara for almost 900 years. We hope that in the future it will be a beacon for travelers, travelers and residents of the city for all time!