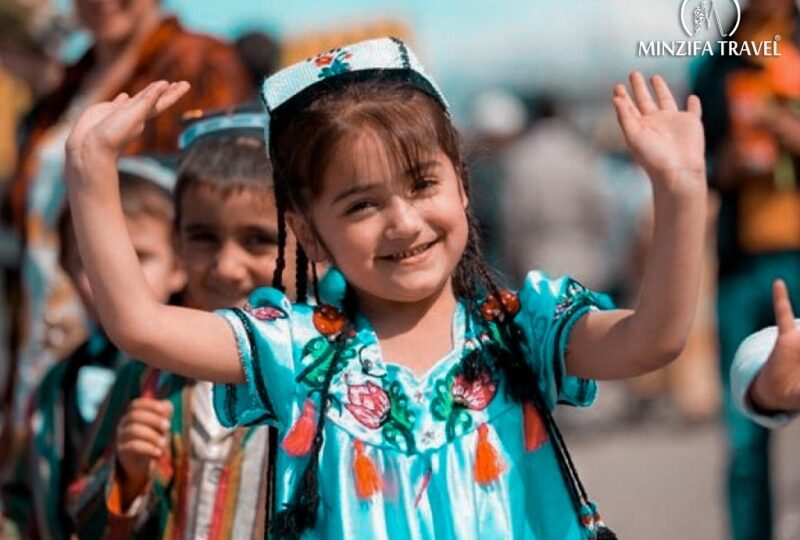 In Uzbekistan, the New Year comes twice. In addition to the traditionally European, they also celebrate the spring national holiday, which symbolizes the arrival of spring. The traditions and customs of the celebration are different and have their own interesting features.

Unlike the European New Year, which is celebrated on the night of December 31 to January 1, the Spring Festival falls on March 21 and is celebrated in a family circle during the day. All of the following 13 days are considered holidays, in which it is customary to go visiting, doing useful things and field work.

Although the traditional Uzbek New Year begins on January 1, but its traditions are different from what we are used to:

The main dish is not Olivier, but watermelon.
Chime of the chimes is accompanied by the eating of grapes and making wishes.
People smash old and cracked dishes.
Santa Claus and the Snow Maiden are called Korbobo and Korkiz, they appear on a donkey, which drags the cart with gifts.
As for the astronomical and “spring” New Year, the celebration is fundamentally different from the European.

How to celebrate the Asian New Year – Nowruz in Uzbekistan

The holiday is associated with magic, coming to Uzbekistan from the ancient Iranian worship of the Sun. Nowruz symbolizes the coming of a new day, so it is celebrated from the morning. Uzbeks believe that the first guest who comes on the day of the holiday brings karma to the house.

If a good and merry guest crosses the threshold, then the hosts have nothing to worry about – the year will pass productively.
It is better not to open the door for a spiteful man, but according to the customs of the country one shouldn’t do that, so everyone hopes that on Nowruz they will receive a “good man”.
Porridge, which is cooked “in the world. Even Olivier is not prepared in the same way as the traditional dish of Nowruz – sumalak. Porridge made of wheat grains with flour and spices is cooked in a large cauldron. New Year’s Eve dish symbolizes the warmth of the home and the infinity of life. It is prepared accompanied by ditties and fairy tales from the female sex on New Year’s Eve.

Interesting features of the spring holiday

The traditional European New Year, celebrated in winter, is a time of rest and eating goodies. On the day of the vernal equinox, despite the fact that the holiday lasts for 13 days, the first day is reserved for rest and celebration. On the following days in addition to the fun people necessarily work – plant fruit trees. It is believed that the magical holiday time is sure to bring good luck in the future.

The holiday is associated with new expectations and hopes, so it is customary to forgive enemies, not to quarrel and help people in need. The Uzbeks believe that such actions will attract good luck to the house.

Another good omen is treating guests. Housewives make pirozhki, nishalda, flaky samsa. On holidays, the tables should be full of goodies, because abundance is another good omen.

The only similarity between the “spring” New Year and the winter is that it is quite difficult to sit at home. On Novruz in the villages held folk festivals, organized competitions, equestrian tournaments and fairs, where you can buy a lot of souvenirs and goodies from local chefs.

Would you like to be in a New Year’s atmosphere? Do you wonder what it is like to celebrate the New Year when there is no snow around, and the sun is shining and warm outside? Then book tickets for the spring tour to Uzbekistan, which will last for 11 days. During this time you will not only taste the delicious national cuisine, see the sights, but also get to know the culture of all the peoples who lived in the country in different years.