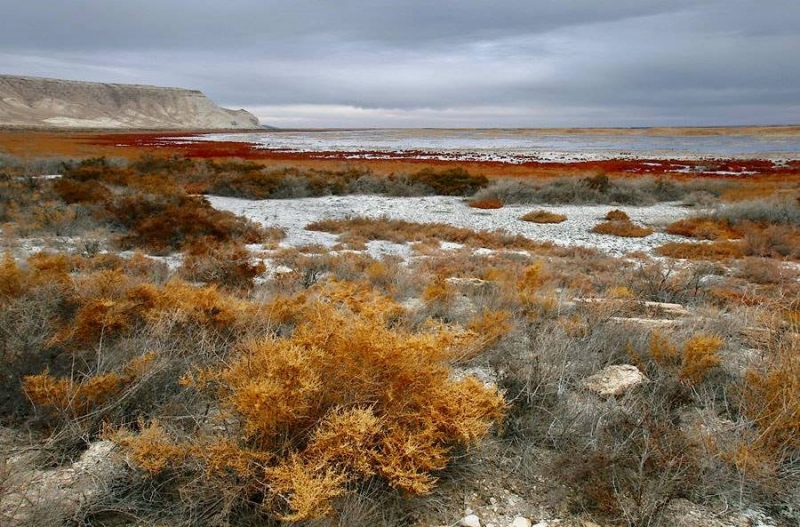 The Aral Sea and its Vanishing Beauty

The Aral Sea is the shameful disappearance of an entire lake, the 4th largest in the world, before it began to be drained by man. The only drainless salt lake in the Central Asian region disappears without a trace, leaving behind a desert covered with salt that spreads over a radius of 500 km. Hundreds of kilometers of devastated land, the lack of vegetation, not to mention crops, the decline of development of the entire Aral Sea region, and in addition to all unfavorable environmental conditions for human health – this is just a few points in a long list of consequences of drying up of the Aral Sea.

The Aral Sea is located on the border of two countries – Uzbekistan and Kazakhstan. The total surface area of the Aral Sea in the 1950s was 68 thousand km², depth – 68 m. Decrease in water level in the sea began to be recorded in the 1960s, when the Soviet government doubled the flow of water from the Amu Darya and Syr Darya rivers flowing into the Aral, for irrigation of agricultural land in the country, namely cotton. By the 20th century, the incessant flow of water, most often irrational, led to the rivers ceasing to replenish the water level of the Aral Sea, and the sea began to dry up at a catastrophic rate. In 1989, there was a division of what used to be the Aral Sea into two relatively small bodies of water (the Northern, Small and Southern, Large Aral), between which the dried sea bed appeared.

For 30 years (from 1950 to 1980) the Aral Sea remained in the shadows with its problems and information about the developing ecological disaster of global scale, which was kept in strict secrecy. Only in the mid-1980s was this terrible tragedy given publicity. But it was already too late. Of course, it was possible to stop the flow of water, take measures and save the remaining volume, and subsequently restore the original one. But the authorities decided the matter differently, by letting the environmental problem of mankind go unchecked.

By 2003, the Southern (Large) Aral Sea had already divided into two reservoirs again, and the salinity level in them exceeded the norm. There are no 34 varieties of fish in the Aral Sea before the catastrophic drying up of the Aral Sea. All that remains in these salty waters is phytoplankton (40 species). This is the entire specific ecosystem of the once fish-rich sea.

The Northern Aral Sea (small) is better preserved, since Kazakhstan’s side in 2003-2005 began to implement the project “Regulation of the Syr Darya River bed and the Northern Aral Sea”, thanks to which the drying of waters of the formed Northern reservoir decreased. The construction of a 17 km long dam, which allows the flow of water from the Syrdarya River to accumulate here, has noticeably helped to regulate the water level in the Northern reservoir. The higher water level and lower salinity made it possible to breed several varieties of fish suitable for fishing in the Small Aral Sea.

But the Aral Sea took with it not only the diversity of fish. The entire area of the Aral Sea region is now an arid desert Akuum with “petrified” low bushes and frozen ships. As if there was no water at all. In addition, all that salt and pesticides, deposited on the seabed for a long time, are now blown away by the wind for many hundreds of kilometers, affecting not only the scarce vegetation, which is trying to grow in the region, but also human health. Serious diseases of the nasopharynx and eyes, liver and kidneys became more frequent among the inhabitants of the Aral Sea region. Maternal and child mortality has increased. The death and devastation of an entire region, a huge section of the Earth – the work of human hands!

This is not the first time the Aral Sea has dried up, the remains of trees on the shallowed seabed testify to that. In addition, the remains of two settlements of our ancestors and the mausoleum of Kerderi, which dates back to the XI-XIV centuries, were found on the dried bottom. According to the method based on radiocarbon analysis of the shallowed Aral Sea soil, with which scientists conducted studies to establish the age of the Aral Sea, it is 20-24 thousand years old. The question arises, did our ancestors also face such a terrible ecological problem, and accordingly, what decision was made by them to bring the disappearing legend back to life?

What does it mean to see the Aral Sea today? We provide such an opportunity – Aral Sea Tour “Frozen melody”. View the program of the Aral Sea Tour at the following link: https://minzifatravel.com/trip/tour-to-aral-sea-5-days-uzbekistan-trip/-aralskoe-more
Journey to the vanishing legend will take much time, but it’s worth it. To see the Aral Sea and think what we people can do with our planet, its beauty and resources – to preserve or to destroy?

Water is life! Remember this!