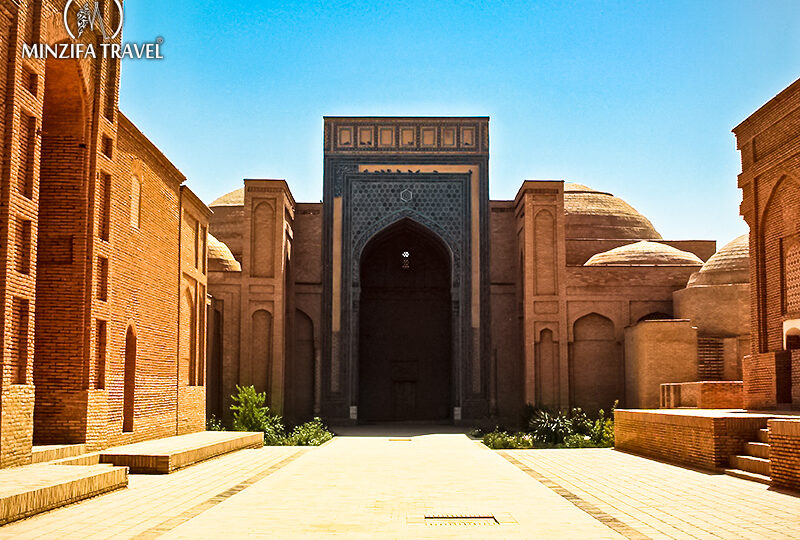 The Sultan Saodat (“king of happiness”) mausoleum complex is the family tomb of the Seyid dynasty. The beautiful domes and light, as if floating mosques behind high walls, this ensemble, which was built over the centuries, is an amazing museum of medieval architecture.

The mausoleums were gradually added to each other and as a result formed a beautiful elongated courtyard. It is enclosed by the oldest mausoleum on the west and by the darvaza khana on the east, with the surviving khanaka across the street.

The ashes of Hasan al-Emir, the founder of the Termez Seyid dynasty, rest in the northern structure. The walls of the mausoleum, divided by three arched niches and covered with rich ornamentation of glazed tiles, and shaped masonry of paired bricks and crowning all the huge dome give the appearance of the building volume and stately severity.

Of particular artistic interest is the majolica facing tiles of the decor, with glaze and unusual multicolored painting.

“Kampir-tepa” is a citadel surrounded by a moat and a “lower town” surrounded by a fortress wall with towers on the steppe side. The citadel, which has many meters of cultural layers of the Hellenic period, began to be built at the end of the IV century BC.

The massif of one-time Kushan dwellings discovered here dates back to the reigns of kings from Soter Megas to Kanishka I (second half of the first century AD – first half of the second century AD). The complex of the material culture of these quarters is the benchmark for the period of formation and prosperity of the Kushan Empire.

The length of the city from west to east stretches for almost a kilometer, from north to south 200-250 meters. The area of the city is more than 4 hectares of land, where the fortress and residential quarters are located.

Fayaz-tepa complex was discovered in 1963 by archaeologist L.I. Albaum during excavations near the Buddhist temple on Kara-tepa hill in the center of old Termez.

The temple complex was noted for its richly painted decoration and well preserved sculptures. Its plan is a U-shaped row of corridors, cells and sanctuaries.

There is a separate Buddhist stupa, which is also of great interest.

Termez archeological museum was built and opened in 2002 to celebrate 2500 anniversary of Termez city. Today it is the first and the only archeological museum in the Central Asia, many unique exhibits of which are dated by the researchers more than 100 thousand years B.C.

Among them there are 624 unique museum relics of world significance. In the museum halls they are demonstrated using modern information and communication technologies.

Karatepa is a place of worship for ancient Buddhists.

Karatepa is a Buddhist place of worship built on three hills in the northwestern part of Old Termez. Karatepa includes several temples and monasteries that were built at the beginning of the second century A.D. The architecture of Karatepa stands out for its combination of caves made in sandstone and external buildings built of pakhsa and adobe bricks.

The interior parts of the temples were decorated with thematic drawings, ornaments on plaster and sculptures made of loess and clay. Marble-like limestone and carved gypsum were widely used in the architectural decor of the temples.

The Zurmala Stupa is a cult structure of the Kushan era.

Zurmala is a 12-meter Buddhist stupa northeast of the ruins of the ancient city of Termez. It was built in the Kushan era, around the I-II centuries AD, when Buddhism was widespread in the Central Asian region.

The ancient city of Termez is situated 10 kilometers to the west of the modern city. Traces of the whole complex of ancient Buddhist buildings, which overlapped the agricultural fields in the Middle Ages, were found in its suburban area. And the Buddhist stupa over time has turned almost into a shapeless clay mound, in which you can barely recognize the ritual Buddhist structure.

The main sacred place of Termez is Al-Hakim Al-Tirmizi Mausoleum. This architectural monument was built to the north-west of old Termez.

Abu Abdulloh Ibn Hasan ibn Bashir al-Hakim at-Tirmizi was the author of several religious and philosophical works, a religious leader, an outstanding theorist of Islamic mysticism, a famous scholar, and was the founder of the order of dervishes.

“Hakimi” is considered one of the 12 sects of mysticism. He was buried near the citadel of medieval Termez, possibly near the khanaka. Later, a mausoleum of burnt brick was built over his grave. It consisted of one room, a portal and a dome resting on four sturdy arches. The entrance to the mausoleum was on the south side. At the end of the XI century the inside of the mausoleum was richly decorated with carved ganch.

The building of Kyrk-kyz, which means “Forty Virgins”, is popularly associated with the widespread Central Asian legend of the Amazons girls who lived in a fortified castle. Kyrk-kyz is situated outside the fortifications of early medieval Termez, in the suburban area, in an area that was still called Shahri-Saman in the last century, and its name does not accidentally contain a link with the Samanid dynasty.

According to all data, a huge palace country estate, which is Kyrk-kyz, belonged to them. Apparently, it was a summer residence of the royal family (the capital of the Samanids was in Bukhara), made in monumental architectural forms.

Dzharkurgan minaret is located 60 km from Termez, Dzharkurgan district, the village of Minor.

Dzharkurgan minaret is unique in its form and was built in 1109 by the architect Ali ibn Muhhamad Serakhsi in the medieval village of Charmangan. Only the lower tier is left of the original two-tier minaret.

Sangardak waterfall is located 205 kilometers from Termez, on the territory of Sary-Ossi district of Surkhandarya region, 30 km from the rest house “Handiza”. This beautiful waterfall can rightfully be considered as one of the most picturesque sights of Uzbekistan. Sangardak is a witness of many events that took place during the long history of these places.

The Greeks, the Arabs, the common shepherds and the rulers had a chance to admire its majesty. Already passing through the Sangardak Gorge, one can hear the voice of the waterfall, which is getting stronger and stronger. And when you reach it, you realize why people have been striving here for centuries. Falling from a height of 150 meters water breaks into myriads of microscopic splashes that rise into the air in the form of a substance similar to fog. And when this cloud reaches you, you feel as if you are missing, both top and bottom, and there are no mountains or burning sun around you.

Unlike other natural wonders, the Sangardak waterfall can not only be seen, but you can hear it singing, dip into its breath and breathe it in. And also let it play on the strings of your soul the melody of kindness and wise eternity.