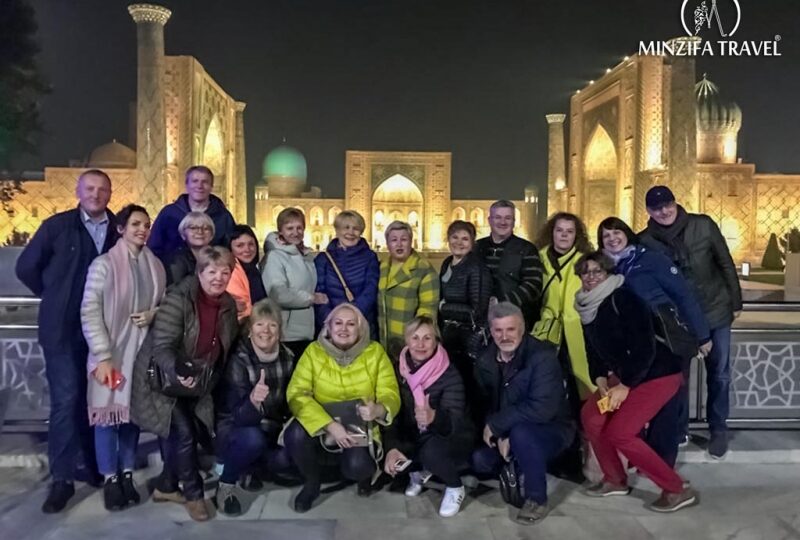 Tour to Uzbekistan gives the opportunity to get acquainted with the country and its tourist gems – Khiva, Bukhara, Samarkand and other cities. During the long journey we will see the monuments that are included in the UNESCO World Heritage List: the center of Bukhara, the old part of Khiva Ichan-Kala, etc. Each tourist will find something for himself in this trip, will bring a lot of vivid pictures and, of course, unforgettable impressions.

Our tour operator has prepared a program for 11 days of the tour, so that the trip will be rich and help to get acquainted almost completely with the features, traditions, culture and flavor of the country. Today we will tell you just a small part of what you can see during the spring break in the eastern country.

Spring tour in Uzbekistan begins with a city that can surprise even the most spoiled tourist – Khiva. On its territory there is an amazing attraction, preserving more than 50 ancient monuments on its expanses. The ancient city of Ichan-Kala is surrounded by a fortress, inside there is everything for a comfortable and fascinating stay of a traveler.

On the way to Bukhara, a true gem of Uzbekistan, we will visit the 11th largest desert in the world called Kyzylkum (which means “red sands” in Turkic). It is located not only on the territory of our country, but also includes part of Turkmenistan and Kazakhstan. The area of the desert is about 300000 kilometers. In the southwestern part it is bounded by the Amu Darya River, near which we will stop to enjoy the incredible scenery.

Registan is the real heart of Samarkand and the unique decoration of the whole Central Asia. The square confidently confirms the title of the most magnificent in the world, striking with its grandeur and beauty.

Registan is a very large area decorated by an ensemble of 3 medieval madrassahs. In 2001 it was included in the UNESCO List. The central part of the ensemble is represented by the greatest building of the Islamic world – Tillya-Kari Madrassah, with Sherdor and Ulugbek Madrassahs next to it.

Central Independence Square is a special attraction of the capital. Its territory occupies about 12 hectares. On the square there are state, administrative buildings, the Senate of Uzbekistan. Mustakillik is decorated with a park area with the Alley of Glory and memory of fallen soldiers during the Second World War. The park area borders with Ankhor river canal, which almost 12 months a year pleases with green grass.

At the end of our spring tour of Uzbekistan we will travel to the outskirts of Ferghana. And the first point on our tourist map will be the Kamchik mountain pass and the winding serpentine that will bring us to the city of Margilan. It is considered to be the most ancient city in the valley and is famous for its ikat patterns and fine silk. Here there is a famous silk weaving factory “Yodgorlik” and there is a master of hand weaving.

After that we will go to Fergana city, where we will have a sightseeing tour and drive to Rishtan village. Its locals amaze us with their unique craftsmanship in the production of pottery with predominant blue color in the decorative elements.

The last point of the trip is Kokand city, where the palace of Khudayar khan of the 19th century and the mausoleum-mausoleum of Modari khan’s women, who were his relatives, are situated. After the city of Kokand, all tourists once again go to Tashkent and return home – happy and spiritually fulfilled.