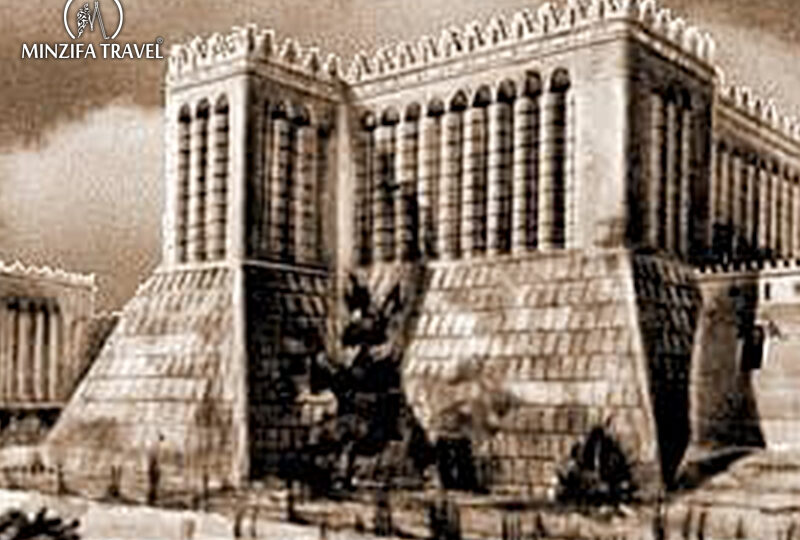 The routes were lively, but also very difficult, because they went through the desert. Their main routes are described in the eastern roadbooks.

There are several routes, the passage of which depended on the time of year and the state of vegetation – the forage base of pack animals. The main stopping points of the caravans were the desert rabats, sometimes so rare that the caravans had to make double crossings until they reached a point provided with water.

One of the roads ran northwest through the fortress of Varakhsha, which some historians described as a large settlement with a citadel but without a cathedral mosque and moats; others stressed that it was the seat of kings and had strong fortifications, and its rabad was similar to that of Bukhara. In Varakhsh one-day bazaars were held every two weeks, and on the eve of the new year there was a twenty-day fair, which was called the bazaar of the New Year of the Farmers. All this eloquently indicates the important role of Varakhsha in the economic relations of Bukhara oasis.

The settlement of Varakhsha is located approximately 35-40 km north-west of Bukhara in the area of ancient irrigation lands, now occupied by the desert with sparse saksaul bushes. Here, among the sands, the hill of the fortress rises up to 10 m high and 9 ha in area, with powerful brick and pakhs towers and bastions protruding from the precipices. Excavations of archeologists showed that Varakhsha appeared as a fortified center on the border with the nomadic lands in the antique period and played a certain role in trade communications of the middle basin of Amu Darya.

In the early Middle Ages it became a country residence of the ruling nobility of the Western Sogd. Growing powerfully in the defensive plan and at the same time bright ceremonial citadel with spectacular corrugated facades of the powerful closed semi-columns. The monumental palace of rulers Bukharhudat was the pearl of the city, with its enormous reception halls decorated with monumental polychrome mural painting and typical for the early Middle Ages composition scenes depicting the life of Sogdian nobility, scenes of receptions, feasts, military battles and tournaments, and wild animal hunts. The huge “Red Hall” is spectacular, showing scenes of the royal young man’s entourage hunting tigers on an elephant. The iconic scene with the altar of fire is interesting. No less expressive are the decorative decorations made of white ganch. They are found in many halls. But the main mass of relief ganch decoration was concentrated in the southern enfilade of the palace, where it filled many rooms and the aivan area.

The drawings and compositions of carved ganch reveal the high level of Varakhshi art – realistic and highly artistic, decorative – and at the same time, a very lively cast of life in Central Asia.

Life in the palace ceased in the second half of the VIII century. This is due to the fact that in 760 in Central Asia has risen a powerful anti-Arab revolt of “men in white robes,” led by Mukanna. The ruler of Varakhshi supported it. And when the revolt was suppressed, the Caliph’s Arab cavalry stormed the palace. The governor was killed. A pogrom was apparently committed in the palace and the independence of the Varakhshudat was eliminated. But the city continued to live on. As an important point on the trade route it is mentioned in many roadbooks in the tenth century. But then the city itself and the oasis around it become desolate.

It was covered with sands of the advancing desert (Shishkin, 1963). One of the branches of the subsequent routes passed through the deserted city, the other branches led more directly.