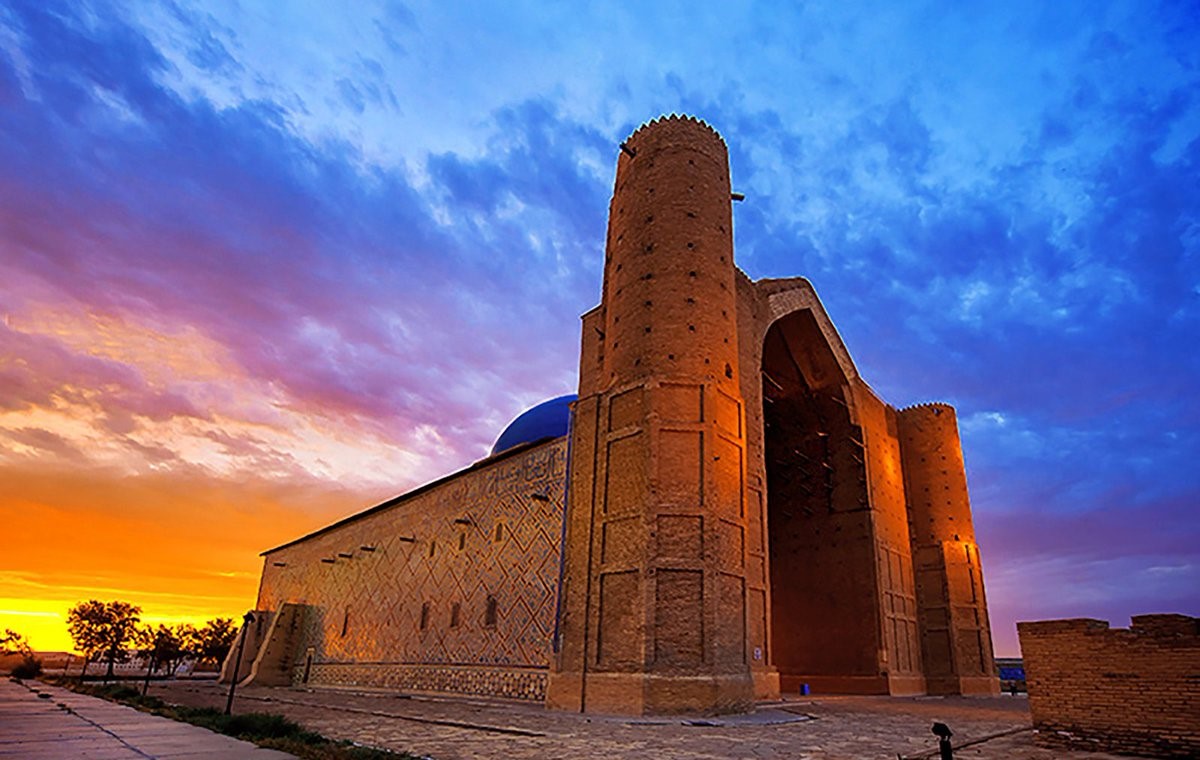 In the middle of the arid steppes of southern Kazakhstan lies the wonderful city of Turkestan. It has survived many wars and cataclysms over one and a half thousand years, but it has remained as authentic and mysterious as ever.

Turkestan has a desert but moderate climate, so you can come at any time of year. The most favorable months are spring, autumn and June.

Many centuries ago, it was established at the crossroads of the Silk Road cities. In the Middle Ages, Turkestan served as a real fortress, and years later was recognized as the spiritual capital of the Turks. Muslims equate a threefold visit to the Kazakh city with a hajj to Mecca.

You will not be bored when you come to Turkestan, because you can always visit:

It is rightly called the most important and recognizable landmark of the city. The structure was built and named after the man who made Turkestan famous. It is here that prominent Kazakh biy, batyrs and khans are buried.

In addition to the building itself you should see a bronze lamp of the end of the 14th century, which was given to the mausoleum by Tamerlan. Inside the dishes from which the pilgrims used to eat have been preserved. Here is also the tomb of the poet.

Here rests Arystan-baba, who is called the predecessor of Yasawi. The legend says that Arystan-baba received the rosary from the Prophet Muhammad and then passed it on to Khoja Ahmed. Of particular interest is an ancient sample of the Koran, which is in a prominent place, but under glass.

Legend has it that one day Tamerlane had a dream that he had to build a temple in honor of Arystan Baba, which had been constantly destroyed before. Upon awakening, the conqueror said that after this mausoleum was completed, he would begin creating a monument for Yasawi. Since then, pilgrims have been visiting the mausoleums in this order.

The name of the attraction speaks for itself: it is an ethnic village. Here every tourist can plunge into the atmosphere of the Middle Ages and learn more interesting things about the history of past generations. Flowerbeds and lawns, trading rows, wooden bridges, gazebos, swings, yurts, sculptures, wells and shooting gallery – the aul has everything to have a fun and productive time.

This is the only complex of its kind in all of Central Asia. The building of the original shape will tell tourists the story of the bird Samruk, sacred to the Kazakhs. In 8D format visitors can enjoy a spectacular show and learn more about the history of the city.

Despite its status as the “religious capital of Kazakhstan,” Turkestan is also great for recreation in the classic sense of the word. The entrance to the amusement park is decorated by an arch. From it along the alley you can walk to the “Peace Tent” – the center of the complex. Under the “Marquee” there is a sculpture “Tree of Life”, one of the most photographed sights in Turkestan.

The park has rides that were brought from Italy, so even adults can feel like children. Sports grounds and playgrounds dispose to active recreation, and tennis alleys – to unhurried walks.

Singing fountain in the form of a lotus is one of the most beautiful objects in Turkestan. The main fountain is surrounded by small lotuses, which creates a unique composition. The fountain “sings” songs in English, Kazakh and Russian. It is a favorite place

Kazakhs for the evening pastime.

Turkestan is a city of contrasts. Ancient mausoleums successfully coexist with modern shopping centers, and the locals with equal interest visit ethnic auls and 8D shows. Why not try it yourself? With Minzifa Travel it is possible! If you have any questions, please contact us on WhatsApp or e-mail travel@minzifatravel.com. We look forward to your messages and calls!