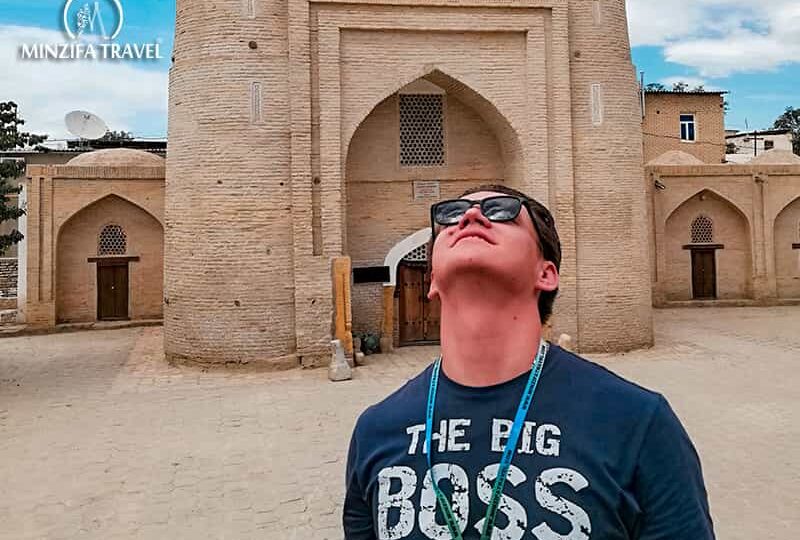 Before going on vacation to the desired country, the traveler usually enters the expanse of the Internet, in order to learn about the cities, attractions, safety, visa regime, currency, weather and so on…

This article will be about Uzbekistan and its cities, more precisely about the ancient and wonderful city of Bukhara and 5 places to visit (the most popular, holy, atmospheric, philosophical and mysterious place)

P.S. The selection of the Top 5 is based on the author’s choice based on a visit to the places mentioned in the article and can disagree with your or other opinion.

By the way – Registan is the name of the parade squares in the cities of the Middle East.

The most popular place: Poi Kalyan Square (The Foot of the Great).

The real pearl of ancient Bukhara is architectural ensemble “Poi Kalyan”, consisting of three structures of XII-XVII centuries: Kalyan minaret, Kalyan mosque and Miri Arab madrassah. It is located on Registan Square. The name of the ensemble, which translates as “Foot of the Great”, implies that the square with the architectural ensemble is located at the foot of the minaret of Kalyan, which means “Great”.

The Kalyan Mosque (Majid-i Kalon) occupies one hectare and up to 12 thousand people used to gather under its arches simultaneously. The construction of this unique construction was completed in 1514. The big court surrounds the arch-domed gallery. The basis for 288 domes is served by 208 columns. The longitudinal axis of the courtyard is completed with the dome-portal volume of the building with the cruciform hall, above which the massive blue dome rises. There are interesting architectural techniques in the building. For example, one of the domes has a hole through which below you can see the base of the minaret of Kalyan, and stepping back step by step – to count all the belts of patterned masonry minaret to the rotunda. The mosque and the minaret are connected by an arched passage.

The main – Eastern – entrance to the mosque is decorated with a large portal with mosaics. The portal is on an elevated site and several steps lead to the courtyard of the mosque.

Each step down has a view of the main building of the mosque. There are two blue domes on each side, and an octagonal structure, which acts as a pulpit, is near the central axis of the inner portal. The colored facades are clad with mosaic and glazed bricks which gives the mosque a smart and unique look.

The complex is visited by up to 1000000 tourists annually.

Twelve kilometers from Bukhara is one of the most important religious sites revered by Muslims in many countries – the memorial complex of Bahouddin Naqshbandi, who founded the Sufi brotherhood. He was born near Bukhara in the village of Kasri Orifan, lived in different cities, but his last years lived in Bukhara.

His philosophy is well disclosed by a short phrase – “Heart with God, but hands in labor”, i. e. Naqshbandi did not call his followers to seclusion, but believed that they should work diligently in their chosen field, be it farming, craft, trade or state activity. The famous poets Alisher Navoi and Jami are said to have been members of this Sufi order, which became one of the most widespread in the world since the 15th century.

Bahouddin Naqshbandi died in 1389, and in 1544 Khan Abdulaziz built his tomb vault – dakhma with a marble carved fence. Near is located khanaka – the building of the cult purpose, painted mosque Muzaffar – khan and mosque Hakim Kushbegi, the facade of which is a minaret and a small madrassa.

To the west of the dakhma is a vast necropolis – the tomb of Bukhara rulers. This complex is popular not so much with tourists as with the pilgrims who conduct their rites and prayers here.

The most atmospheric place: Lyabi House Ensemble. (“On the Shore of the House”)

The artificial reservoir, 46 meters long, 36 meters wide and about 5 meters deep, was built in 1620. By steps made of yellowish limestone blocks located around the perimeter of the house, Bukhara watermen descended to the water to draw water for the population. Literally, “Lyabi Hauz” translates as “shore of the pool”, but there was an unofficial name – Hauz-i Bazur, which means “built with compulsion”. Associated with this name is a legend that when Vizier Nodir Divan-begi (whose name is associated with the construction of two other structures in the ensemble) ordered a pond between the Kukaldosh madrasah and the Divan-begi madrasah to complete his plan to combine all the structures into a single ensemble, an elderly Jewish widow, whose house was located on the site chosen for the pond, did not want to sell her house and yard. In order to persuade and force the landlady to sell her house, she was brought to Emir Imam Kuli-khan, who commissioned the Council of Muftis to consider the case.

The Muftis decided that the widow’s property could not be taken away by force and that Jews should have the same rights as Muslims because they pay a tax – the jizya – for the right to practice their religion. Later, the widow agreed to give up the house and the plot for free, but in exchange she asked for another plot and permission to build a synagogue.

That is how not only the reservoir was built, but also the first synagogue in Bukhara.

In the Middle Ages, Lyabi – House, located near the main shopping street of Bukhara, was also a place where a large number of transactions were made. There are three magnificent constructions around the reservoir which decorate the general ensemble of Lyabi-Hauz.

The Madrasah – Chor Minor – “Four Minarets” – is located behind Lyabi Hauz in the north-eastern part of Bukhara and dates back to 1807. It is a complex consisting of buildings with ritual and residential purposes.

It is noted for its original architecture – attached to the madrasah building are four small minarets topped with blue domes, the decor of which is not repeated. Three of the towers were used as service quarters, while the fourth had a staircase leading to a domed hall, where there was reportedly a rich library. Each of the four towers has a different form. Interestingly, in the artistic design of these towers can also be seen elements of the four world religions, including a cross and a Buddhist prayer drum.

Original from the outside, inside the building is an ordinary mosque for daily five-time prayers. The presence of the dome also gives the hall the significance of a zikr khana, that is, a place where Sufis conduct their ritual ceremonies. Living quarters – hijras – for students were adjoined to the side walls of the central building. However, since the structure has no room for classes, one may assume that it was used as a dormitory for students. The Chor-Minor is the only one that has survived.

The most mysterious place: the Samanid Mausoleum.

The Samanid mausoleum was built more than a thousand years ago, at the beginning of the 10th century, by ruler Ismail Samani for his father Ahmad ibn Asad. The mausoleum later became the family tomb of the Samanids, where Ismael himself was buried. It is located near Registan, in the Samanid park. Not remarkable for its grandeur and size, nor for its blue domes or multi-colored mosaics, the Samanid mausoleum is nevertheless a unique structure. It is the first mausoleum of its kind in the history of Islamic architecture.

The architectural building of the Samanid mausoleum belongs to the type of building known since Samanid times as the Zoroastrian temple of fire. The structure is erected inside a cube covered by a dome hemisphere, where the cube represents the stability of the earth and the dome the sky, their harmonious unity – the likeness of the universe. According to experts, none of the architectural monuments of the world has a similar way of decoration, thanks to the work of ancient architects and masters, amazing with the exquisite masonry of burnt bricks. The openwork ornament made of brick looks like lace, and the structure itself seems light, airy and almost transparent. The whole look of the building does not resemble the classical type of architecture that took shape later, but the creators of the mausoleum in many ways foresaw the trends that were characteristic of the architecture of subsequent centuries, such as the continuous ornamental – decorative covering of the building both outside and inside.

Experts note that each side of the mausoleum was processed and solved in such a way that it could turn into a complete form of a portal, which became a favorite motif of later period architecture. Today we can see the oldest monument of Islamic architecture in Central Asia and the only preserved architectural monument of the times of Samanid dynasty thanks to the fact that, according to the legend, in the XIII century, during the invasions of Genghis Khan’s troops, the mausoleum was covered with sand and thus it was saved from destruction.

Thank you for your attention