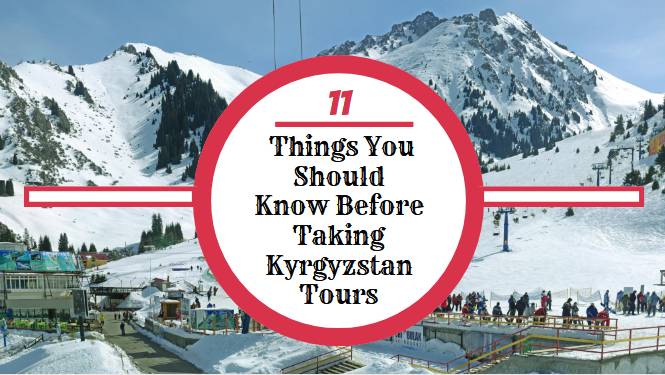 Kyrgyzstan is a country which has been greatly defined by its natural beauty. There is so much to witness here for tourists such as blissful & pure mountain capes, bleak wrinkled ridges and rolling summer pastures that are brought to life by semi-nomadic, yurt-dwelling shepherds. Moreover, there is a well-developed network of homestays and visa-free travel, and it’s easy to see why Kyrgyzstan officially known as the Kyrgyz Republic, is also the gateway of choice for many travellers in Central Asia. Thus, through Kyrgyzstan Tours tourists can explore an untouched world that remained isolated from the world because of political turmoil and uncertainty.

Here are those 11 qualities that draw people to this country so much so simply as follows:

The huge mountains covering Kyrgyzstan are actually its true ambassadors. They are large, huge and completely splendid. The magnificence of these mountains is such that every mountaineer who is coming here will just love to settle here forever.

By the way, there are three 7000 meter peaks here and all of them are fairly accessible if climbers are willing to walk and ride. Here, you are going to get guides at damn cheap prices. The yardstick is same even for the porters and horses for heading into these hills & believe it or not, it will be one of the highlights of Central Asia Tours.

There are some 2000 lakes here in Kyrgyzstan and most of them are small mountain lakes. Interestingly, in the Kyrgyz language, the world for Lake is “Kul” & it is something which you will see a lot. A popular lake is also known as Issyk-Kul & it is one of the best of attractions of Kyrgyzstan Tourism.

It’s an area with some of the best infrastructure and tourism development, and the huge lake is just magical. It’s the second largest mountain lake in the world which is 60 kilometres wide & 182 kilometres long. Sometimes, it’s also called as Monster Lake because of its enormous size. Some of the visitors might even forget Bora-Bora after coming here.

3. It Is The Definition Of A Cultural Melting Pot

One of the biggest surprises for globetrotters in Kyrgyzstan is the wide range of cultural and ethnic groups which are staying in the country with lots of love and harmony. The main language is Russian but everyone here also speaks Kyrgyz too.

Believed to be descended from 40 original tribes, the main current religion is Islam. But, explorers who are coming here will be watching & feeling the exact opposite of this narrative. It will really not feel like any other Islamic country.

The common thing that people are going to find here is yurts while wandering in the country during the Kyrgyzstan Tours. It is a camp type accommodation which is only found in the hilly terrains here. Though the area is very much modern now still traditional nomadic culture is being preserved by the habitats here, most people live in houses and modern apartments in the cities as well.

One of the best ways to stay is at the yurt camps and they are almost everywhere and are also super cheap. It’s a kind of accommodation which will remind ramblers about Southeast Asia but even better, holing up by the lake in a yurt by drinking 60 cent beers and getting a tan and gorging yourself on homemade meals in the communal yurt. Such a home staying really makes the trip awesome.

5. One Of The Easiest Central Asian Countries To Visit

The most interesting fact that makes this central Asian country so special is that it is one of the easiest visa-free countries to visit. At least 45 countries are on the list having visa-free access for their citizens for up to 60 days.

People mainly from the European Union, USA, Canada, New Zealand, and Australia can visit this country and enjoy the stay here for two months without worrying about the visa. Completely cool, isn’t it?

6. The Food Is Delightful

It is another important factor that makes this country so desirable for holidaymakers paying a visit here and it is none other than the food.

You will get all types of food here such as Barbeque meats, all the noodles, tons of flavour and spices and of course, you will also get to eat lots and lots of dumplings.

7. Fermented Mare’s Milk Is Often The Drink Of Choice

Till now, people have always tasted the milk coming from cow & goat etc. But have you ever tested the milk of a Fermented Mare? It is a natural beverage that will also make you forget modern cocktails like vodka, beer & whiskey.

It might be a dairy product but it’s closer to wine. It is just like taking tequila shots. It’s a tantalizing drink which day-trippers can drink at their own expense. If you are on Kyrgyzstan Holidays you can take it or leave it, it’s just your call.

8. The World Nomad Games Are A Must!

Every two years, the world nomad games take place in Cholpon Ata in an arena which is something similar to the gladiator & it is just like Olympics for the central Asian nomadic people where they compete in 16 traditional games & sports.

It’s a game that requires a player to memorize seven generations of their fathers & grandfathers. It’s a game that gives utmost importance to family & the past related to them.

Most of the people coming from other parts of the world might know the names up to their grandparents only. But in order to play the game to the fullest, a person has to know everything about the family’s history.

Drinking tea is a huge part of the culture in Central Asia & Kyrgyzstan is not an exception. Normally, if a visitor meets a person, the visitor is greeted with a cup of tea. But when it comes to Kyrgyzstan thinks to take a different turn.

There are time and again elaborate rituals around how the tea is served to visitors & who serves them, what it all means, that’s almost not understandable to outsiders. But if you want to fit in with the locals, if you are offered a cup of tea next time, also add a spoonful of jam into it.

11. It’s The Most Beautiful Place You’ve Never Heard Of And Now’s The Time To Go

Yes, this place is truly a hidden gem and perfectly fits to define this central Asian country. Additionally, tourism is recently begun to be more established in Kyrgyzstan, and only in certain parts of this country.

If you are a fearless & curious adventurer who wants to get off the beaten track then go-ahead with your plan & start looking at flights to Bishkek.

Once you are in the central Asian region, especially in Kyrgyzstan then you are going to explore & do things that you have never done before in your life. Weird situations throughout Kyrgyzstan Tours will be thrown at discoverers and they will just enjoy facing them. This country really deserves to be visited once in a lifetime. Please visit us @ minzifatravel.com for knowing more about the wonders of Kyrgyzstan.