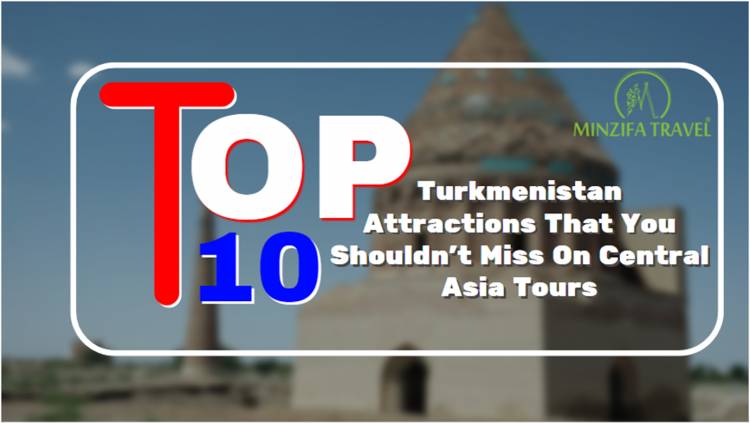 Turkmenistan is a distinctive and fascinating country located at the gateway of the Silk Road route. It has long been at the crossroad of cultures and religions with tons to offer visitors. It has an array of destinations of archaeological importance and remnants of the past, interesting food and culture as well as the magnificence urban centre.

If you are a history buff, Turkmenistan is the place you should visit as you can see and learn a lot about the past and olden days which it has encountered over the years.

Turkmenistan some of the best natural, historical, cultural and adventure sites in the Central Asia Destinations. Listed below are the Top 1o Turkmenistan Attractions that you should visit on your trip to Turkmenistan:

The capital city of Turkmenistan, Ashgabat is one of the youngest and the largest city in the country. Located between the Kopet Dag Mountain range and the Kara Kum desert, Ashgabat has the highest concentrations of marble buildings.

This city houses the famous “Turkmenbashi Ruhy Mosque” which is the largest in Central Asia.

Turkmenistan is set at the heart of Karakum Desert. It occupies 70% of Turkmenistan, having a big importance on the region. It is the hottest and one of the biggest Deserts in Central Asia. It has some sights like the Darvaza Gas Craters.

Dashoguz is located in Northern part of Turkmenistan in the Dasoguz Province. Dashoguz received world’s attention when a 7 Kilograms meteorite fell in the city. Now it has become a hub for tourists visiting the Konye-Urgench.

Konye Urgench is a municipality situated in the north-eastern part of Turkmenistan.  Urgench is an ancient town which was the capital of Khwarezm, which was devastated by Ghengis Khan and the Mongols. The city was annihilated with water from the Amu Darya River. You can witness the SoltanTekes Mausoleum and the Gutluk Temir Minaret from that era which stands tall despite the terrible history.

Mary is the third biggest city to explore during your Turkmenistan Tours which lies along the Silk Road. It is located at the heart of the oasis and desert called the Kara Kum Desert. There are many places to visit here including the famous history museum which houses a grand collection of the national dresses, Turkmen rugs and artefacts’ from the ancient times.

It houses some of the beautiful towers of ancient settlements and monuments 10th-12th- century era.

Annau Archaeology Site is an archaeological site situated in the Silk Road Destinations. Notably, the excavations started off here in 1904 during which remnants such as skeletons of children, oldest of remains of camels, painted pottery and geometrical decorations of the bygone times. It is believed that camels were domesticated first ever in the world here. The other important thing to experience here is the SeyitJemaldin Mosque which is unique with blue tiles making it appear different than all the others.

A UNESCO World Heritage Site is one of the main Turkmenistan Attractions sites. It was one of the most important cities of the Empire of the Parthians. It was completely destroyed by an earthquake which devastated the place in the first decade BC.

Tolkuchka Bazaar is the best bazaar in the country for incredible souvenirs. Spread over acres land outskirts of town the stalls bazaars go on across the desert.  You can find a variety of goods here including jewellery, pistachios, carpets, and other goods. You can also find some vendors sell livestock like goats and camels. Bargaining for a reasonable price is acceptable here.

If the above-listed Turkmenistan Attractions inspires you to plan a trip to the country or if you want to discover Central Asia Destinations on a tailor-made tour then you can visit us at minzifatravel.com for more detailed information about the various packages to Turkmenistan. We are looking forward to your queries.