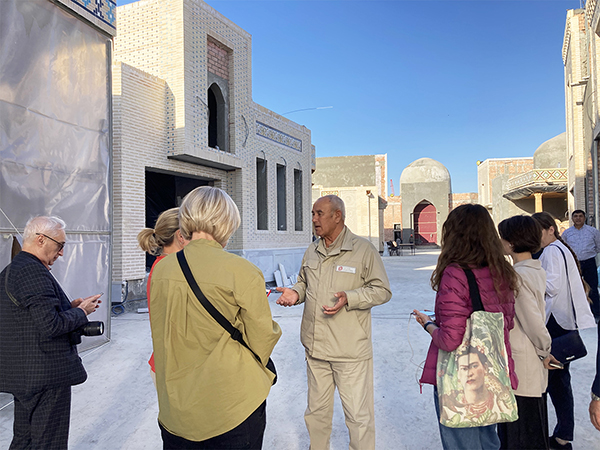 On the territory of Silk Road Samarkand resort are created objects that will allow you to get acquainted with traditional ancient crafts, without leaving the comfort of the complex. Crafts center “Eternal City” will be located on an area of 4 hectares. The project includes about 50 rooms where masters of lacquer miniatures, copperplate embossing, woodcarving, calligraphy, embroidery, tailoring national clothes from khan-atlas, Kharezm papa, ceramics, carpet weaving, etc will work. The project is supervised by the famous artist Bobur Ismoilov, who is well acquainted with the local color.

According to the idea of the founders of the project “Eternal City”, tourists will be able to see all the variety of folk crafts in one place. RATA-news correspondent managed to see how these crafts are used even during the construction of a huge complex. Masters decorate new buildings with carved beech columns, traditional plaster moldings, make mukornasi, put tiles and majolica, paint walls in traditional Samarkand style.

Usually, to introduce tourists to the diversity of culture and crafts of Uzbekistan, tourists are organized route through several cities, including Samarkand, Khiva, Bukhara and others. You can travel by high-speed train “Afrosiab” or by regular train. It takes two or three days to explore each city leisurely. There really is something to see, Uzbekistan – a real treasure trove of crafts, which are often handed down from generation to generation. The country has about 40 thousand craftsmen.

One of the important place is taken, for example, ceramics. Dioshod Nabiev, owner of a workshop in Samarkand, said that today almost every region has its own school of ceramics. The most sonorous crockery is made in the Fergana Valley, in Rishtan. This is the oldest center of ceramic art in Central Asia. The second most popular school is Gijduvan. It is the only preserved pottery school of polychrome glazed ceramics. There are also Samarkand, Khiva and Tashkent schools. Each of them has one or two trends. The quality of clay and firing technology determines the thickness of pottery, its strength and sound. The higher the firing temperature, the longer the sound of the crockery is, the sound can last up to 12 seconds.

Gijduvan dishes have a bright metallic sound. Bright sunny colors are used in painting. Turquoise and blue on a white or blue background distinguish dishes from Rishtan. The more intricate the pattern used, the more expensive the traditional pottery. Not so long ago masters from Tashkent began to apply the original technology of painting with convex colors. To further diversify the ornaments, artisans transferred the traditional pattern for khan-atlas to ceramics. Such dishes can be seen in many restaurants in Samarkand.

Jurakul Inoyatov, director of the Samarkand association “Usto” and a member of the Academy of Arts of Uzbekistan, who directly recruited the pool of masters for the “Eternal City”, said that the staff is already complete. “I select masters so that all crafts of Uzbekistan are represented as widely as possible, so that specialists complement each other,” he said. In one of the halls of the “Eternal City” models will show national clothing, an exhibition hall is provided, there will be a summer and winter restaurants with 400 seats each, outdoors will be made samosa and, of course, the famous Samarkand lepyoshka. “Tourists will have dinner, get acquainted with our crafts, walk the streets among the stylized buildings, buy fresh products and famous dried fruits at the market, which will also be organized here. At the master classes, for example, in ceramics, we will show not only different schools, but also how the clay takes shape, how the firing is done,” explains the interlocutor.

The Eternal City complex will be part of the large-scale Silk Road Samarkand resort, which is in the final stages of construction and will be launched in time for the Shanghai Cooperation Organization forum in 2022. The opening of the new airport in Samarkand is also timed to coincide with this event.

In general, the Silk Road Samarkand resort will occupy an area of 260 hectares, unprecedented in its scale. Eight hotels with a total of almost 1200 rooms will open here simultaneously. Among them are Samarkand Regency Amir Temur 5, Savitsky Plaza 4, Silk Road Samarkand by Minyoun 5, Lia! by Minyoun Stars of Ulugbek 4. Modern public spaces, parks, restaurants and cafes as well as an international congress center and medical complex based on four 4* and 5* boutique hotels will open.

The project developed by an international team of architects and engineers will unite different thematic zones into an architectural ensemble, which has no analogues in the Central Asian region.

Natalia Rudakova, specially for RATA-news
Photo by the author and Anvar Ilyasov