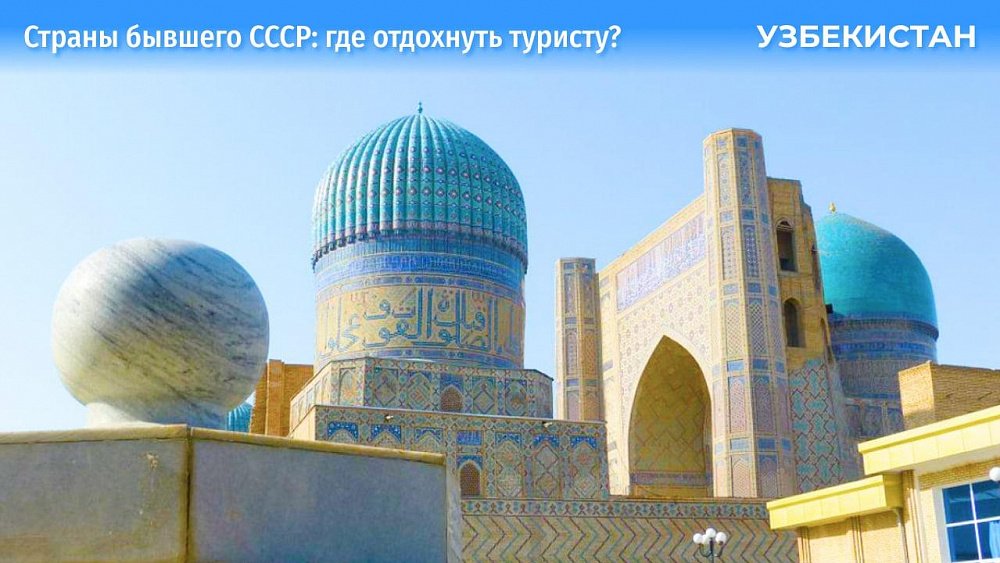 Uzbekistan is a state in Central Asia with a rich historical heritage, ancient cultural traditions and a special architectural look. Tourists come here to visit museums, to visit the desert, to admire the cotton fields and to touch the historical heritage of the Timurid Empire. What to see in Uzbekistan and what the rules of entry to the country are now – in the section “Countries of the former Soviet Union: where to rest a tourist?

Uzbekistan is located in the heart of Central Asia, between the Syr Darya and Amu Darya rivers. It borders Kazakhstan, Kyrgyzstan, Tajikistan, Afghanistan and Turkmenistan. Steppes and deserts occupy nearly two thirds of the country, with mountains, valleys and oases making up the rest.

The country’s population is about 33 million people. The capital of Uzbekistan is Tashkent, a city of about 2.5 million people. The state language is Uzbek. But 80 percent of the locals know Russian, so the language barrier will not hinder the traveler. Warm weather in the republic is established in May and lasts until mid-October.

The currency unit is Uzbek sum. In the cities there are exchange offices where you can exchange currency, including Russian rubles, at the current rate.

Rules of entry and restrictions

When traveling to Uzbekistan, it is important to be aware of the registration of travelers. Within three working days after crossing the border, you must register at the place of stay. The hotel will give you a coupon confirming the fact that you are staying here. It is advisable to keep it until the border control when you return home.

Tourists without the vaccine must have a negative PCR test (with an electronic QR code) done at least 72 hours before arrival in Uzbekistan. If neither is available, you will need to take an express test at the border crossing.

Bukhara is a real museum city. Ancient mosques, citadels, mausoleums, madrassahs, monuments – all this you can visit while walking through the city. Once upon a time the Great Silk Road went through Bukhara. Ark Fortress in Bukhara is one of the oldest structures of the city. Up to the beginning of the XXth century the fortress was a residence of the local rulers. Also in Bukhara see the minaret and mosque of Kalyan, the Samanid mausoleum, the necropolis of Shahi Zinda.

Khiva is another city located on the Great Silk Road many centuries ago and is listed as a UNESCO site. In the old town of Ichan-Kala, there are about 60 historical monuments, including a citadel, palaces, mosques, minarets and mausoleums. Outside the old walled city is another ancient part – Dishan-Kala, where there were residential buildings and shopping malls. In Samarkand, the tourist will be interested to see the Registan Square, which exists for more than six centuries, and Bibi-Khanum Mosque, a sacred monument of the XV century.

Uzbekistan is also rich in natural attractions. Charvak reservoir is a place worth visiting for tourists. In the background are the peaks of the Tien Shan Mountains. Here is an actively developing resort infrastructure: the best hotels of Uzbekistan, summer camps, resorts and tourist centers are operating today on the coast.

Between the Amu Darya and Syr Darya lies the great desert of Asia – Kyzyl Kum. Chimgan mountains are not only beautiful nature, picturesque slopes with relict bushes, valleys and gorges with the clearest mountain rivers. It is also a popular tourist area, where skiing, paragliding and hiking flourish.

The Fergana Valley is a true pearl of Uzbekistan, with rich and very picturesque nature. There are several cities in it, in each of which the traveler will find its own flavor. For instance, there are silk factories in Margilan city. Artisans carefully preserve the secrets of making Margilan fabrics. Chadak village is famous for its sweet apricots and walnuts.

You cannot leave Uzbekistan without shopping: dishes with national patterns, fragrant spices, things made of natural silk and cotton, dried fruits, honey and sweets – all this you can buy in local shops and bazaars.

What to try from the national cuisine?

Plov. It is the first association with the cuisine of Uzbekistan, a calling card of the country and even an intangible heritage taken under UNESCO protection. Local plov is a must-try. By the way, in Samarkand, Bukhara, Tashkent and some other cities the recipes and ways of cooking plov are different.

Laghman. It is cooked from lamb and vegetables with handmade noodles. In Uzbekistan, you can try two types of dish: chuzma lagman (pulled) and kesma lagman (sliced). If you order the first version, you can watch the process of pulling the noodles – it is a separate ritual, curious to the tourist.

Manti. Filling for this dish Uzbeks like to prepare from lamb, sometimes from other kinds of meat, which are often added turkey fat or pumpkin. Vegetarians in Uzbekistan also have something to try: manty with pumpkin, potatoes or other vegetables. It is customary to wash down the dish with katyk.

Patyr. These delicious and always fresh flatbreads are a popular street food in Uzbekistan. Despite the simple composition, they are special. They are baked on a flaky or puff pastry. The crust is crispy and the middle is soft. Patyr is baked in tandoor, sprinkled with sesame seeds, cumin, or poppy seeds. In Uzbekistan, you can buy it still hot from street vendors.

Dymlyama. Uzbek-style roast will be appreciated by fans of meat cuisine. Meat is poured in broth and then piled on top of it. The stewed vegetables: cabbage, potatoes, flour, peppers, eggplants, carrots, chopped in large pieces, are placed in layers on the broth. The mixture is generously sprinkled with aromatic herbs and then stewed in the cauldron over low heat for a long time so that the meat is thoroughly saturated with vegetable juices.

How to get there?

The most convenient way to get to Uzbekistan is a direct flight to Tashkent, the capital of the country. Islam Karimov International Airport, located just 5 km from the city center, is the largest airport in Uzbekistan.

“Uzbekistan is clearly one of the leaders in the CIS in terms of the quality of excursion programs offered. Those who have been there are surprised by the beauty of this country and its hospitality. However, for our tourists Uzbekistan is still exotic. Mostly people who come there are those who came from the Soviet Union and know that Uzbekistan is interesting and cool. For young generation, this country is the absolute terra incognita. Armenia, for example, is more familiar and understandable for them.

Uzbekistan has plans to develop tourism ties between the states. In March 2022, the parties signed a document on a joint project, which includes 20 events. For example, it is planned to hold the Year of Tourism, develop and launch a route for travelers “The Great Silk Road”, create special offers along the lines of festival, gastronomic, wine, extreme, winter and other types of tourism.