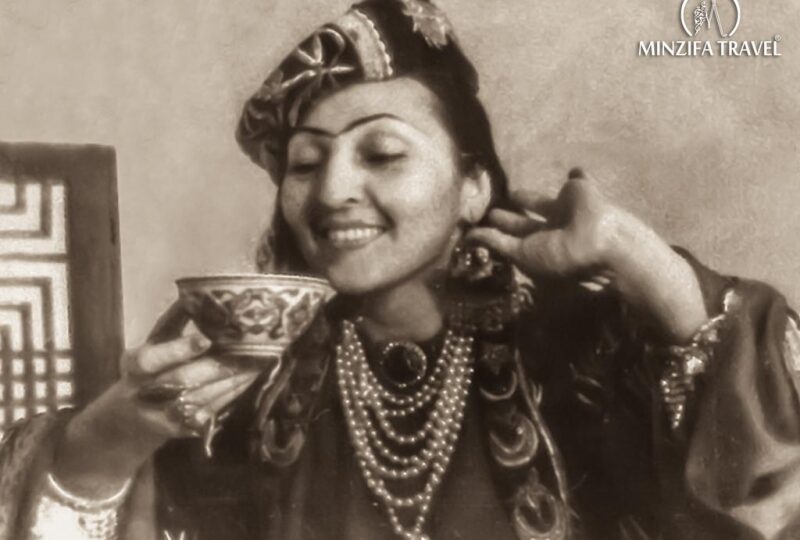 The Khorezmian folk dance “Lyazgi” has been around for many hundreds of years. The dance culture of Khorezm has been changing and improving for centuries, acquiring new and distinctive forms with bright and expressive technique, emotional intensity and openness. Performed by Uzbek masters of dance art, the sensuous dance of the Khorezm school has for many years brought joy and aesthetic pleasure to people around. Nowadays, it is also popular and becomes more and more important.

Literary and historical sources, as well as monuments of material culture tell us about the centuries-long history of the Khorezmian dance. Images of masked dancers have been preserved on the walls of this incredible structure.

Only thanks to the people, the living soul of dance and the imagery of historical cultural monuments have been able to carry through the eras. These people are direct evidence of the richest national traditions. National legends and fairy tales, songs and dance refrains of “rivoi”, their names are kept – great artists and shepherds, peasants and poets, brave warriors and craftsmen. In Khorezm, from ancient times to the present day, not a single holiday, ritual or custom passes without a dance.

Khorezm choreography is based on the structural-stylistic method, which allowed identifying the following four types of Khorezm dances:

The comic genre includes all the dances and dance pantomimes of the mascharabozes. The witty illustration of life events, phenomena and characters is presented as if through the prism of comic means. Comic dances and pantomimes are divided into comic, labour and imitative (to birds and animals).

Imitational dances and dance pantomimes performed by Khorezm maskharabozai until recently can be referred to more ancient genre of dancing art. This is evidenced by the attire of maskharabozes, who dress up in the skin of an animal and use masks depicting the animal’s muzzle.

Apart from humorous and imitative dances, the comic genre also includes work dances. They reveal a person’s character and professional qualities, as evidenced even by their names:

The circus dances of the mascharaboz solemn genre include:

“Hukka uyin (dance on stilts) is considered to be a virtuoso and one of the most difficult types of dance. Standing on two-meter long stilts, the performer rhythmically moves by throwing his legs in different directions, in addition, he also accompanies himself on kajraks (stone castanets).

Traditional dances of solemn and lyrical genres were usually performed at festivals and entertainment dedicated to successful hunting, harvest gathering, military victory, wedding or birth of a child, etc.

Everyday dances were considered the most typical folklore dances, based on traditional dancing structures. Ritual dances, which lost their magic power, often became dances of everyday life. Everyday dances, unlike ritual ones, emphasised improvisation and renovation. The plot, plastics and structure of the dance were retained but the movements were filled with new emotional content. The plot in everyday life dances could be traditional or created on the occasion of some events.

The ceremonial traditional and everyday dances include:

Lyazgi – the calling card of Khorezm

“The ljazgi” is the calling card of the dance art of Khorezm. It is not just a dance, it is a whole system, it is always a holiday, a holiday for the soul. “Lyazgi” can be solemn, lyrical and comic. They differ in the way they express the performer’s feelings, emotions, worldview, and understanding of the world. The slow chorus sounds at the beginning of the dance. The dancer comes out at a measured pace, performs hand movements decorated with zangs.

Suddenly she freezes in a static pose, capturing the attention of the audience. Then on the musical phrase the pose begins to fall apart and at the end of the “knee” sounds the chorezmian “key” (a certain combination of movements) and the dancer freezes in another pose. With each new sounding of a musical phrase, the tempo of the dance speeds up and each time ends with the “key. The dance strikes with a huge number of invariant movements, it seems that the performer is composing her own choreographic image before the eyes of the audience. “The Clangs” can’t leave anyone indifferent. The dance captivates by its brightness, expressiveness, life-affirming energy, causing the delight of the audience.

Many have seen the “Lazgi” dance performed by People’s Artist of Uzbekistan Gavkhar Rakhimova and Tamara Khanum in archival video recordings. What was striking was the brilliance, emotionality, fervor and enthusiasm with which these extraordinary women performed. Tamara Khanum is the creator of the women’s Khorezmian dance, developed on the basis of such dances as “Mavrish”, “Rumalim” and “Bartavil”.

In 1968 Gavkhar Rakhimova organized and led the republican dance and song ensemble “Lazgi”. The rich heritage left by these outstanding artists gives an opportunity to actively develop modern choreography in Khorezm. A dance lives only when it is performed.