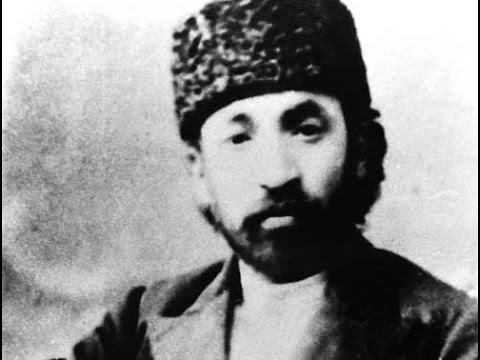 Abdurauf Fitrat was an Uzbek historian and poet who spent his life fighting for the enlightenment of the Uzbek people. Fitrat was born in the ancient city of Bukhara in 1886 into the family of the rich and respected Abdurakhim bay and the literate Mustafobibi. Since the cradle Fitrat’s mother sang to him lines from Koran, recited poems and fairy tales that sank deep into the boy’s mind. His parents sent their son to study first at a traditional Muslim Maktab (school), then sent him to Bukhara’s Miri-Arab madrasah, Central Asia’s most prestigious religious school.

Fitrat, an Uzbek historian and poet, graduated from the madrasah and, at his father’s urging, embarked on the hajj (pilgrimage) across the Ottoman Empire, India, and Russia. A keen reader of Uzbek, Arabic and Persian literature, Fitrat always stood out for his well-rounded thinking and was noted by his teachers as an intelligent and resourceful young man. During this period of his life Fitrat is seriously fond of Jadid ideas, propagandizing the Muslim peoples to enlightenment, to the development of Turkic languages and literature, secular disciplines, the use of science. In addition, the Jadids promoted equal rights for women.

In 1910 Fitrat, as a member of a group of the most gifted and talented students, was sent to Istanbul to continue his studies at Istanbul University. While a student, he with his peers organized the society “Bukhara Education”, whose members discussed the problematic aspects of life, life and education of Turkic peoples. In Turkey, Fitrat published his first works “Munazara” and “Stories of Indian traveler,” which were written in Farsi and later translated into Uzbek and Russian.

In Turkey, Abdurauf Fitrat – Uzbek historian and poet also publishes articles in the Turkish newspaper “The Right Path. At the same time, he writes an open letter to the emir of the Bukhara Khanate, in which he states: “You can close your eyes and ears as much as you want, but you cannot realize the poverty of our dear Motherland. You have brought your homeland and nation to such a state that the neediest people in all corners of the earth are crying blood when they see our life…”

After his return to his native Bukhara in 1913, Abdurauf Fitrat, an Uzbek historian and poet, worked in various districts of Bukhara as a teacher, actively promoting the ideas of Jadism. In 1914 Fitrat published his first collection of poems “Na’ra” (“Howl”), in which he attacks not only the local Uzbek authorities, but also the Russian rulers. Because of his views, Fitrat begins to be persecuted. He is persecuted from Bukhara, then from Samarkand to Tashkent. Thanks to his efforts, the Uzbek language becomes official; invaluable manuscripts are collected and systematized; the first music school is opened; the delegation of 70 Uzbek men and girls is sent to Germany for training. Under his leadership, textbooks for schoolchildren were published, the national theater was opened, and order was restored in the sphere of cultivation and irrigation.

It is when he is persecuted by the authorities, but his activity reaches its peak, Abdurauf Fitrat – Uzbek historian and poet is actually happy for his homeland. But in 1923 this happiness comes to an end. It is urgently requested from Moscow that Fitrat be fired from his job and removed from all affairs. He is summoned to Moscow with urgent requests to remain in the capital. There Fitrat is under the strict supervision of the NKVD, working as a professor at the Institute of Oriental Studies.

In 1927, Fitrat returned to his homeland, where he worked until 1937 at the Samarkand Pedagogical Institute, and at the Tashkent Institute of Language and Literature. Although in those very years, Abdurauf Fitrat and wrote his best works, full of bitterness, telling about the struggle of the people first against the local government, and then against the Bolsheviks. But these works are not published, warning the poet of the consequences.

In 1937, Abdurauf Fitrat, an Uzbek historian and poet, was arrested, and a year later in 1938 he was shot. Fitrat was posthumously rehabilitated in 1962. All his life he fought for the enlightenment of his people, for the prosperity of his homeland – Uzbekistan, he died from the unenlightened views of the government.