We are open 24/7 in case you'd like to speak to a travel specialist.>
Give us a call at +998936591107 or send a request by mail Enquire by email
Home➜Destinations blog➜Central Asia Blog➜Tajikistan Blog➜Garm-Chashma – tours and attractions 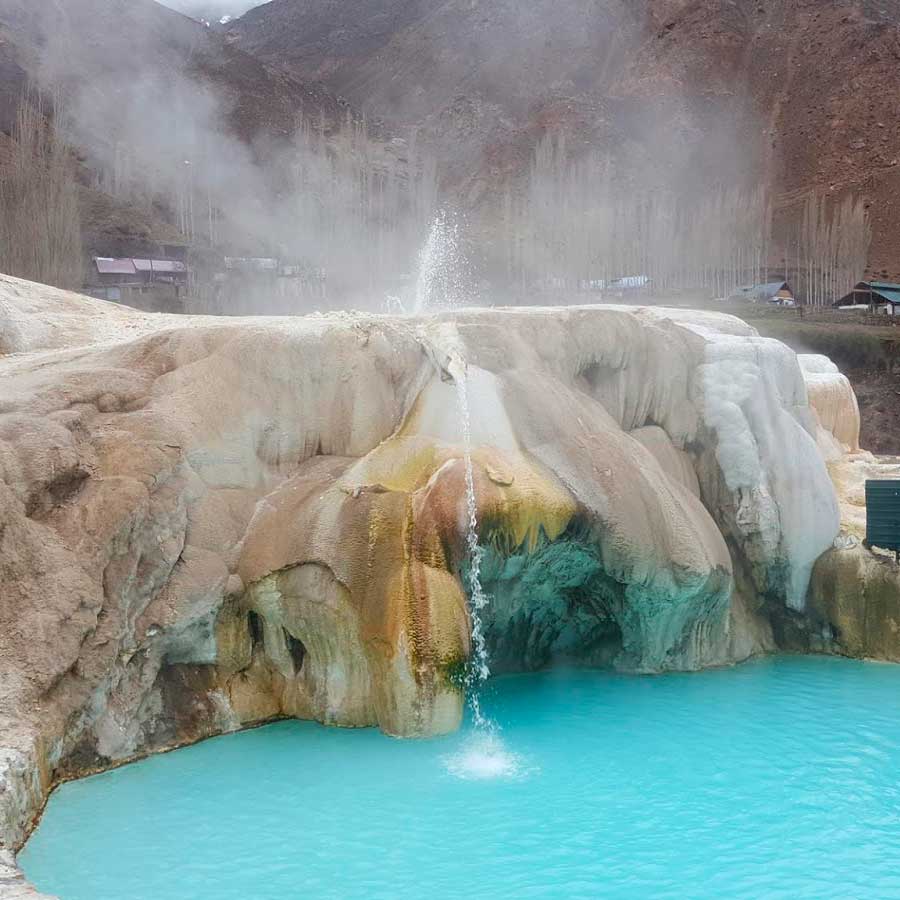 Garm-Chashma is a combination of great beauty and healing gift. The name of the resort translates as “hot spring”, which absolutely explains its purpose. Get well and enjoy the beauty with Minzifa Travel!

What to see in Garm Chashma?

The Garm-Chashma Spa was created in 1957, but its history began long before that. The spring has existed for more than a thousand years, and the locals quickly realized the effect of its waters. Treatment with water from the spring helped even people who were denied help by the leading healers of the area.

Such adoration of Garm-Chashma lasted for more than a century. In the early twentieth century, scientists gave a scientific explanation of the therapeutic properties of the water, but pilgrims still continue to believe in its sanctity. They do not care how or why the water from the spring helps to heal: they still come to the resort and offer prayers.

In Garm-Chashma there are not only hot springs, but also cold springs. They contain narzan, which people who come to the resort for recovery take instead of therapeutic water.

Around the spring there is a sanatorium of the same name, one of the largest and best known in all of Central Asia. This sanatorium helps people with diseases of respiratory organs, musculoskeletal apparatus, heart and blood vessels, as well as with gynecological and skin diseases.

Improvement procedure is as follows: a patient takes 20-25 baths with different compositions, in each bath he spends no more than 15 minutes. In case of acute illnesses vacationers are offered not only a bath but also heliotherapy.

The springs of the resort are located surrounded by the mountain ranges of the Pamirs. They are bath-shaped and lined with light frozen stalactites: they have different shapes and sizes due to the uneven deposition of salts. Tourists taking a bath have the impression that they are sinking into a glacial lake.

The water jets contain limestone and salts: being beaten out of the bowels of the earth for centuries, they have formed a hill of milky hue. The hill is covered with bizarre patterns formed by mineral impurities. The average temperature of the springs is +64°C.

The Garm-Chashma resort is located in the Ishkashim region in a flat area at an altitude of 2,500 meters, so it has very harsh winters. In late September, the air temperature drops to -25 ° C, and in the summer warms up to +30 ° C. There are constant winds in the area, so even in July or August you do not feel the heat.

When is the best time to go to Garm Chashma?

Garm-Chashma has a favorable climate, so the trip will be pleasant at any time of the year. People come to the resort not only because of the mineral springs, but also because of the clean mountain air, discharged at altitude. Colorful scenery and continental climate allows you to make up for the lack of positive emotions and relieve accumulated stress.

Garm Chashma is most beautiful in summer at sunset. The sun colors the resort pink, and it seems to glow from within. The resort is surrounded by bushes of barberry, bird cherry, buckthorn, currant and rose, and combined with the mountain peaks and clear skies, tourists have the feeling that they have found themselves in a place of paradise.

Garm Chashma is a rare natural phenomenon that will allow you to fill with beauty and restore your health. Please contact Minzifa Travel to book your tour. If you have any questions, email travel@minzifatravel.com, WhatsApp. Always happy to help!