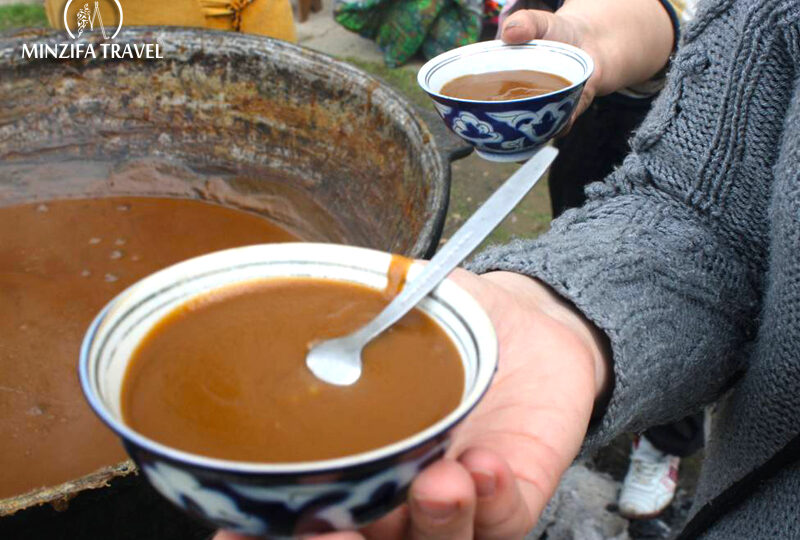 Sumalak is a healthy and delicious dish for the spring holiday of Nowruz (New Day). It has the property to restore strength lost during the winter and gives a sense of vivacity. Sumalak is an ancient dish and takes pride of place on the rich dastarkhan of Nowruz. The dish has several versions of the origin of its name “sumalak” (sumalek, sumanak, sumalak) “Suma” – in the ancient Türkic dictionary is translated as “malted wheat/barley”, and “laks” – “wheat flour”. According to another version, “sumalak” means “30 angels” and was invented by a poor woman who was helped to cook it by the angels themselves (according to legend). Sumalak is a folk dish, as nowadays nobody knows when and by whom this healthy wheat delicacy was made. However, every year on the 20th of March, one can see the following picture: huge cauldrons, cauldrons around which all day and all night long the sounds of fun, songs and dances do not cease – it is “Sumalak Sayli Holiday”, which calls people to friendship, brotherhood and unity.

The process of preparing sumalak is an event in which not only the delicacy itself is prepared, but also a sense of unity and mutual assistance is fostered. Traditionally, during the sowing of wheat in the soil, some of the grains were set aside for the preparation of the main dish of Navruz (New Day) – Sumalak. Each family put into the common cauldron, cauldron their handful of sprouted grains and people all together cooked sumalak.

The sprouted wheat grains are ground and pressed to get a white liquid, which is mixed with flour in boiling oil. And before pouring the oil into the cauldron, pebbles are placed on the bottom, which children are assigned to collect. The stones help to maintain optimum temperature and don’t let the sumalak burn. There is also a mystical purpose. The person who finds a pebble from the cauldron while handling sumalak makes a wish and it is sure to come true; also, the stone can be kept as a talisman.

Sumalak should be stirred incessantly with large spade-like shovel. Usually, women are engaged in this activity, but men are also allowed to join the stirring. It is rather difficult to stir the viscous mass for 24 hours, that is why the cooking involves many people, replacing each other at the cauldron. This explains the tradition of preparing sumalak by the whole street (mahalla).

In addition to the custom of putting pebbles into the cauldron, there are several others, which make the process of cooking even more fun and fascinating. One of them is the interpretation of the pattern that forms under the lid of the cauldron on the surface of the sumalak, as the fire goes out, the mahalla elder is left alone to ripen. Whatever the drawing, it is usually interpreted in a positive way.

The most amazing legend, the legend of a poor woman who lived in a small village on the banks of the Jeyhun River. Her husband died, leaving the poor woman with seven children. In one particularly bad harvest year, food supplies were insufficient for the whole winter and the family was forced to starve. The little children could not understand why their mother would not feed them, and they cried and begged for food. It pained and grieved the woman to watch her children grow weaker and weaker from day to day from hunger. When the children were exhausted and could not even stand up, the poor woman, to relieve their suffering, said that she was just about to cook something tasty. Then she took out the biggest cauldron they had, poured water into it and dug out some germinated wheat in the shed, which she also put into the cauldron – there was nothing else to put. As she stirred the brew, she smiled at the children and told them that the food was very good and that it was about time to sit down at the table. And when some of the children asked her how long they had to wait, she would say that all that was left was to add some more meat and cook it well. Saying this, she threw pebbles into the cauldron to make the children think it was meat, and continued to wait and fight.

This went on all day and all night, and in the morning she fell asleep for a few minutes. When she woke up and opened the cauldron, it was filled to the brim with a warm brown mass, the surface of which showed strange patterns resembling wings. The poor woman realized that while she was sleeping, angels had been in their house, and for not giving up and not letting her children go out, they filled her cauldron with unusual food, which gave strength and strengthened the spirit. The woman fed her children and then began to distribute sumalak to neighbors who were also suffering from hunger. Soon everyone began to repeat the woman’s actions and they also made delicious sumalak, which they immediately shared with each other, which made it possible to survive that hungerful time.

To this day, the custom of distributing sumalak to neighbors and acquaintances as soon as it was prepared has survived. The Minzifa Travel team offers you to taste this delicious and healthy dish, sumalak, while visiting a special tour for Nowruz Holiday.