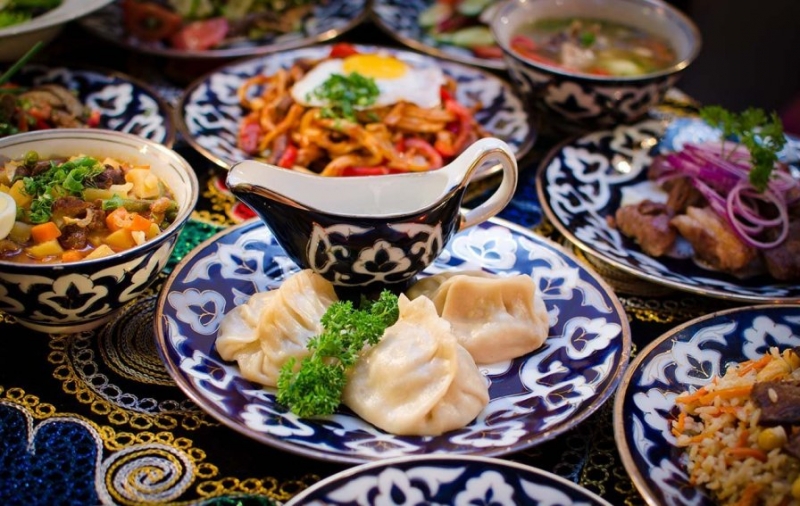 Uzbek cuisine – what is it like, what are its features and what can please tourists coming here Uzbek table? Imagine the scents of Uzbekistan, coming from freshly baked samsa with meat and onions, the faint aroma of freshly brewed green tea, and tickling your nostrils smell of zirvak for pilau cooked in a cauldron. This is just a small part of what vacation in Uzbekistan can please the tourist.

Uzbek cuisine has been forming for centuries, originating from nomadic peoples inhabiting these lands and Persian, Arab and Mongol conquerors who also contributed to the formation of the notion of “Uzbek cuisine”. The main components of the Uzbek cuisine are meat (mutton, beef, less often poultry, fish is preferred in areas close to water reservoirs) and vegetables, which the Uzbek land is rich in (onion, carrot, pumpkin, potato, beet, shalgan, cabbage, etc.).

Uzbek cuisine and its traditional dishes involve frying in fat or vegetable oil (mostly cotton oil) as the most common cooking technique. Steaming and baking in tandoor (traditional Uzbek oven) are also common here. Soups and broths are also cooked here. But there is one dish (perhaps, the only dish in the world) in Uzbek cuisine, cooking of which makes use three basic techniques – frying, boiling and steaming. And this dish is pilaw!

Uzbek cuisine is nowhere without plov! Pilov is traditional dish prepared on the territory of Uzbekistan since ancient times. There is a legend that plov was invented by Alexander the Great, who ordered to cook a dish from the remaining products (and they were mutton and rice) to satiate his warriors who were exhausted from a long campaign. And then, centuries later, the great scientist Abu Ali Ibn Sina (Avicenna) developed a universal recipe that included meat, onions, carrots, rice, oil (fat), salt and water. By the way, it was proved by experts that pilaf includes all the necessary substances and minerals for a person to saturate and restore strength. That is why the Uzbeks like pilaw so much, after a long day of physical work it is the best way to restore the strength of the body!

Uzbek cuisine is rich in dishes based on different cereals (rice, mung bean etc.). From these two components are prepared such dishes as mashhurda (soup) or moshkichiri (porridge).

The cuisine of Uzbekistan is also dishes made of dough, which are either steamed, fried or baked in tandoor. By the way, for baking in Uzbekistan most often meat or vegetable stuffing is used with addition of big amount of onions. Manti with meat or pumpkin stuffing, chuchvara (small fried dumplings with stuffing), samsa (triangular or square small pies with meat or vegetable stuffing). A special place in the list of dough dishes is occupied by lagman (handmade noodles, boiled and seasoned with pieces of meat and lots of different vegetables and herbs), and naryn (thin sliced noodles, boiled in meat broth and served with kazy – horse meat).

Talking about what is Uzbek cuisine, one cannot help mentioning bread, which is treated with special respect in Uzbekistan. Uzbek flatbread is the symbol of the sun (that’s why they are round). They are baked in tandyr (Uzbek oven). An indispensable tradition in any Uzbek family is the ritual of breaking bread (lepyoshka) with hands, and it is done by the oldest of those present at the table. By the way, you will never see anyone stepping over or stepping on the fallen bread in Uzbekistan. A piece of fallen bread will always be picked up and put aside so that no one will “desecrate” it.

So that’s Uzbek cuisine, and that’s certainly not all I wanted to tell you about! It may seem to someone that all dishes of Uzbek cuisine are very high-calorie and fat, but much of the described dishes are prepared without meat and fat (such as fruit pilaf, manty or samsa with vegetable stuffing, moshkichiri without meat, etc.). In addition at dastarkhan you will always have freshly sliced tomato salad with onions or other salads made of fresh vegetables, lots of fresh herbs, which you dip in chakka, and, of course, green tea! It is also worth noting that most Uzbeks are adherents of Islam, and therefore do not drink alcoholic beverages, this also greatly facilitates the digestion of food.

When you come to Uzbekistan, try to try different dishes of Uzbek national cuisine. Perhaps you will discover completely new flavors!