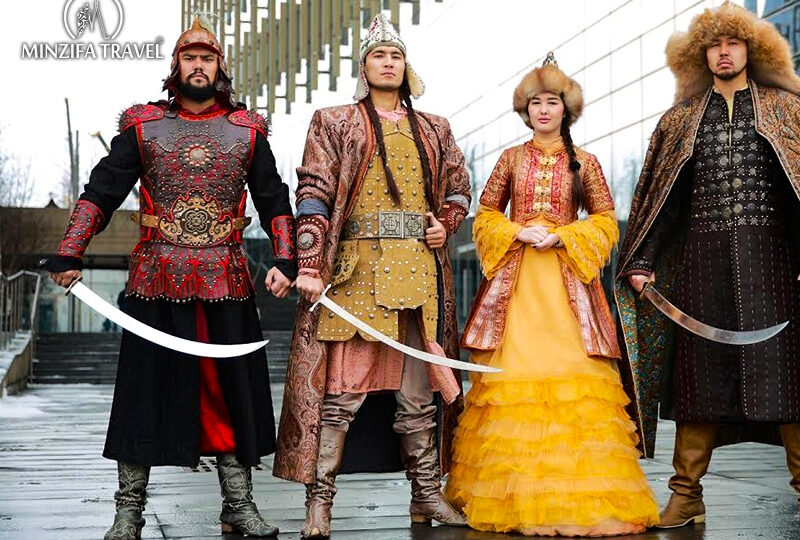 The name itself is Kazakh, the obsolete name is Kirghiz, Kirghiz-Kazak, Kirghiz-Kaisak. The people, the main population of Kazakhstan. The Kazakh language belongs to the northwestern, or Kipchak, subgroup of the Turkic group of the Altai family. The believers are Sunni Muslims. In the past, shamanism and the cult of ancestors played a major role among the Kazakhs.

The Kazakhs are one of the largest Turkic-speaking peoples, the third largest ethnic group in Central Asia, which does not have its own autonomy here. The origin and the exact meaning of the self-name “Kazakhs” are not established. There are many hypotheses. Some say that it is the name of the association of several tribes (Caspians, Saks, Keoghs, Khazars), others (A.A.Semenov) link its origin with “xasaq tengen” (cart on wheels); Kazakh legends derive it from the tribal totem “kaz” (goose), “ak” (white), altered into the name of a girl, the legendary ancestor of the Kazakh people. Pre-revolutionary ethnographers derive the word “kazakh/k/” as “free man”, “free”, “gone from his kin”.

The vast majority of Kazakhs living in Central Asia are concentrated in Uzbekistan (82.8% according to the 1970 census). The bulk of them (93.2% of the total Kazakh population of the republic) is concentrated in the Republic of Karakalpakstan, Tashkent, Bukhara and Syr Darya regions.

In the opinion of V. I. Masalsky, the author of the encyclopedic publication “The Turkistan Region”, “Kyrgyz (Kazakhs – V. G.) are gifted with good mental abilities, and learning is not difficult for them… The ability to perceive external impressions, especially to remember events, people and nature is very significant, but learning abstract notions is much more difficult for them. The Kyrgyz have a lively, sociable and cheerful character; they are resourceful, smart and relatively honest, but sly and cunning. Kindness, hospitality, and respect for elders are among the fundamental qualities of the Kyrgyz.

The Kyrgyz love poetry and the ability to express their thoughts not only clearly and gracefully, but also eloquently. Hence the high development of oral folk literature, distinguished by its richness and diversity.”

For a long time Kazakhs have had numerous political, economic and cultural relations with the peoples of Central Asia. The second, more detailed analysis shall be given only to those contacts, which lead us to the question about Kazakh settlement in the present Uzbekistan.

In Kazakhstan the division into three separated nomadic districts was outlined already in the XVI century: Semirechye, Central and Western Kazakhstan. The Kazakhs called these areas zhuzes: Ulu Zhuz (Senior Zhuz), who roamed in Semirechye (south, southeast of modern Kazakhstan); Orta Juz (Middle Juz), which settled in the territory of Central Kazakhstan (had wintering grounds along the middle course of the Syr Darya River and summering grounds along the tributaries of Tobol, Ishim and Sary-Su and in the steppe regions of Central Kazakhstan) and Kishi Juz (Younger Juz), The Kishi Juz (Younger Juz) owned Western Kazakhstan (its wintering grounds were in the Aral Sea region, the lower reaches of the Syr Darya, on the Ustyurt plateau, on the Mangyshlak Peninsula, in the lower reaches of the Urals, while the summering grounds were in the upper reaches of Tobol, along Irgiz and in the Mugodzhar mountains).

The boundaries of zhuzes were very conditional and approached the borders of the Central Asian khanates – Bukhara, Kokand and Khiva. They could change under the influence of various foreign policy factors. In particular, as a result of the aggression of the Jungar Khanate at the beginning of the 18th century, the Kazakhs of the Elder Juz were forced out of their pastures in the Semirechye. The danger that threatened the Kazakhs from the southeast forced, on the one hand, some of them to rush to Bukhara, on the other hand, the Kazakhs of the Senior Juz squeezed the nomads of the Kazakhs of the Junior and Middle Juz, which caused them to migrate closer to the Russian borders.

In 1723, the Dzungars took over the entire territory of the nomadic Old Juz. The Kazakhs suffered an unprecedented pogrom, which remained in the memory of the people as “the year of great disasters” (ak taban shubrandy). In search of salvation, some of the Kazakhs fled to the borders of Russia, others rushed into Maverannahr. Over 150 thousand families of Kazakhs, who fled in the direction of Samarkand, remained here, settling in the Tashkent, Fergana, Samarkand, Khiva and Bukhara possessions.

In the beginning of the nineteenth century, armed conflicts frequently arose between Tashkent and Khiva over certain Kazakh clans of the Middle Juz, which roamed the eastern side of the Aral Sea. They themselves recognized themselves as subordinated to Tashkent, while Khiva considered them its subjects. In the early 20’s, they were actively settled in the steppe Kanimeh district of Bukhara region, where in 1925 was created Kazakh-Karakalpak autonomous region, populated by 20,268 Kazakhs.

According to the 1920 census, there were 1091925 Kazakhs living in the Turkestan ASSR. After the national partition in 1926, 107,000 Kazakhs remained in Uzbekistan. According to the 1939 census, the number of Kazakhs living there was already 305.4 thousand. The increase was due to the fact that in 1936 Karakalpak Autonomous Republic became part of Uzbekistan, where a significant number of Kazakhs lived, as well as the famine in Kazakhstan in 1933, caused by forced collectivization, which contributed to the migration of Kazakhs in the neighboring Central Asian republics. According to the 1959 census, Uzbekistan numbered 335,300 Kazakhs; in 1970 there were 476,300 Kazakhs.

In comparison with 1959, the total number of Kazakhs in Uzbekistan increased 1.4 times. Such a high growth is caused by the fact that during the intercensal period part of Chimkent oblast of Kazakhstan was given to Uzbekistan. According to rough estimates, this amounted to about 80,000 Kazakhs (these areas have now been returned to Kazakhstan). In 1989 in Uzbekistan there were 808987 Kazakhs, including 30166 in Tashkent.

Traditionally, the Kazakhs were engaged in nomadic animal husbandry. The Kazakhs were traditionally engaged in nomadic animal husbandry, primarily in processing wool and making felt, which was used for making mats and carpets, yurt covers, mattresses and pillows, bags, clothing (hats, cloaks, caftans, capes and saddle covers for riding horses). Closely related to this craft is the processing of leather, which was used to make quivers for arrows, military belts, shoes and vessels, horse harness and saddles. Leather was artistically decorated with embossing.

Kazakh woodcarvers were famous for their products, which were sold in Syr Darya, Bukhara and Aral Sea regions. Large caravans with yurts, carts, dishes and household utensils, which the Syr Darya Kazakh farmers needed, used to come here.

Carved wood was widely used for columns and doors of religious buildings in the Syr Darya cities, testifying to the spread of artistic woodworking among the Kazakhs.

Sources note the special art of Kazakh jewelers – “zergers” who worked with gold, silver and semi-precious stones, and were masters of cold and hot stamping and openwork techniques.

Episodic cases of transition to sedentary life intensified in the late 1920s and early 1930s, largely due to the coercive system imposed by Soviet power. In 1929 the first agricultural-pastoral associations were created, later transformed into collective and state farms. This policy led to a crisis in 1930, intensified by a drought, as a result of which hundreds of thousands of Kazakhs died of starvation. A significant portion of them were forced to migrate to China.

With the transition to a settled way of life there were qualified agronomists, tractor drivers and workers of MTS. In 1932 there were 1,435 Kazakh workers at the enterprises of the Republic. In 1934 in Tashkent 643 people from rural areas alone were employed in construction. In these years Kazakhs made the basic potential of workers from the national minorities of the republic. The Kazakh village councils, Kazakh language schools and Kazakh orphanages were created in some districts.

In subsequent years, the number of Kazakhs living in cities, primarily in Tashkent, grew. They worked in industry, science, and culture. In pre-war Tashkent there was a Kazakh theater. Female Kazakhs were actively involved in this process, primarily as doctors and artists. One of the first Kazakh female doctors – obstetrician-gynecologist Ummi Gulsum Asfandiyarova worked in Tashkent, Papa, Khorezm; gynecologist Zainab Sadykovna Abdurakhmanova – in Khanabad.

Kazakh television and radio broadcasts are regularly broadcast in the Kazakh language in Tashkent and the Tashkent region, and the newspaper Nurly Zhol is published. Programs of Uzbek television to Kazakhstan are organized.

Kazakhs make a worthy contribution to the science and cultural life of the republic. Well-known are the scientific works of the historian Tulenbayev, the ethnographer Shalekenov, the architect Dzhandarbek, the monumentalist-mosaicist Bukharbayev and his son, the miniaturist Bukharbayev.

М. M. Mendikulov (1909-1986) – a major scholar and public figure, architect and teacher in Kazakhstan, from 1930 to 1937 he studied and worked in Uzbekistan. He combined teaching with work in design institutes. In 1941 he took the post of chief architect in Tashkent, but the war interrupted his career as an architect. After his return from the front, from August 1945 to May 1947 he continued to work in the capital of Uzbekistan before being transferred to Kazakhstan.

At the Tashkent university Khasan Alpysbayev was educated as one of the first Kazakh archeologists.

The Kazakh national artist Ural Tansykbayev (1904-1974), a native of Tashkent, lived and worked in Uzbekistan. On the basis of his art studio he created a memorial House-Museum of U. Tansykbaev. The work of the sculptor J. Kuttymuratov became very famous in the region.