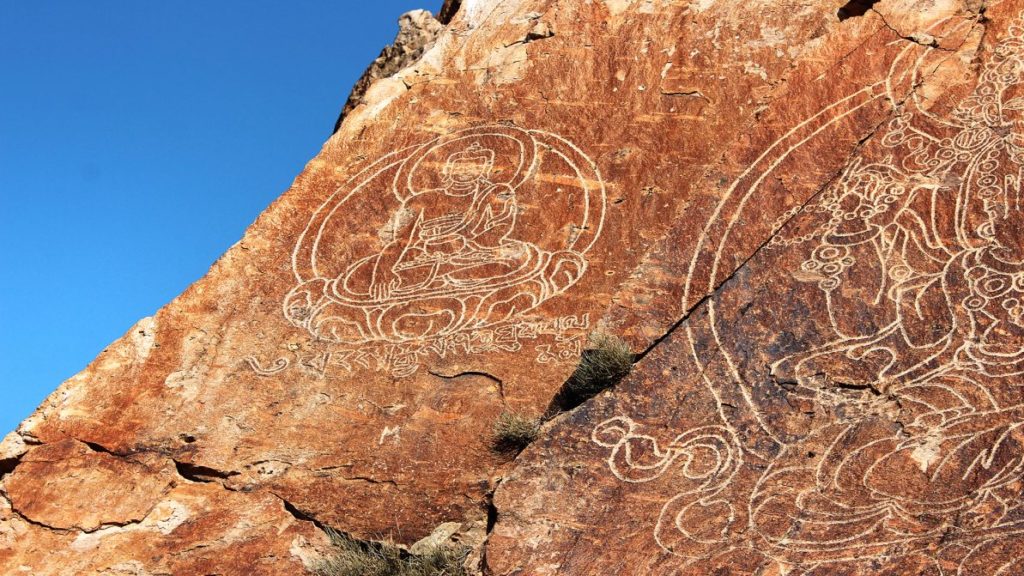 Sacred places have always attracted the attention of tourists and pilgrims. A special energy, search for answers to unsolved questions, contact with eternity: the Tamgaly Tas tract in Kazakhstan is one of such places.

It doesn’t matter what religion you practice or if you practice it at all. Every vacationer will find peace and solitude in this place. And Minzifa Travel will be happy to take care of all your holiday arrangements!

For millions of years, wind and water have formed the rocky and picturesque terrain of the tract. The Ili River has worked its way through clay, limestone and shale to form a river valley surrounded by mountains with gentle slopes and dome-shaped peaks.

The name “Tamgaly Tas” translates as “Written Rocks” or “Stones with Signs. Tourists and locals call the tract a Temple of the Buddha, which only adds to its attractiveness.

In the traditional sense, the tract is not a temple. But there are close-up images of the Buddha carved into the rocks. The drawings are complemented by Tibetan inscriptions, among which are sacred mantras.

The images of Buddha are not just drawings, but real art. The inimitable style is achieved with exquisite contour lines and elaborate stone carvings. There are a total of five images of Buddha in the tract, and all together they constitute an open-air temple.

The Kazakhs believe that the stones purify from any disease: it is enough to touch them for a few seconds. But it is important to believe in the effectiveness of the procedure in order to get results.

Who exactly is the author and artist of the rock paintings dedicated to the Buddha is unknown. But there are several theories:

The art of the tract is not limited to the drawings of the Buddha alone. On the rocks you can also find images of people and animals, scenes of wars and everyday life, which were left by nomads.

In addition to admiring the petroglyphs during the tour, it is worth climbing up the Pisan Rock and sitting on the bank of the River Ila. This is a good chance to get away from everyday life and enjoy the stunning views.

Tamgaly Tas is beautiful at any time of the year, but it is especially pleasant to come here in spring. In this season it is avalanche-prone in the mountains of Kazakhstan, and dirty and slushy in the cities. There is no scorching summer heat, but the sun is already shining and warming in the ancient tract.

Tours by Minzifa Travel will take you to Tamgaly Tas and experience Kazakh culture and Buddhist sentiments. If you have any questions, please contact us by WhatsApp or e-mail travel@minzifatravel.com. We will be glad to receive your calls and messages!