Skip to content (Press Enter)
Home➜Compass➜Destinations blog➜Central Asia Blog➜Uzbekistan Blog➜Sights you haven’t seen yet: a trip to the “heart” of Khiva 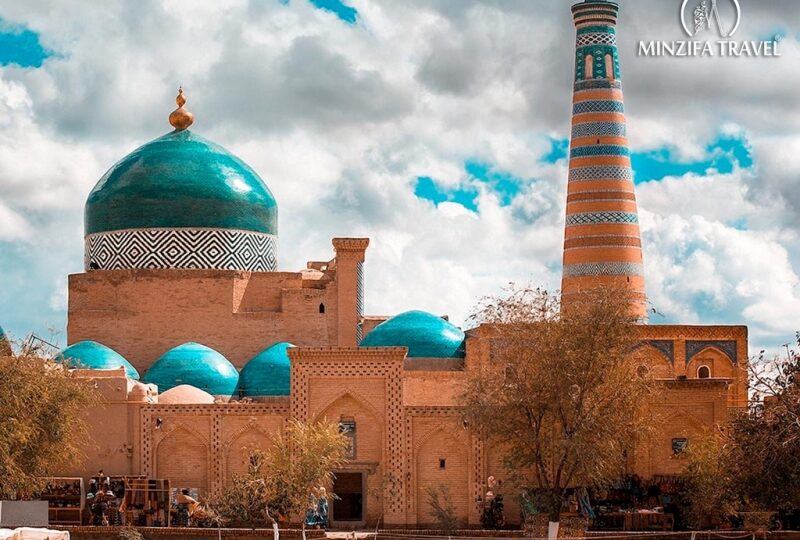 Our spring tour to Uzbekistan begins with a unique city-museum with centuries-old history, where the streets even today create the atmosphere of a real Oriental city of the XVIII-XIX centuries, and the satellite dishes on the houses give the illusion of traveling back in time. Almost all the architectural monuments are located inside the fortress Ichan-Kala, which is hidden behind the ten-meter walls. So what awaits you in Khiva during your tour around Uzbekistan in spring.

The center of Khiva – the old town of Ichan-Kala has preserved on its expanses over 50 memorial monuments: mosques, gateways, fortresses, minarets, baths. It is this place that can give the traveler a complete picture of what a Central Asian city looked like in the Middle Ages. In 1984 it was included in the list of UNESCO.

In addition, the open-air museum city is home to over 4,000 residents who retain the true spirit of Central Asia. The city is surrounded by a clay wall, stretching for more than 2 kilometers in length. The old part of Khiva is surrounded by four gates – on each side of the world.

A unique historical monument preserved in the old part of the city is the citadel Kunya Ark. From the Turkic languages it is translated as “Old fortress”. Earlier it was a residence for many generations of Khiva khans, up until 1920, the khan himself lived here. The square in front of the main gate became the main square of the city. Earlier, parades and training camps were held here.

A work of Khiva architecture is the Pakhlavan Mahmud ensemble, which was built in honor of the poet, fighter and patron of the city. There are blue majolica tiles on the ceiling, walls and tombstone. It is said that there is healing water in the sacred well in the courtyard.

Tash-Khovli means “stone courtyard”. It was built by Allakuli-khan of the Kungrad dynasty himself, who was the only khan who did not like to reside in the citadel of Kunya Ark. Due to his ambition, he managed to create an original design of the palace. In the northern part there is an exhibition of crafts, and in the southern part there is a throne room

Kalta Minor – the symbol of Khiva

From the Turkic Kalta Minor is translated as “short minaret”. The building rises 26 meters, and the base is 14 cm in diameter. Had it been built to its full height, it would have surpassed all known Muslim minarets. However, its construction was stopped when the mastermind of the construction, Muhammad Amin-khan, died in battle. The Kalta Minor Minaret is the only one in Central Asia that is completely covered in majolica and enamel bricks.

A real treasure of Ichan-Qala, the complex includes a minaret and a madrassah. They have become the most recognizable structures of the city-museum due to their atypical shape. The minaret is adjacent to other small madrassas, which makes it look even more majestic. It is the minaret that attracts attention because it is 56.6 meters high. It surpasses the Bukhara minaret of Kalyan. On the height of 45 meters there is an observation deck from which one can see the whole city as if on the palm of his hand.

Besides these majestic constructions, during our tour around Uzbekistan in spring you can also see: Djuma Mosque, Khoja-Islam, Tim Ala-Kulikhan, Madrassah of Muhammad Amin-Khan, Abdulla-Khan and many other sights with special architecture and their greatness. There are also several other cities waiting for you, which we will have time to visit during the 11-day trip. Book a tour in Uzbekistan on a convenient day – we are ready to travel to the oriental fairy tale at a time that suits you.