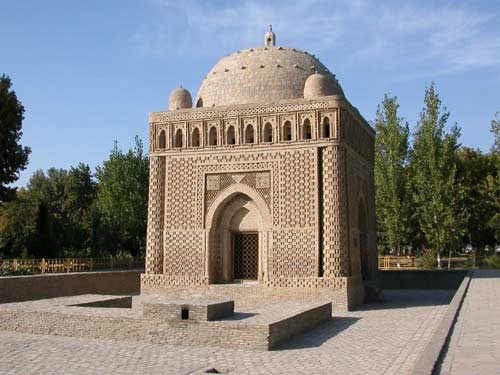 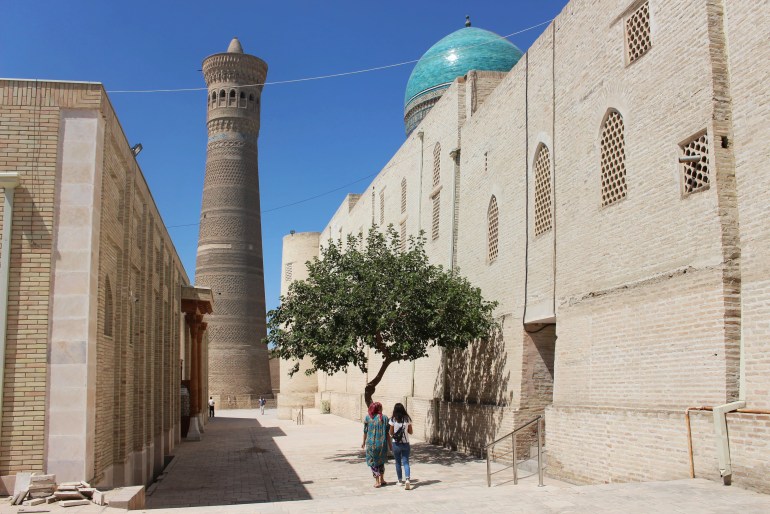 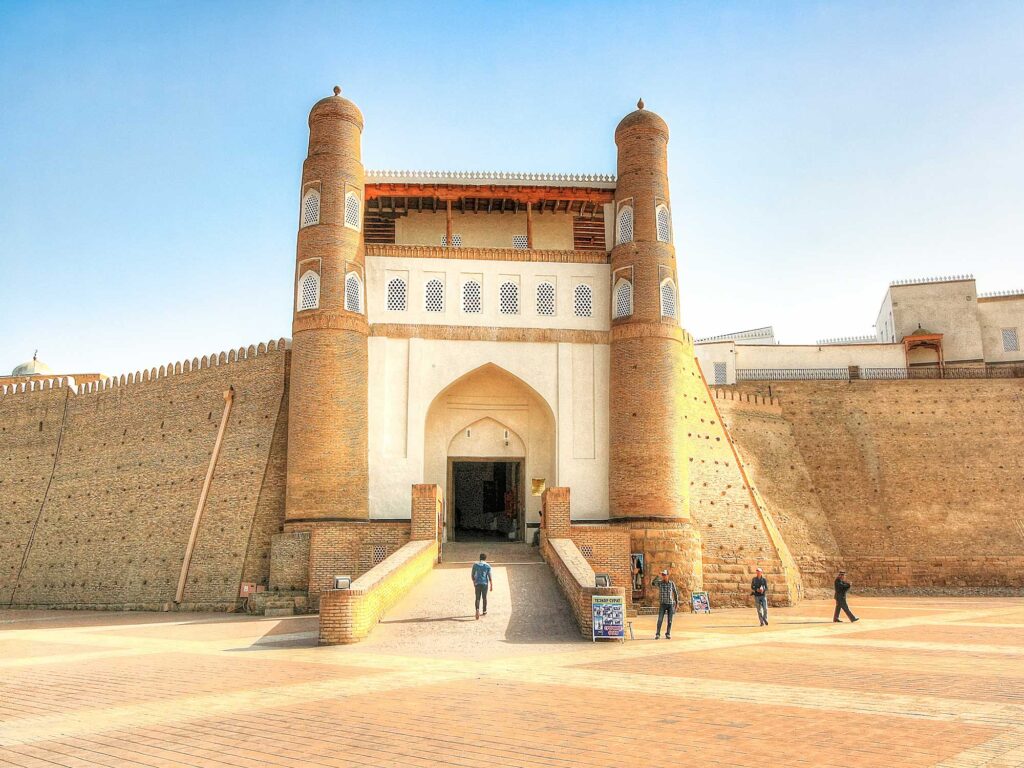 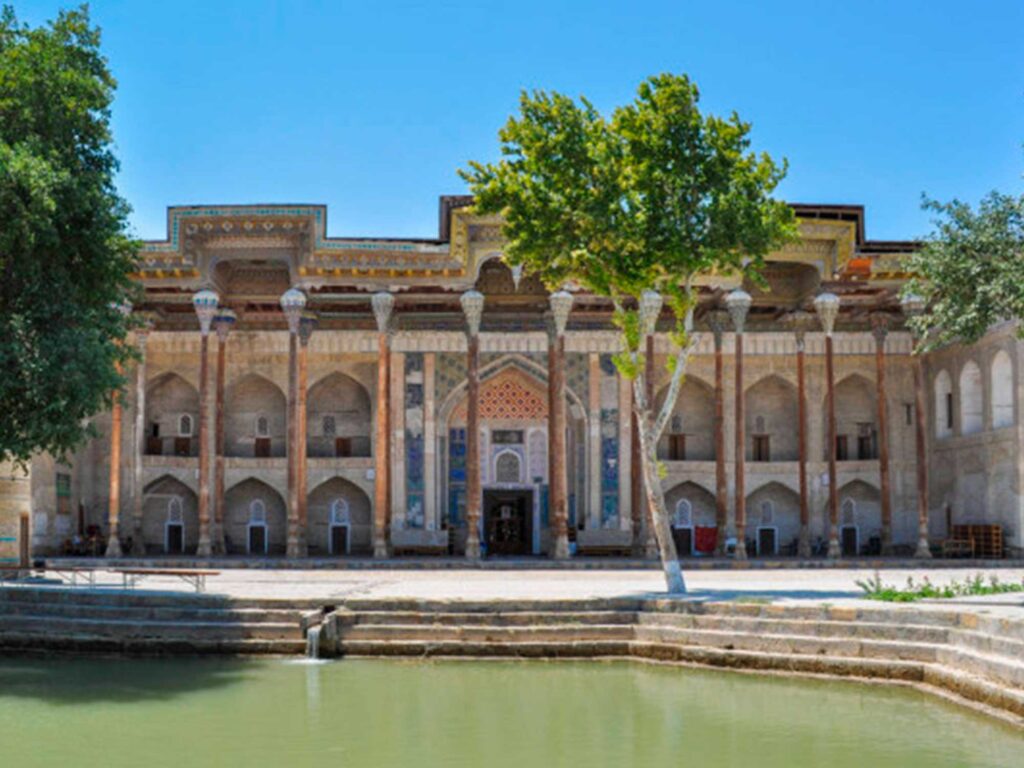 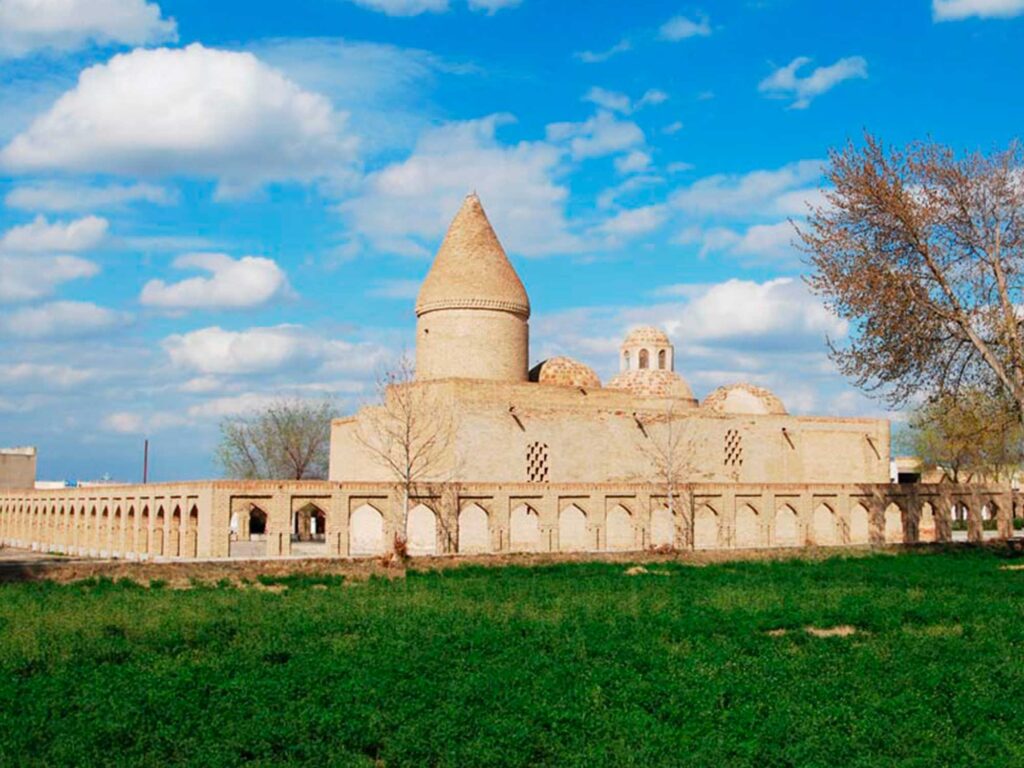 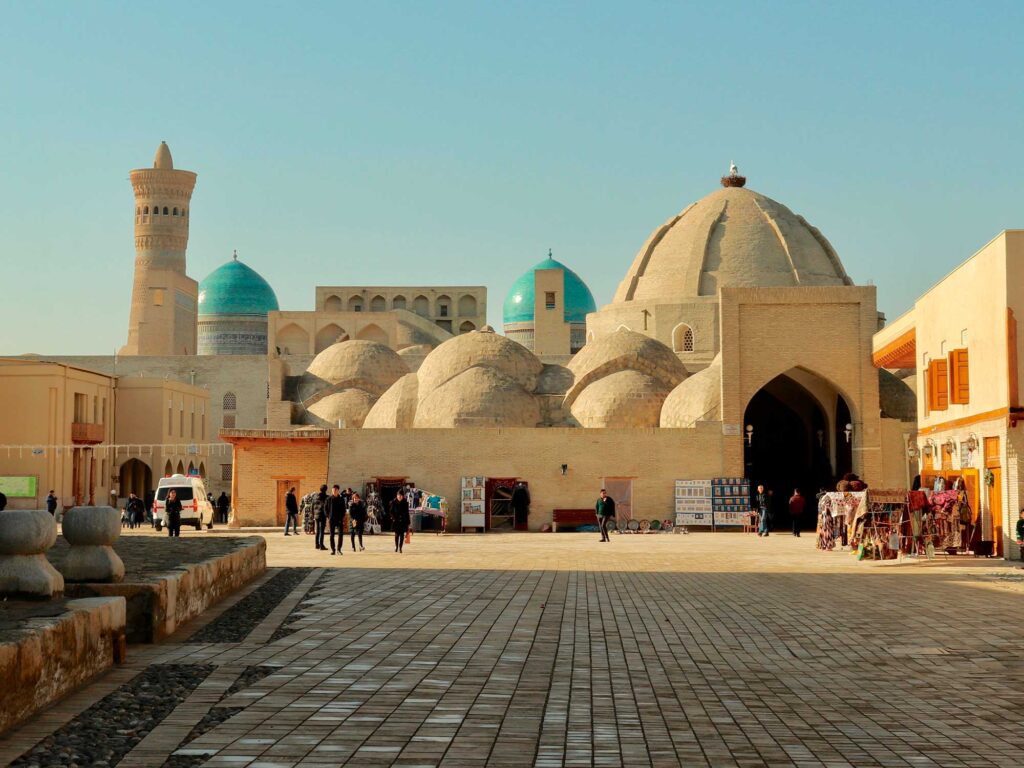 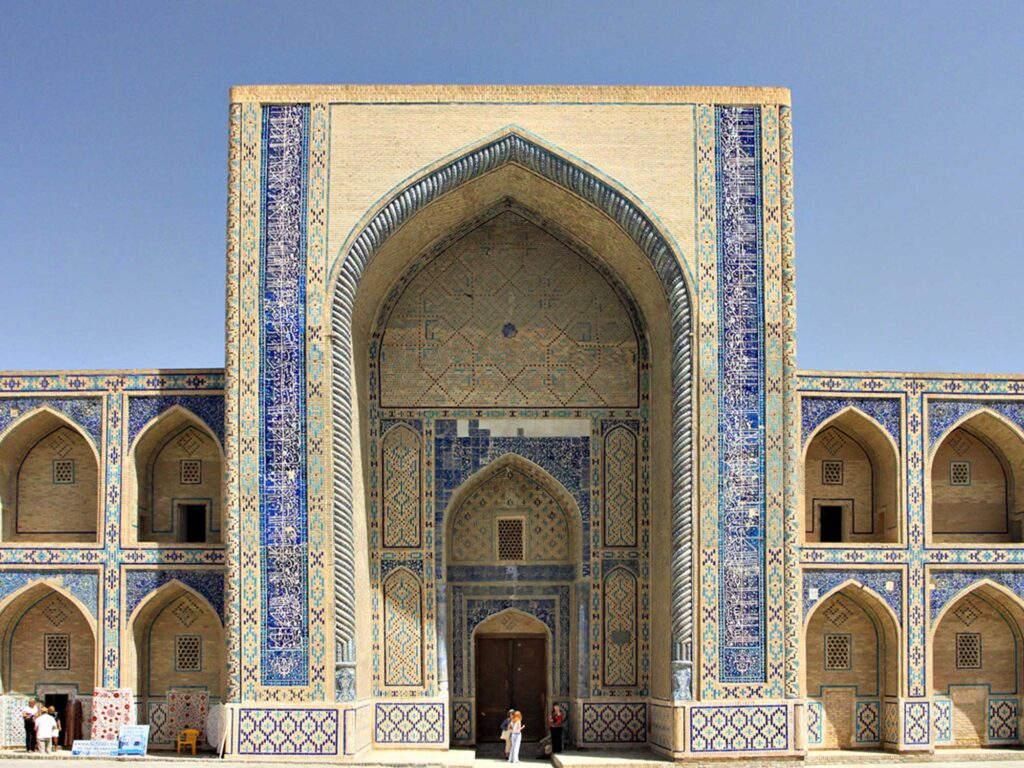 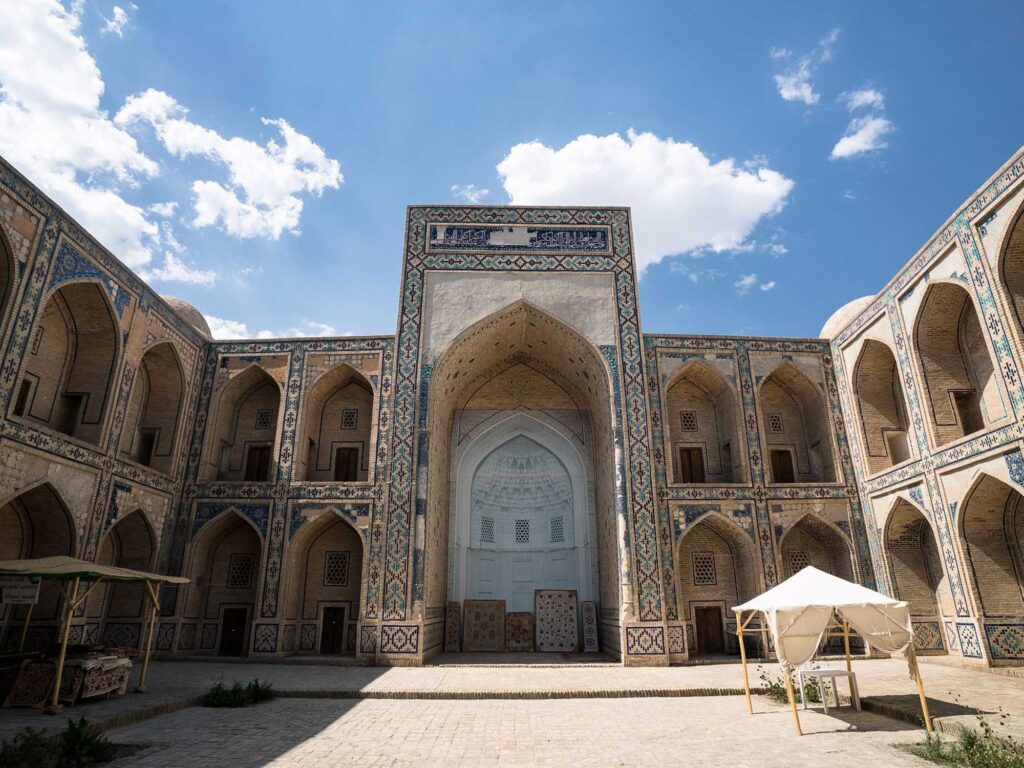 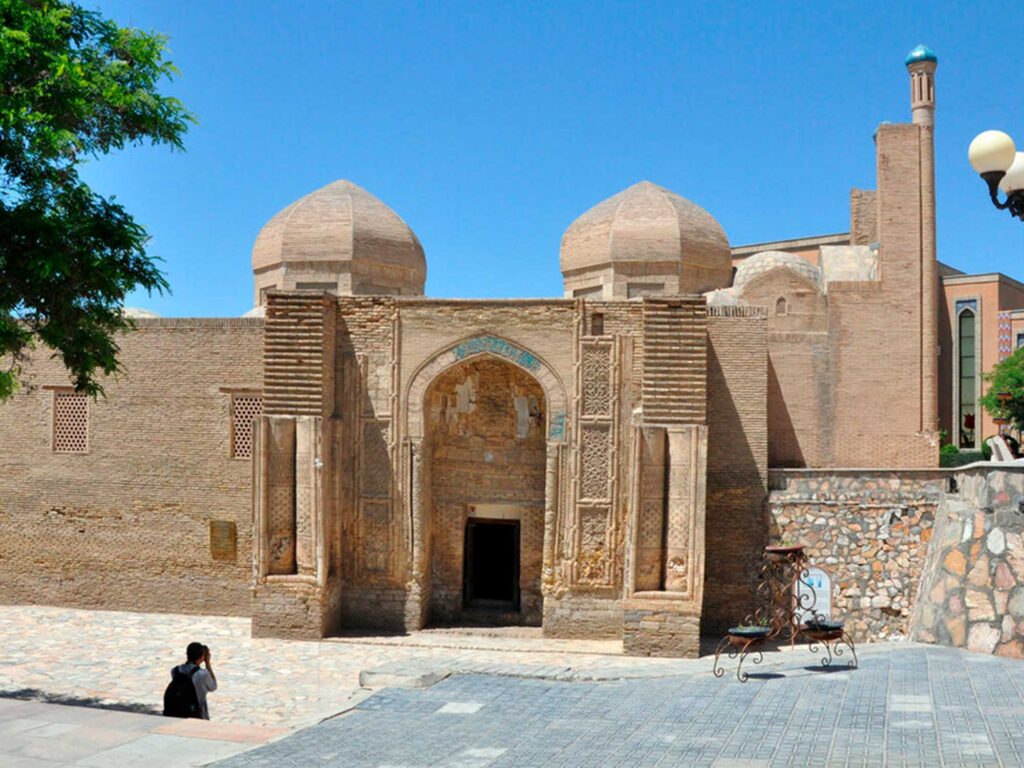 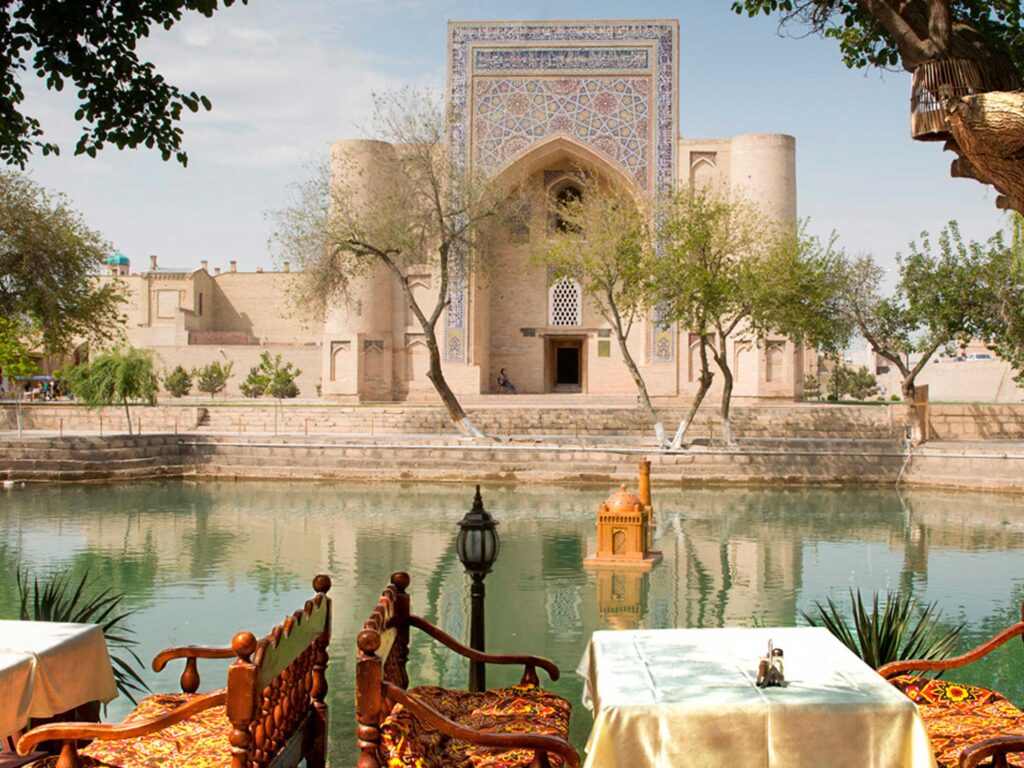 A one-day excursion around the city of Bukhara will give you the opportunity to get acquainted with the main attractions of the old city.

The tour starts from the ancient gates of Karakul, located at the outskirts of the city, and ends at the other end of the old city – at the historical complex Lyabi Hauz

Meeting with the guide at the hotel or at your designated place to start the excursion in Bukhara.

The Samanid Mausoleum – built in the 10th century is located in the northwestern part of Bukhara, Uzbekistan, just outside its historic center. It was built as the resting place of the powerful and influential Islamic Samanid dynasties that ruled the Samanid Empire from approximately 900 to 1000. It contained three burials, one of whom is known to have been Nasr II.

Chashma-Ayub Mausoleum is located near the Samani Mausoleum, in Bukhara, Uzbekistan. Its name means Job’s well, due to the legend in which Job (Ayub) visited this place and made a well by striking the ground with his staff. The water of this well is still pure and is considered healing. The current building was constructed during the reign of Timur and features a Khwarazm-style conical dome uncommon in Bukhara 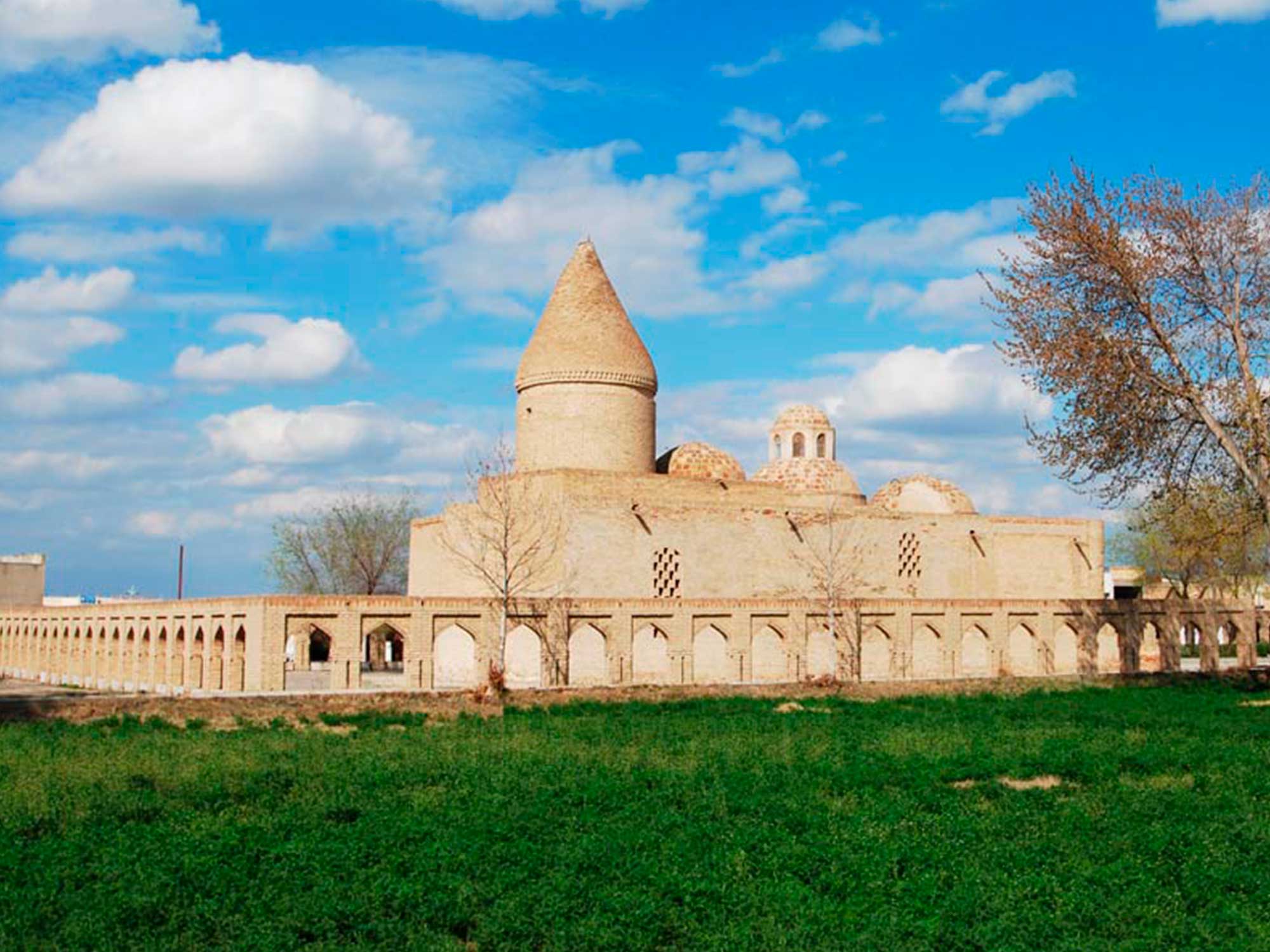 Bolo Haouz Mosque is a historical mosque in Bukhara, Uzbekistan. Built-in 1712, on the opposite side of the citadel of Ark in Registan district, it is inscribed in the UNESCO World Heritage Site list along with the other parts of the historic city. It served as a Friday mosque during the time when the emir of Bukhara was being subjugated under the Bolshevik Russian rule in the 1920s. Thin columns made of painted woods were added to the frontal part of the iwan (entrance) in 1917, additionally supporting the bulged roof of the summer prayer room. The columns are decorated with colored muqarnas. 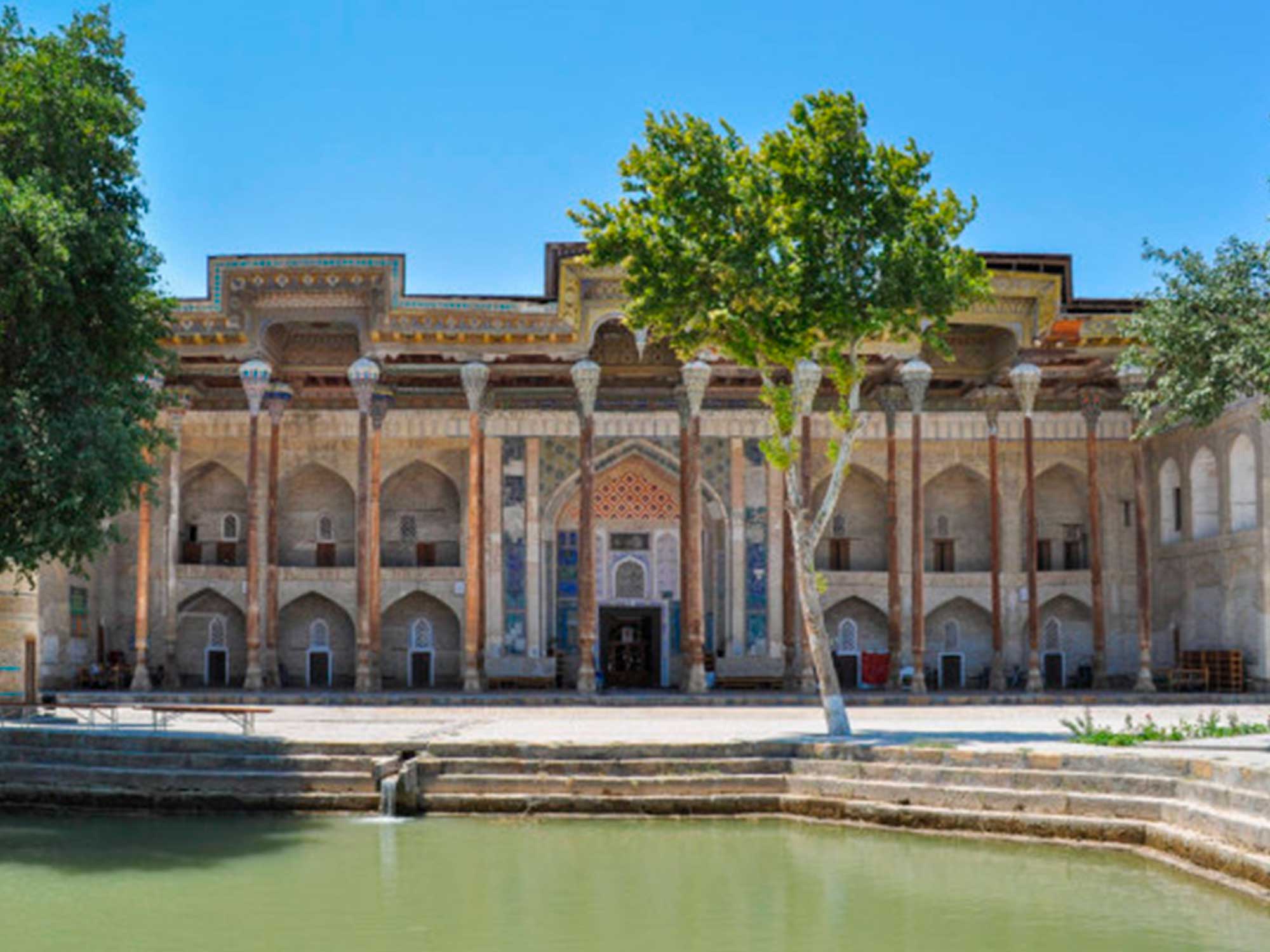 The Ark of Bukhara is a massive fortress located in the city of Bukhara, Uzbekistan, that was initially built and occupied around the 5th century AD. In addition to being a military structure, the Ark encompassed what was essentially a town that, during much of the fortress history, was inhabited by the various royal courts that held sway over the region surrounding Bukhara. The Ark was used as a fortress until it fell to Russia in 1920. Currently, the Ark is a tourist attraction and houses museums covering its history. 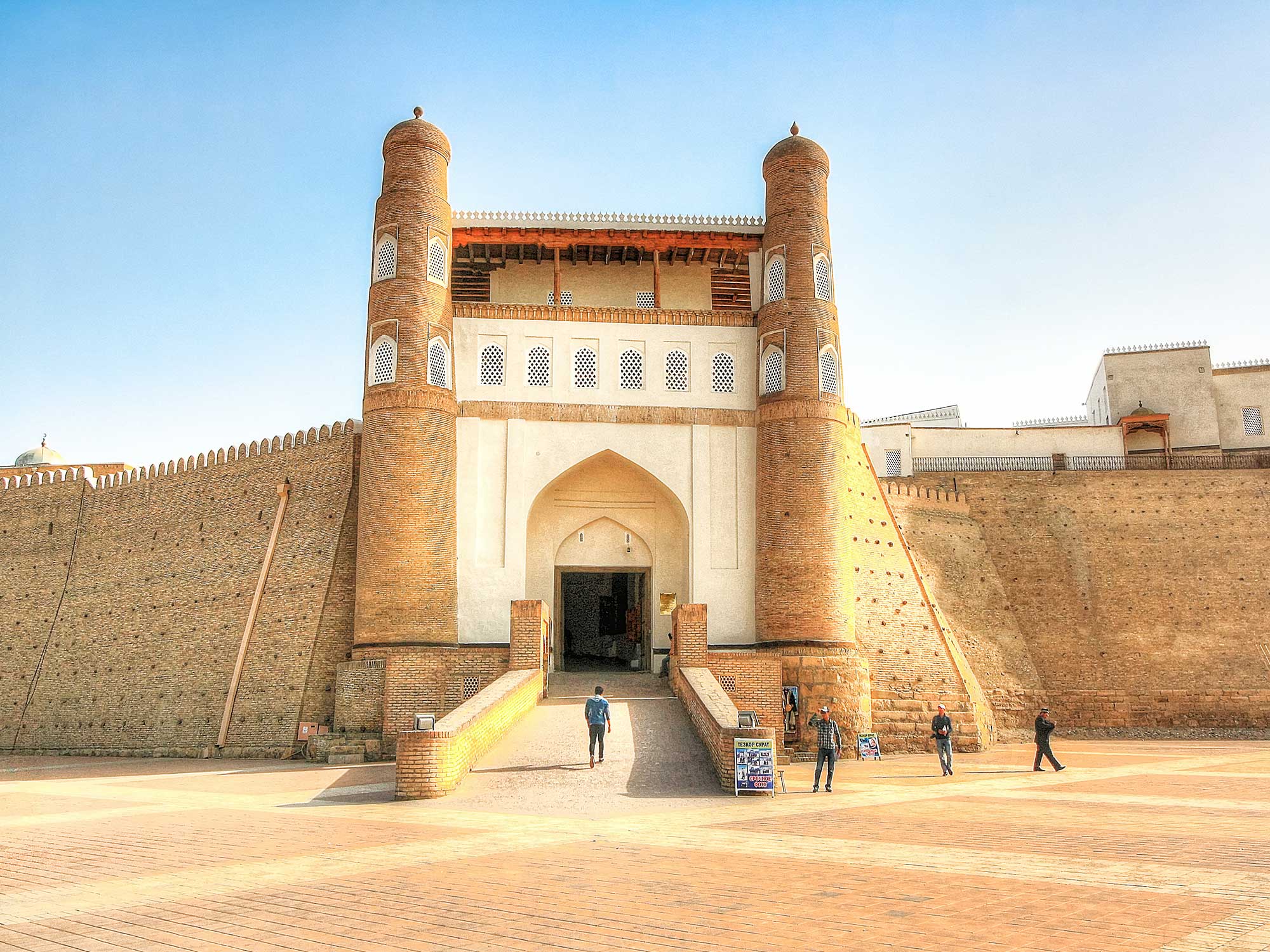 The Kalyan Minaret (Persian/Tajik: Minâra-i Kalân, Kalon Minor, Kalon Minaret) is a minaret of the Po-i-Kalyan mosque complex in Bukhara, Uzbekistan and one of the most prominent landmarks in the city.

The minaret, designed by Bako, was built by the Qarakhanid ruler Mohammad Arslan Khan in 1127 to summon Muslims to prayer five times a day. An earlier tower collapsed before completion. It is made in the form of a circular-pillar baked brick tower, narrowing upwards. It is 45.6 meters (149.61 ft) high (48 meters including the point), 9 meters (29.53 ft) diameter at the bottom, and 6 meters (19.69 ft) overhead.

There is a brick spiral staircase that twists up inside around the pillar to the rotunda. The tower base has narrow ornamental strings belted across it made of bricks which are placed in both straight or diagonal fashion. The frieze is covered with a blue glaze with inscriptions. 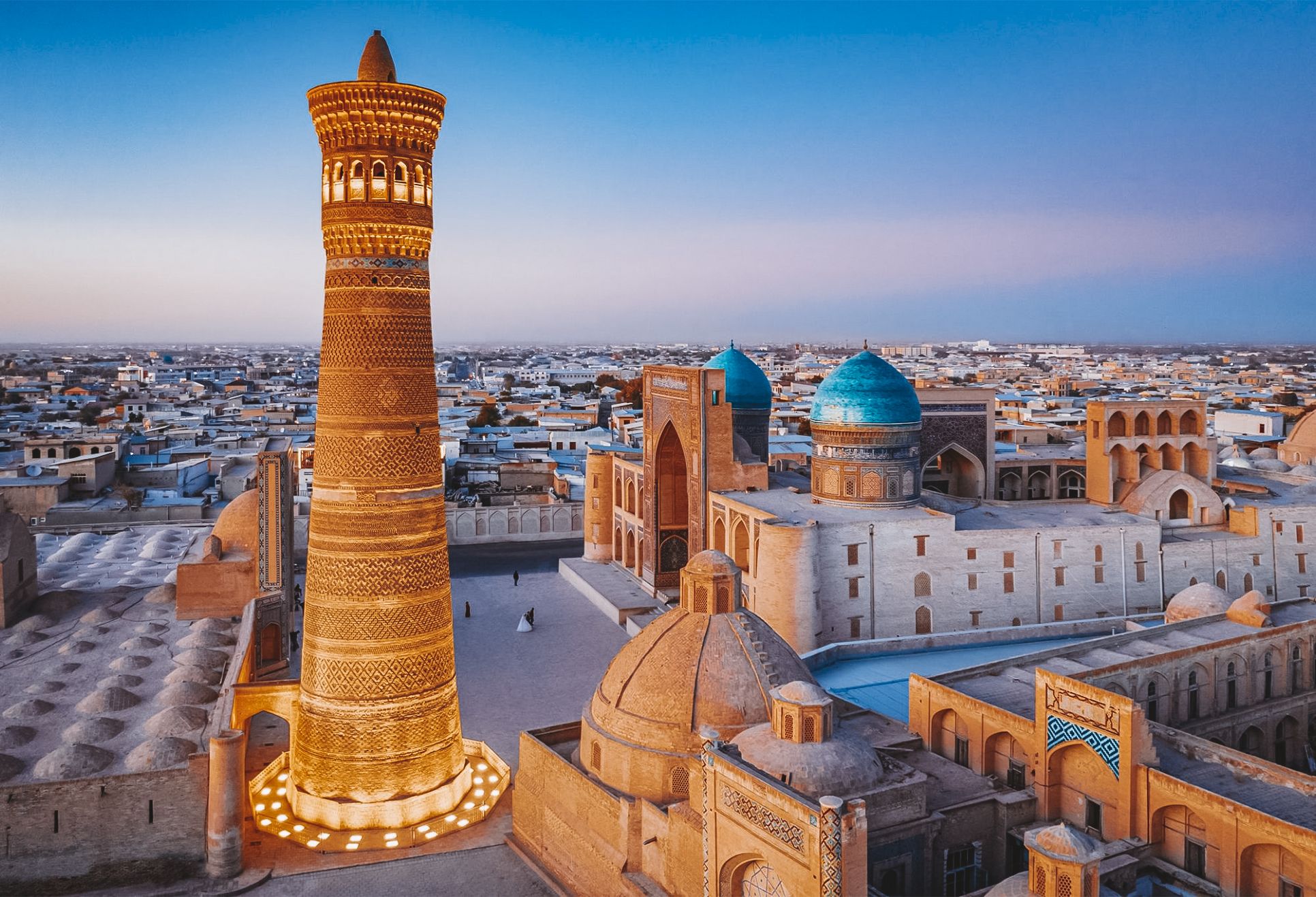 30 minutes
⠀ :
The Kalyan mosque and the Miri-Arab madrasah

Po-i-Kalan or Poi Kalan (Uzbek: Poi Kalon, Persian: پای کلان‎ Pā-i Kalān, which means “At the Foot of the Great One”), is an Islamic religious complex located in Bukhara, Uzbekistan. The complex consists of three parts, the Kalan Mosque (Masjid-i Kalan), the Kalan Minaret (Minâra-i Kalân) to which the name refers, and the Mir-i-Arab Madrasah. The positioning of the three structures creates a square courtyard in its center, with the Mir-i-Arab and the Kalan Mosque standing on opposite ends. In addition, the square is enclosed by a bazaar and a set of baths connected to the Minaret on the northern and southern ends respectively. The congregational mosque in the complex is one of the largest mosques in Central Asia, behind the Bibi Khanum mosque located in Samarkand, Uzbekistan, and the Great Mosque of Herat in Afghanistan. 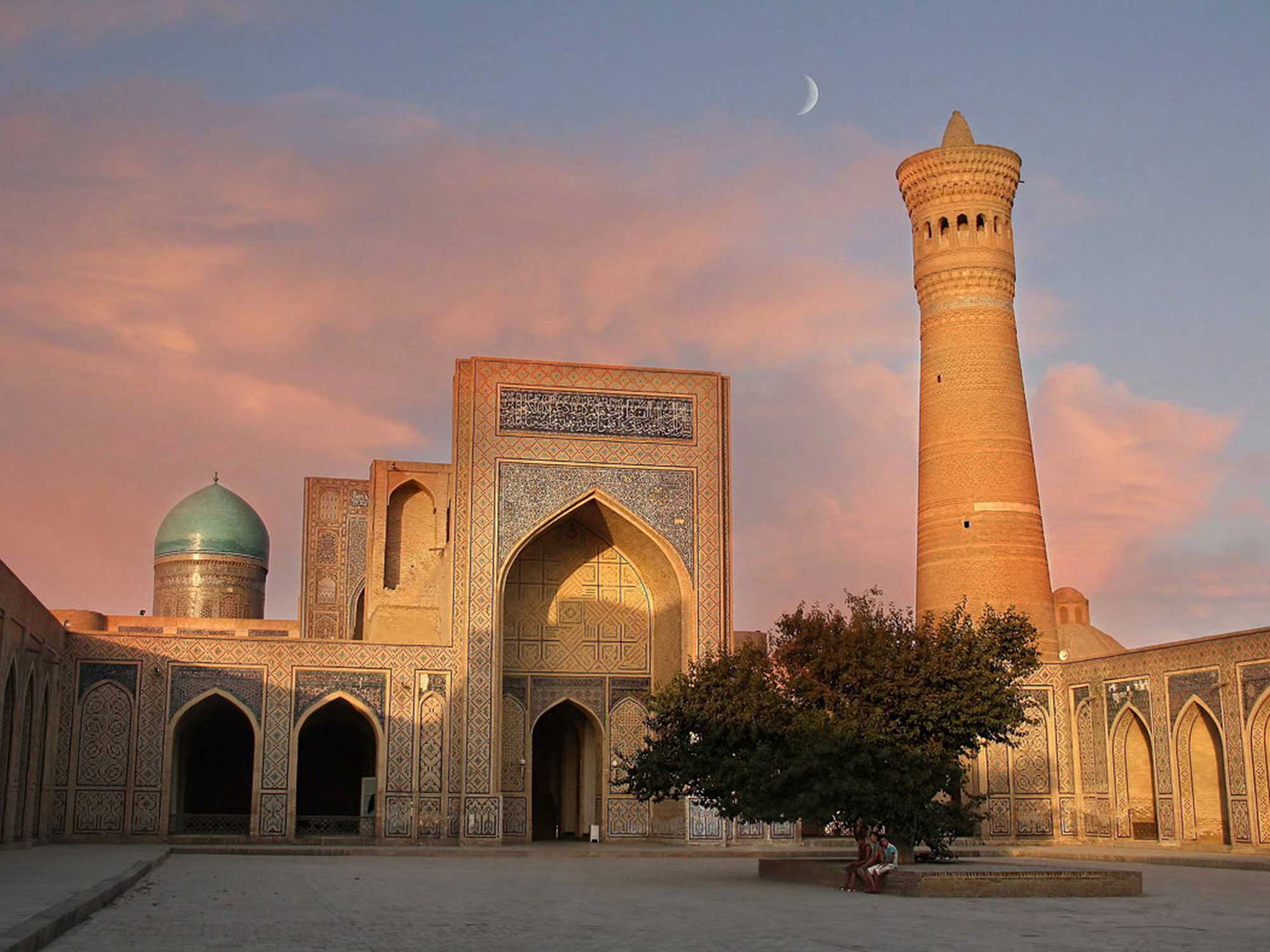 Toki-Sarrofon Trading Dome
Fast beside the Lyabi-Khauz there stands a dome with a cross-road running under it. Small shops are scattered around it. Once they’re located, one of the largest currency exchanges of Central Asia: merchants from India, China, and other countries change their money from money-changers, named the Sarraf’s. The name of the trading dome originated from them. But several centuries later one can only buy carpets, kerchiefs, and other souvenirs here.

Telpak Furushon Trading Dome
A little to the north from Toki-Sarrofon there located the large Telpak Furushon Trading Dome. This is a massive complex having a hexagonal orientation. Under its spherical dome there concentrate shops selling knives, pieces of jewelry, music instruments, and various remembrances. Next to it, there is a medieval blacksmith shop, where one can watch the process of manufacturing knives and other tools. Once the shops were selling a book, that is why the trading dome was called as Kitab-Furushon («kitab» is translated from Uzbek as “book”). Step by step the place of the book selling was occupied by shops trading headwear and later selling of caps in its turn gave place to souvenir products made by the local craftsmen.

Tim Abdullakhan Trading Dome
This trade dome differs considerably from its fellows. It is located not on the crossroad but along a street; it is an indoor premise where it is always cool. The light in the Tim Abdullakhan penetrates from small windows and apertures in the domes. Over the centuries they were selling carpets and fabrics, and even today one can buy a variegated carpet, beautiful in a wrought kerchief or a square of Bukhara cloth.

Toki-Zargaron Trading Dome
This is the largest trading dome of Bukhara. It is the most northern dome, and it is located fast beside the Poi Kalyan. The Toki-Zargaron dome is stretched upwards and strengthened with ribs, which make it different from the others. The name Zargaron is connected with the word “zargar” which can be translated as “goldsmith”. Once there located 36 jeweler’s workshop -shops selling various jewelry. In addition, Toki-Zargaron was the first among the trading domes of Bukhara. Today one can purchase their jewelry, kerchiefs, and various household accessories: Bukhara door handles, bells, a horseshoe for luck, etc. Ulugbek (also spelled Ulugh Beg, Ulughbeg, Ulugh-Beg), Tamerlane’s grandson, was an enlightened and intellectual ruler. He was very much concerned with the development of science in his large kingdom. Besides the well-known madrasah in the Registan Square in Samarkand and the madrasah in Gijduvan (Uzbek: G’ijduvon; also spelled Gizhduvan), he ordered that one be built in conservative and strict Bukhara, the Islamic capital of Central Asia, in the hope the city would become a center of science and education as well. Ulugbek Madrasah in Bukhara was for a long time followed as an example by builders of Islamic schools in other Central Asian cities. 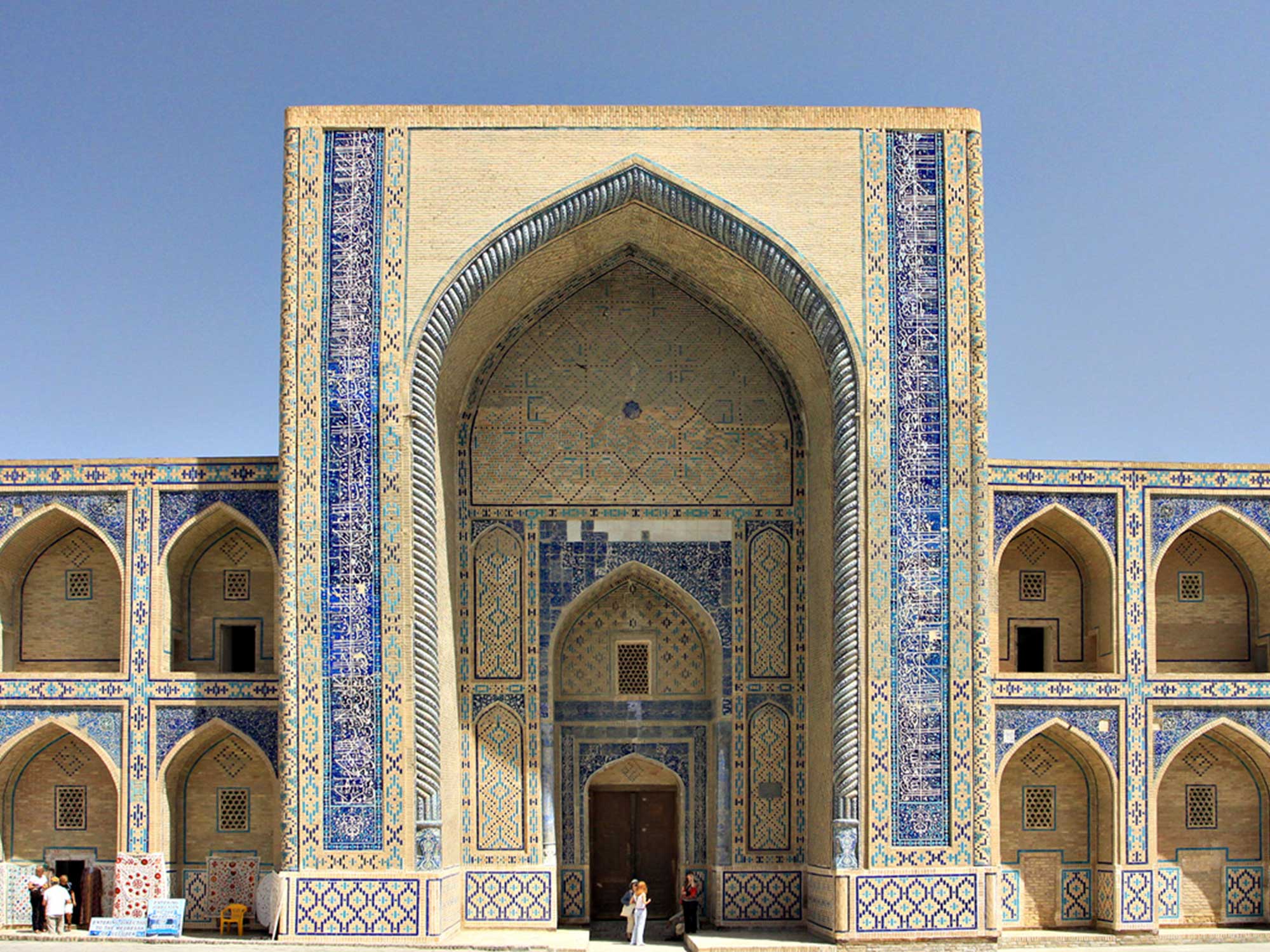 Opposite Ulugbek Madrasah there is Abdullazizkhan Madrasah. Abdullazizkhan built it in 1651 – 1652, and it is the last large Madrasah in Bukhara. The building is typical by composition, with a four-ayvans yard, but with unordinarily divergent fan of hudj groups after side ayvans and cupola buildings on the central axis. 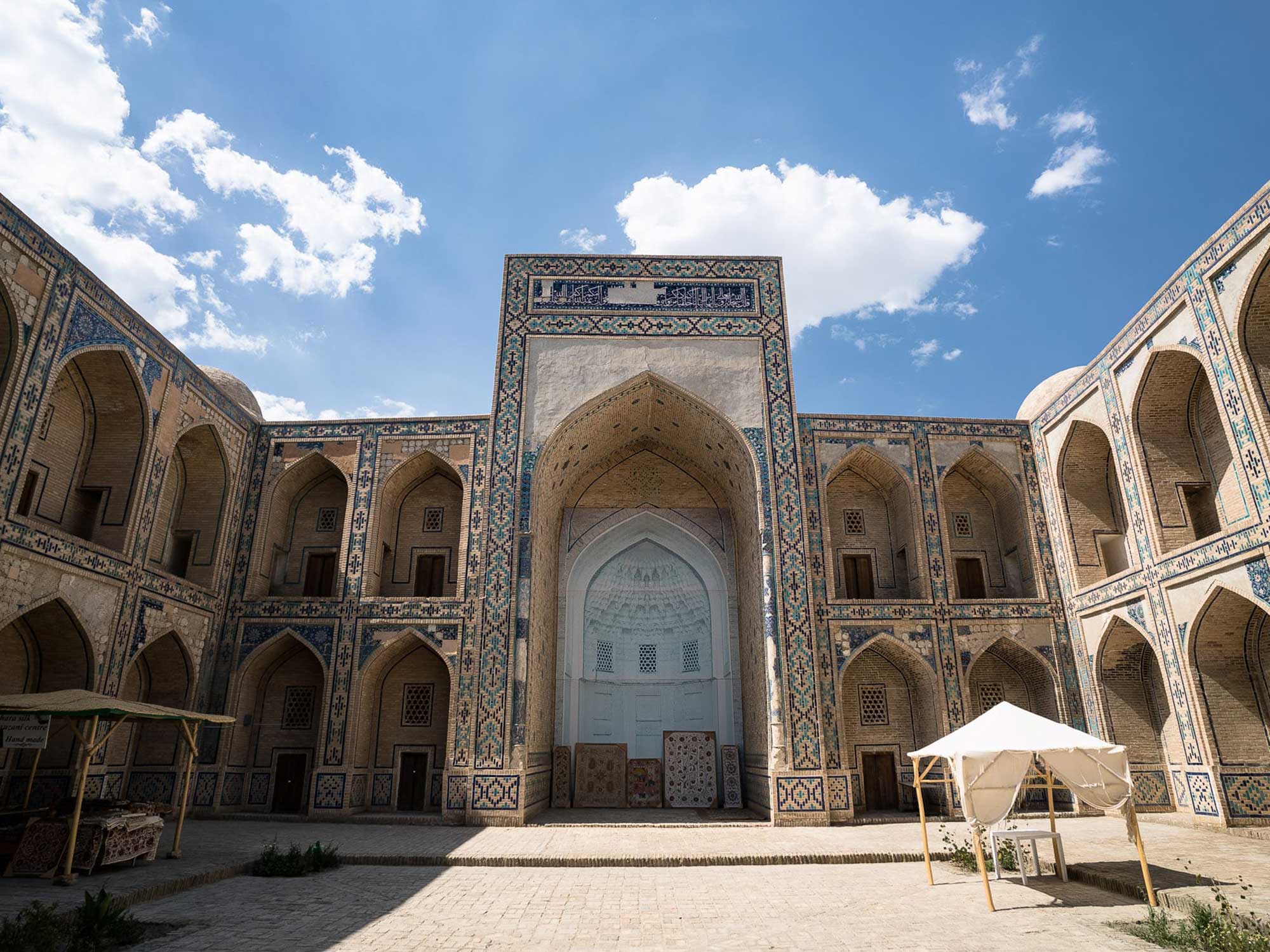 Maghoki Attori Mosque (Uzbek: Magʻoki Attori masjidi, Tajik: Масҷиди Мағокии Атторӣ, romanized: Masjidi Maghokii Attori, Persian: مسجد مغاکی عطاری‎, romanized: Masjed-e Maghākī-ye Attārī) is a historical mosque in Bukhara, Uzbekistan. It forms a part of the historical religious complex of Lyab-i Hauz. The mosque is located in the historical center of Bukhara, about 300 meters southwest of Po-i-Kalyan, 100 meters southwest of the Toqi Telpak Furushon trading dome, and 100 meters east of Lab-i Hauz. It is a part of the UNESCO World Heritage Site Historic Center of Bukhara. Today, the mosque is used as a carpet museum. 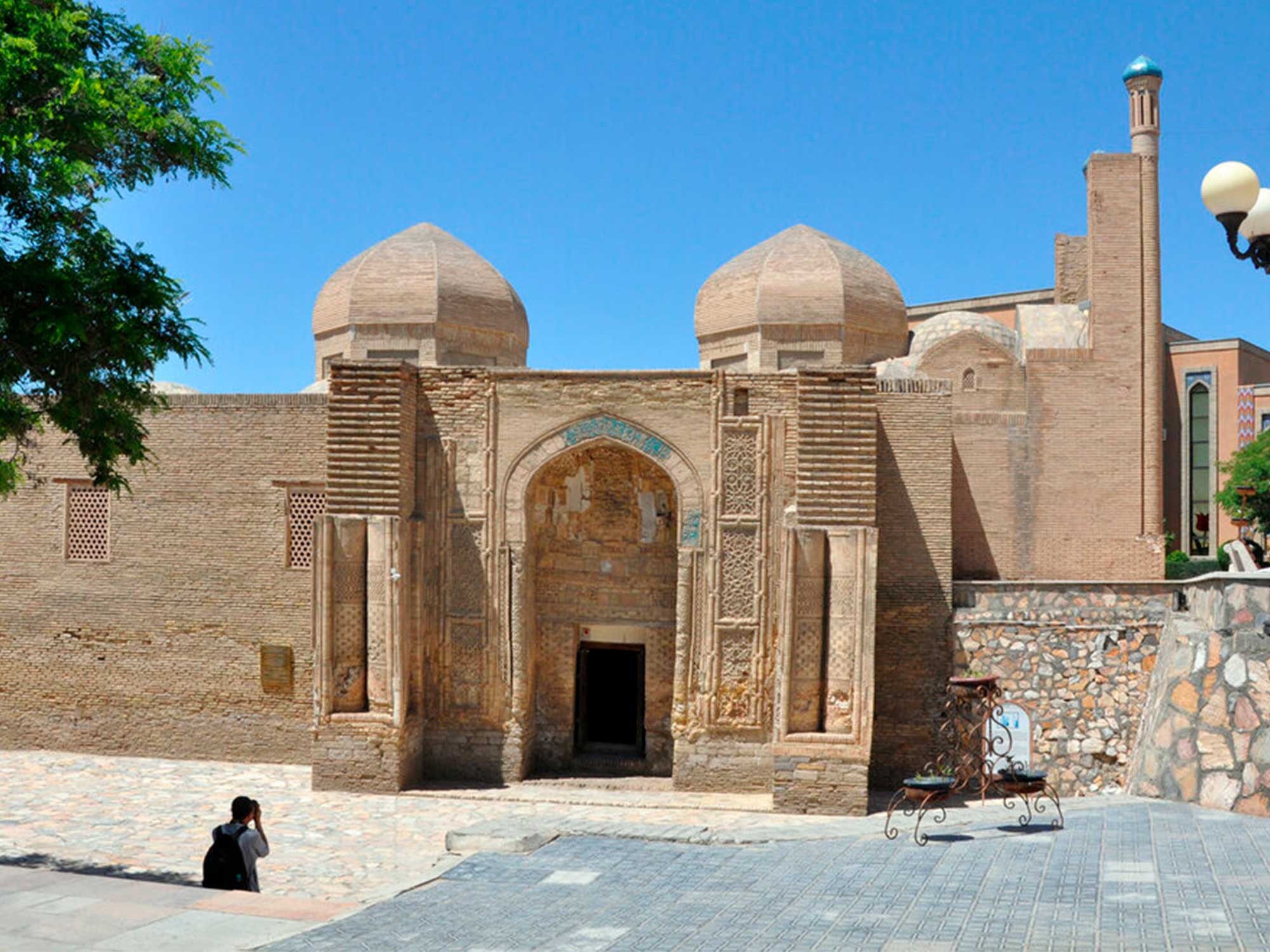 Lab-i Hauz (Uzbek: Labihovuz, Tajik: Лаби Ҳавз, romanized: Labi Havz, Persian: لب حوض‎, romanized: Lab-e Howz, meaning in Persian by the pool), sometimes also known as Lyab-i Khauz, a Russian approximation, is the name of the area surrounding one of the few remaining hauz pools that have survived in the city of Bukhara. Until the Soviet period, there were many such pools, which were the city’s principal source of water, but they were notorious for spreading disease and were mostly filled in during the 1920s and 1930s.

The Lab-i Hauz survived because it is the centerpiece of a magnificent architectural ensemble, created during the 16th and 17th centuries, which has not been significantly changed since. The Lab-i Hauz ensemble, surrounding the pool on three sides, consists of the Kukeldash Madrasah (1568-1569) (the largest in the city (on the north side of the pool), and of two religious edifices built by Nadir Divan-Beghi: a khanqah (1620) (a khanqah, or in Uzbek xonaqah, is a lodging-house for itinerant Sufis) and a madrasa (1622) (that stand on the west and east sides of the pool respectively. The small Qāzī-e Kalān Nasreddīn madrasa (now demolished) was formerly located beside the Kukeldash madrasah. 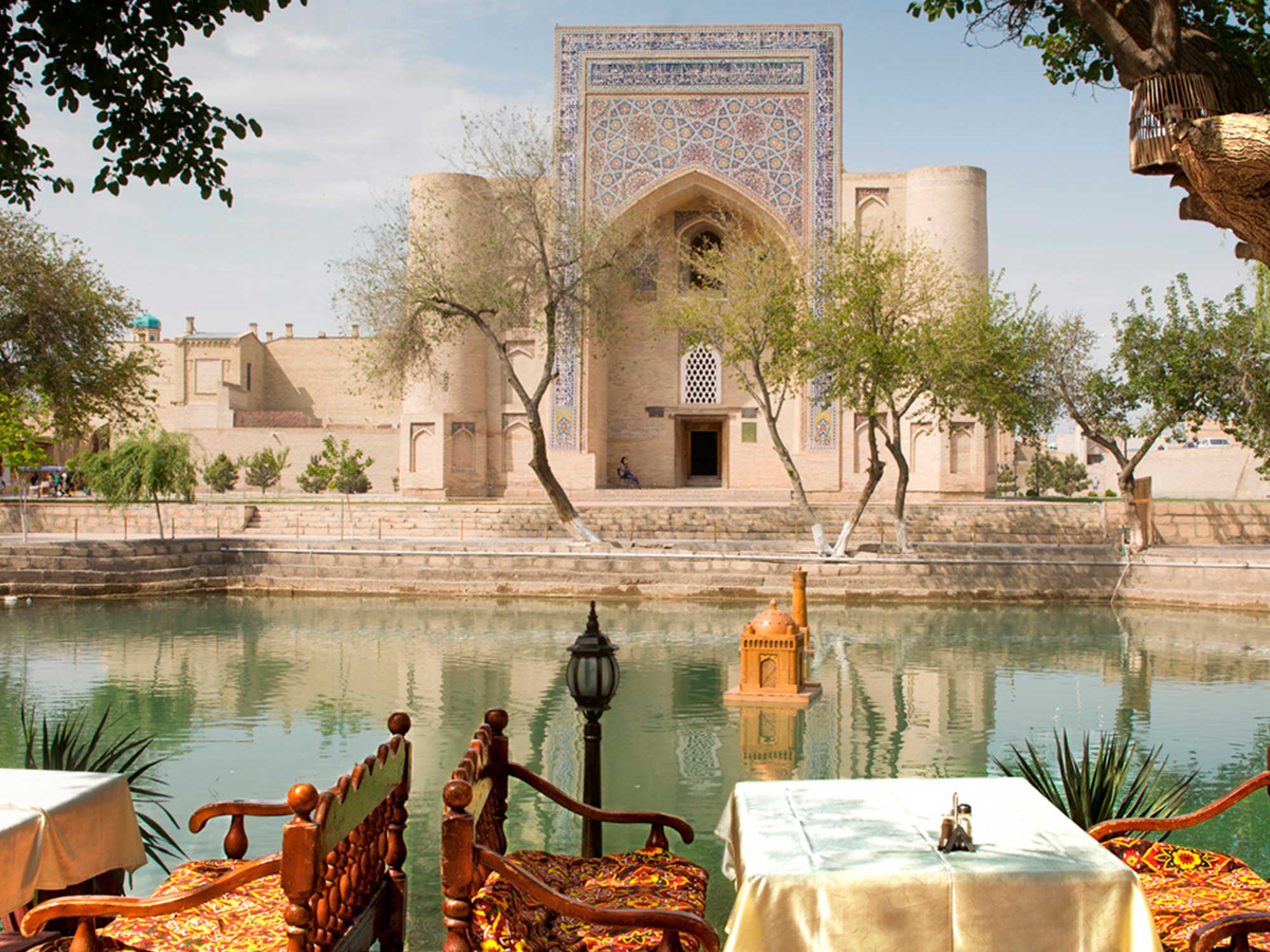