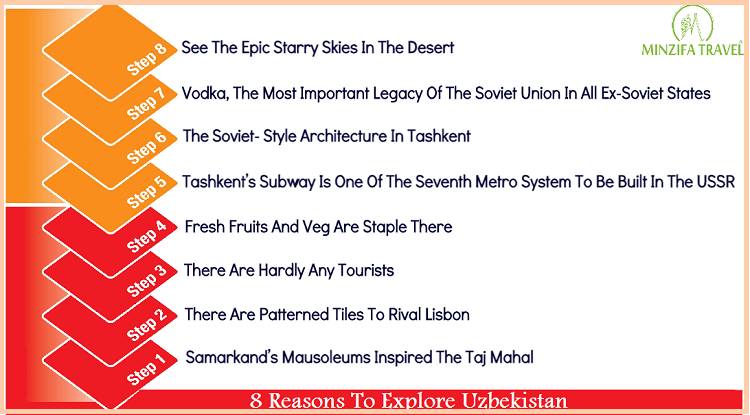 By completely getting squeezed between and landlocked by a bunch of other ’Stans such as Kazakhstan, Kyrgyzstan and Turkmenistan as well as Uzbekistan and much of this specific part of Central Asia has been ignored for years.

Actually, the country is home to an incredible number of camera-friendly mosques, mausoleums and madrasas in every shade of blue. Its century’s old long history under the Persian rule, as well as a key stop on the Silk Road, left a rich cultural and architectural legacy that had made all the more fascinating by the country’s time as an enclave of the Soviet Union.

The Uzbekistan Tours are going to show you a lot of action during your trip to the Silk Road country.

There Are Patterned Tiles To Rival Lisbon

There Are Hardly Any Tourists

Fresh Fruits And Veg Are Staple There

The Soviet- Style Architecture In Tashkent

Vodka, The Most Important Legacy Of The Soviet Union In All Ex-Soviet States

See The Epic Starry Skies In The Desert

These Uzbekistan Tours are the topmost eight reasons that will compel you to plan your expedition for our magnificent. We will provide you with all the info that you crave for. Please contact us.